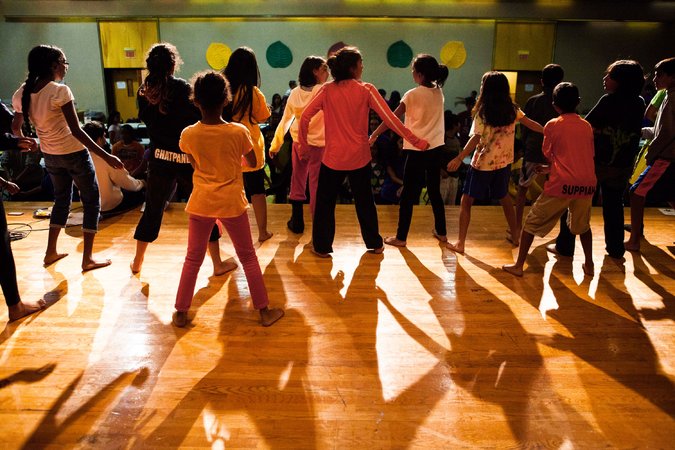 MACEDON, N.Y. — Just before the July a decade ago when Neha Dhawan turned 11, her mother informed her, “You’re going to Hindu camp this summer.” Invoking her most age-appropriate tone, Neha emitted a diffident, “Oh, yeah?”

Growing up Indian-American in Shreveport, La., was already a conflicted proposition for Neha. As the daughter of two immigrant doctors, she dutifully went with her parents to a Hindu temple and sat through their favorite Bollywood movies. In the other half of her hyphenated life, she joined her middle school’s pep squad and rarely missed an episode of “Lizzie McGuire.”

Despite her ardor to assimilate, she felt acutely set apart. There were maybe two or three other Indian families in her neighborhood. Classmates routinely asked where she went to church. Worst of all, a pupil at Neha’s middle school produced a “hit list” of students who were supposed to be killed, among them several of Indian descent.

So the last thing that Neha wanted that summer of 2004 was to be even more identified as an Indian and a Hindu. This Hindu camp, she figured, had to be for newbies to America. Neha could just imagine them, the girls with nose rings and oily braids, the boys with too-tight jeans and Bata flip-flops. Totally corny.

She did the only thing she could think of doing. The night before leaving for camp, she pretended she had seen a ghost in her bedroom and let out a shriek to peel the paint off the wall. Her mother, detecting the subterfuge, said that maybe Neha was not grown-up enough for summer camp. Neha relented and flew off to upstate New York, to the Hindu Heritage Summer Camp just outside Rochester.

That summer, she says now with retrospection, changed her life. She loved doing morning yoga, her hair still cool and damp from the shower. She discovered a favorite bhajan, a Hindu devotional song. She spoke with her peers and their college-age counselors about dealing with stereotypes and racism. “I realized,” she said, “it’s O.K. to be proud of who you are.”

On a late-July morning this summer, Ms. Dhawan stood in the camp cafeteria being serenaded on her birthday. At age 21, entering her senior year at Tulane, she is now the director of the Hindu Heritage Summer Camp, as well as the embodiment of its success in adapting the American tradition of summer camping for yet another immigrant stream.

From Y.M.C.A. camps through Catholic Youth camps through the Ramah camps of Conservative Judaism, there is a long, rich history of religious and ethnic groups using summer camps to strengthen the denominational and ancestral identity of young people in a polyglot nation with an enticingly secular popular culture.

The Indian immigrants who arrived in the last half-century are relatively recent and especially avid adopters. Shana Sippy, a professor of religion at Carleton College in Minnesota who has studied Hindu-American educational organizations, estimated that 135 such camps now exist. These range from overnight retreats to day camps to sleep-away programs like that of the Hindu Heritage Summer Camp.

A small portion of these camps, Professor Sippy noted, espouse the politics of Hindu nationalism — a potentially divisive premise, given the substantial presence of Muslims, Christians and Sikhs, as well as smaller religious minorities, in India. Most of the camps, though, aim to instill cultural knowledge and show children how to be confident in their Indian background and Hindu faith while feeling wholly part of the American mix.

“I have seen swamis playing games, throwing baseballs, eating ice cream sandwiches with the students and teaching them in very intimate and hands-on ways,” Professor Sippy wrote in an email. (A swami is a Hindu religious teacher.) “Time and again, parents and community leaders have recounted to me how the American conception of camp offers an opportunity for a cultural, religious and, in some cases, linguistic immersion with other American Hindu children. This is understood to be all the more important because within the dominant American and Christian culture, Hindus and Hinduism are often exoticized and maligned.”

Hindu Heritage Summer Camp’s approach is built around a set of hybrid rituals. That most dreaded staple of camp life, morning reveille, is blown on a conch shell in homage to Vishnu, the Hindu god often shown carrying such a shell. One recent morning, a breakfast of bagels and cream cheese was served to the soundtrack of club remixes of Hindu religious songs.

Between their wake-up call and the meal, the campers had assembled in a parking lot that included both a basketball court and a portrait of Lord Rama, another Hindu deity, made of colored rice grains. Gathered in a circle, about 150 children and counselors burst into “Rise and Shine,” an American Christian song about Noah’s Ark — a story that also happens to have a Hindu parallel in the myth of Manu, who helps to save humanity from a great flood.

The remainder of the camp day toggled between yoga, worship, drama, cricket, arts and crafts, classes on Hindu philosophy, and instruction in a folk dance from Gujarat called garba. After dinner, the campers re-enacted the Hindu festival of Holi, which observes the coming of spring, with an Indian-American version of color war.

Such programming attracted campers to fill all 200 slots over two two-week sessions this summer. Children came from as far as Texas and Florida in the United States, and from Belgium abroad. Several were the offspring of intermarried, interfaith families with African, Irish and Italian roots.

For Devi Parvati, 67, watching from the sidelines, the spectacle was dazzling and humbling. A Jew by birth who converted to Hinduism in her 20s, she had begun this camp in 1976 with six tents in the Pocono Mountains. Owing to a combination of expansion and financial problems, the camp moved to upstate New York during the 1990s. Here, it uses the facilities of the India Community Center, the hub of a large immigrant community drawn by Rochester’s research, medical and high-tech jobs.

Very much like Ms. Dhawan, 14-year-old Millena Sivakumar had fought against being sent to camp the first time — “bawling my eyes out,” as she recalled. This summer was her fifth in a row, and there are still tears, but of a different sort.

“We all become family,” said Millena, the daughter of a banker from Charlotte, N.C. “On the last day, everybody’s flowing rivers from their eyes.”