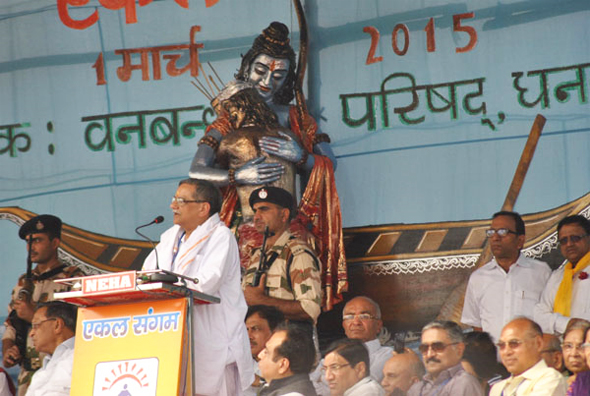 In the first week of March, ‘Parinam Kumbh’ (meaning ‘assessment’) of “Ekal Vidyalaya Foundation”, was convened at Dhanbad, Jharkhand, the birth place of ‘Ekal’, 25 yrs ago. More than 2,200 delegates from dozen countries came for this 3-day unique event to witness the transformation “Ekal” had brought to the overall development of rural masses in India. The goal, in the words of convener Shri Yogendra Tulsyan, was not only to bring in active supporters and partner-organizations of “Ekal” under one roof, but also to celebrate and, retrospectively, to take stock of Ekal’s success. It was also an occasion to pay tribute to Ekal’s late founder Shri Madanlalji Agarwala who established first ‘Ekal Vidyalaya’ in November 1988 in Laidvari tribal village near Dhanbad. As a dedicated ‘Pracharak’ of “Rashtriya Swayam Sevak Sangh” (RSS), when he asked the poor farmers how he can be of help to them, they requested him to make at least their children literate, so that they can avoid economic and social subjugation. The seedling that the visionary Madanlalji sowed, quarter century back has now prospered into the largest Literacy, Healthcare and rural development movement in India with supporting chapters in more than a dozen countries. Ekal has now 55,000 schools spread throughout India, including in Jammu-Kashmir and Nepal. Through ‘Ekal,’ almost 1.5 Million children are receiving basic education and healthcare training, each year.

The prominent dignitaries who presided over this mega convention were Ekal Chief Shri Shyamji Gupta, Chief Minister Shri Raghuvar Das, VHP Chief Shri Ashokji Singhal, Sadhvi Ritambaraji, and ZEE-TV Chairman Shri Subhashchandraji. At the mammoth public meeting, attended by over 50,000 people, Shri Ashokji, in his address emphasized that India needs to restore its lost identity and true character on the basis of self-respect and self-reliance. He further added that Ekal was started with this objective by late Shri Madanlalji. Shri Shyamji Gupta, who paid an eloquent tribute to Shri Madanlalji Agarwala for his pioneering efforts to spread literacy, gave an overview of the ecliptic progress Ekal had made to uplift forgotten masses in the villages. Di Di Ma Sadhvi Ritambaraji touched on the difficulties faced by the Volunteers and compared them with ever-loyal ‘Hanuman Sena’. The Chief Guest for this occasion was RSS Chief, Shri Mohanji Bhagwat. In his address to the delegates, Shri Mohanji challenged them to explore possibilities where, ‘Ekal’ as a rural support-vehicle, could be taken further with changing times and in favorable political climate. There were several presentations by various Ekal alumni groups whose main theme was the empowerment that Ekal had brought to their lives. According to them, this was facilitated, not only by education, and infrastructure of self-reliance that Ekal had provided, but also, by its awareness campaign for one’s ‘right to information’ in the face of bureaucratic hurdle. Some of these people are now even playing leadership roles at the district level. ‘Pinki Karmakar’ who carried the Olympic torch at London Olympiad and became a national inspiration for the youths few years back, was an Ekal alumnus. There were several testimonials by rural-folks which portrait their success at tackling social ills like bonded labor, mass drunkenness, spread of epidemics, migration of youths to urban areas, and blatant corruption in their community.

“Ekal Vidyalaya Foundation of USA”, has played a very significant role in the expansion, progress and success of ‘Ekal Abhiyan’ (Ekal-India) for more than two decades. ‘Ekal’ as it is known today had started out as ‘One-Teacher School Project’ in India as well as in USA. For last few years, Ekal-USA has been raising $4 to 5 Million U.S. Dollars through its fund-raising concerts, all over USA. This year’s concerts artists are Bollywood Melody Makers “Rana Chaterjee and Sangeeta Melekar” and they will be performing at more than 50 places. Their sold-out concerts are already under way since February. For more information on Ekal concert in your vicinity and to get involved please kindly visit www.ekal.org. Your generous support for this worthy cause shall be appreciated.