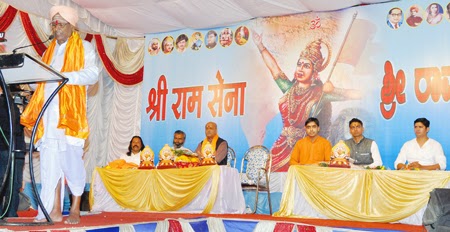 Belgaum (Karnataka) : Let us fulfill the dream of our revolutionaries of Akhand Bharat by incorporating Pakistan and Bangladesh. Each home should have a sword to fight against atrocities. The founder of Sriram Sena, Shri. Mutalik invited all present there saying, ‘Let us resolve firmly to create Akhand Bharat honouring the song ‘Vande Mataram’, on this occasion.

Akahnd Bhatat Sankalp day was celebrated hoisting the National Flag on behalf of Sriram Sena at midnight of 14th August. He was addressing the gathering at that time. More than 7000 devout Hindus attended the programme. The programmed commenced with worshipping the picture of Bharatmata at the hands of Vedmurti Pujya Siddharam Swamiji from Khanapur followed by the song ‘Vande Mataram’. Shri. Sunil Aptekar, the winner of Eklavya Award was presiding over the function.

Vedmurti Pujya Siddharam Swamiji said, Hindu Dharma expresses its feeling by saying that, ‘सर्वे भवन्तु सुखिनः । – All should be happy’ and abide by it. Hindus should follow that in their day to day life.

Ramayan and Mahabharat should be taught in every school ! – Ramakant Konduskar

Shri. Ramakant Konduskar said that, independent Bharat has been made hollow by corrupt officers and politicians. Country’s Defense Minster should be tough like Shri. Narendra Modi. Politicians offer 3 lacs of rupees to the winners in the Commonwealth Games; but offers only a lac to martyrs. Adhar Cards are easily available to infiltrators from Bangladesh; but the local residents are deprived of the same. Muslims are given grants for Haj pilgrimage; but warkaris do not even get water during their wari (Unique procession). Many ‘Days’ are celebrated blindly following the Western culture. As a result there is a rise in the incidents of rape and atrocities on women. There is a big conspiracy hatched to defame H.H. Asaram Bapu. In order to bring about a change in this situation, schools should compulsorily include ‘Ramayan’ and ‘Bhagvadgita’ in their curriculum.

Hindu Nation to be established on the strength of Dharmakranti (Revolution for Dharma) only ! – Abhijit Deshmukh

While addressing the devout Hindus there, Shri. Abhijit Deshmukh of Hindu Janajagruti Samiti, Pune said that, there are 65 thousand slaughter houses in the country. Why are the politicians are so hostile about closing them ? Secular politicians will never be able to establish a Hindu nation. Hindu Nation cannot be established through elections. That is possible only by Dharmakranti. In order to stop the pampering of minorities Dharmakranti is the only solution. Therefore it is the need of the hour that each one has to increase one’s own physical, mental and spiritual strength.

1. Holy-text stall that was put up at the venue by Sanatan Sanstha got very good response.

2. A muslim youth was video shooting the programme; but when the activists of Sriram Sena realised it they caught him and was handed over to the police after a reprimand. He was trying to misguide the activists by saying that he was a Hindu.