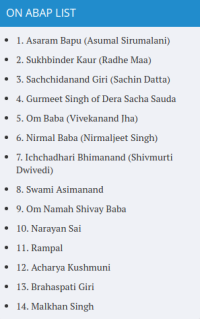 The Akhil Bharatiya Akhara Parishad(ABAP), the apex body of Hindu sadhus, released on Sunday what it said was a list of fake saints even as it demanded a crackdown on “rootless cult leaders”.

The move by the ABAP, which is an umbrella organisation of 13 recognised akharas, or monastic orders, came against the backdrop of a series of controversies surrounding self-styled godmen, including Dera Sacha Sauda chief Gurmeet Ram Rahim Singh who has been convicted of rape.

Releasing the list—which includes Gurmeet Ram Rahim Singh, Haryana cult leader Rampal, rape accused Asaram and his son Narayan Sai, the group’s president, Swami Narendra Giri, said: “We appeal to even the common people to beware of such charlatans who belong to no tradition and by their questionable acts, bring disrepute to sadhus and sanyasis.”

After a brief meeting attended by representatives of various akharas at Math Baghambari Gaddi in Allahabad’s Allahpur, Giri made the names public and said these self-proclaimed godmen were maligning the image of saints.

“We are going to send copies of this list to the Centre, the state governments as well as all the opposition parties with the demand that a strong legislation be brought to check the activities of these self-styled cult leaders,” Giri told reporters.

He said the ABAP will release another list of 28 fake godmen after Diwali, and appealed to boycott these so-called spiritual gurus. – Hindustan Times, 11 September 2017