Arrogance of fanatics continues even in BJP rule as was in Congress rule ! Would Hindus ever experience ‘Good days’ (अच्छे दिन) under these circumstances ? 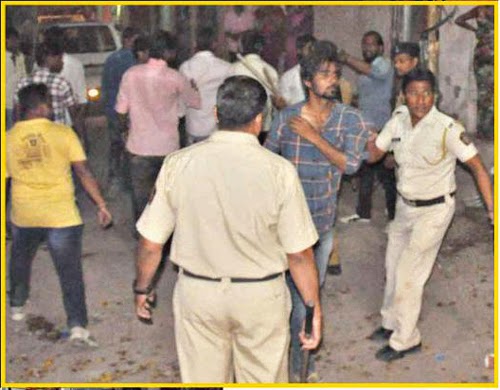 Sambhajinagar : Enraged by the ecstasy of Hindus participating in  Shiv-jayanti procession, fanatics caused commotion in Sanjayanagar of the city by shouting slogans of ‘Alla-Hu-Akabar’ and pelting stones from the by-lanes and houses at the procession. ( Due to appeasement of fanatics by all-party rulers so far, the fanatics create obstacles in the Hindus’ festivals ! – Editor, Dainik Sanatan Prabhat ). Hindus gave a fitting reply to the gangsterism of fanatics. However, the Police, which reached the spot cane-charged only Hindus. ( If the Police, unnecessarily persecuting Hindus, are injured by fanatics in the riots, would they ever earn the sympathy of Hindus ? Such policemen would be punished by making them perform severe sadhana in Hindu Rashtra.! –  Editor, Dainik Sanatan Prabhat ) The Police indiscriminately cane-charged Hindus, which resulted in injuries to 8 persons. The situation is tense in the area.

Shiv-jayanti festival was celebrated with enthusiasm on 8th March as per Hindu calendar. When the procession was taken out from Sanjaynagar-Baijipura and proceeding opposite Aslam mosque, mob of fanatics gathered there, and started shouting slogans and pelting stones at the procession. When the news that procession was stopped spread, Hindus took to the streets and confronted the mob of fanatics. Both sides started counter slogans. The Police reached the spot. When Hindus told them that unless the action was taken against stone-pelting fanatics, the procession would not move forward. At that instant, the Police started cane-charge, in which few children and women were also injured. Few policemen kicked on the doors of Hindus’ houses. ( The psychologically circumcised Police cane-charge to disperse only Hindus, but get scared while confronting fanatics. To stop such a slovenly secularism of the Police, establish the Hindu Rashtra ! – Editor, Dainik Sanatan Prabhat )

On learning the occurrence of incident, Jilhapramukh of Shiv Sena Mr. Ambadas Danve and other office bearers of Shiv Sena rushed to the spot. Mr. Danve insisted that the procession would continue with enthusiasm despite commotion caused by the fanatics. When the tension subsided, the procession continued further along with the band.

In order to gain advantage of the incident leader of MIM Dr. Gaffar Kadari reached the spot. However, he had to go back as the crowd of Hindus were upset by his presence.