B R Shetty, chairman of NMC Group and Navdeep Suri, Indian ambassador to the UAE who were present, also laid foundation stones and cement to complete the ceremony. 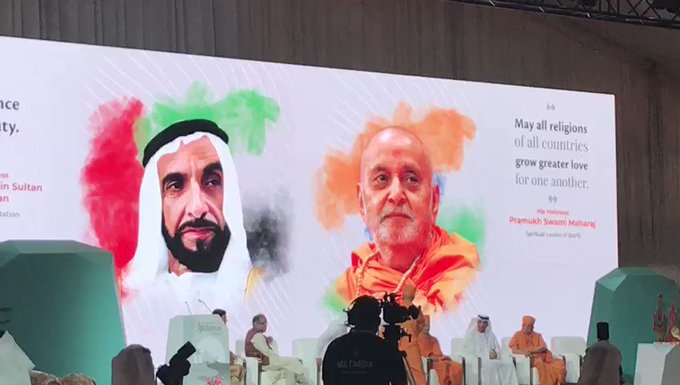 A virtual presentation of the first historic Hindu temple to be built in Abu Dhabi was made by the BAPS Swaminarayan Sanstha at the Shilanyas ceremony. It was witnessed by the Indian and UAE dignitaries

The BAPS Hindu Mandir is located at Abu Mureikha, E11 Expressway, Exit 366 Abu Dhabi. BAPS is responsible for building the temple. The sanctification of the land was performed at the site in Abu Mureikhah area on February 11, 2018.

The temple is being built on 13.5 acres of land gifted by His Highness Shaikh Mohammad Bin Zayed Al Nahyan, Crown Prince of Abu Dhabi and Deputy Supreme Commander of the UAE Armed Forces, to the Indian community. In the Year of Tolerance, the UAE government has gifted an equal area of land additionally for building parking facilities in the temple premises.

Abu Dhabi, Apr 20: A Hindu temple that is being entirely built out of stones is being constructed here for the first time. Foundation stone laying ceremony for the temple began at the site where the temple will come up on Saturday April 20. Mahant Swami Maharaj, spiritual leader of Swaminarayan Sanstha that will construct the temple, will guide the procedures.

UAE foreign affairs and international cooperation minister, Sheikh Abdullah Bin Zayed Al Nahyan, and minster for tolerance, Sheikh Nahyan Mubarak Al Nahyan, will garce the occasion. A number of leaders of various sectors including spiritual and social, along with thousands of believers will get together for the occasion at Abu Murelkha near Al Rahba to participate in the programme.

On his arrival, Swami Maharaj and others including priests from India who accompanied him were given a grand reception on arrival by Sheikh Nahyan on Friday at Al Maktoum international airport. Children in traditional attire gave the spiritual leader a floral welcome.

Pink sand stones are being used to lay the foundation of the temple. The priests offered puja to them besides performing holy rituals lasting a few hours. These stones have been brought from Rajasthan in India.

The temple complex will also have cultural complex, library, and other facilities. For participation in the function, passes were distributed in advance to those who donated Dh 2,500 or Dh 5,000 for the construction of the temple, in the form of ‘Yajaman Seva’.