One may think that are Hindus, following perverted traditions like ‘Valentine Day’ when ‘Gou-rakshaks’ are being attacked, not fit to die at the hands of butchers ?

Panaji (Goa) : Shri. Hanumant Parab, the President of ‘Gou-vansh Raksha Abhiyan’, Goa and Shri. Amrut Singh, the President of ‘Animal Rescue Squad’ were brutally attacked by fanatics in the night of 12th February around 9.30 p.m. in Chorla Ghats. Shri. Parab and Shri. Singh had gone to meet the Superintendent of Police of Belgaum, Karnataka to lodge complaint against a gang which supplies beef in Goa.

They were returning to Goa in a vehicle. Fanatics got information that the ‘Gou-rakshaks’ had left Belgaum. 5 fanatics left Goa in one vehicle (Innova) to stop the ‘Gou-rakshaks’ in Chorla Ghat at a deserted spot and as soon as they saw their vehicle, it was stopped; but ‘Gou-rakshaks’ could not come out. As a result, the fanatics broke glasses of their vehicle and beat them up with sticks. Shri. Amrut Singh sustained serious head injuries and Shri. Parab has also got hurt. In this attack, driver Shri Vasudev Zarekar has been injured too. ‘Gou-rakshak’s vehicle is severely damaged in this attack.

The fanatics were then all ready to set the vehicle on fire along with ‘Gou-rakshaks’; when 3 vehicles passing by reached there. ‘Gou-rakshaks’ tried to shout and draw attention of the passing vehicles but fanatics tried to shoo them away. Two vehicles left but driver of 1 vehicle did not get scared and stopped; as a result, fanatics ran away. Injured ‘Gou-rakshaks’ crossed the ghat in the other vehicle and contacted Shri. Rajendra Kerkar, an environmentalist. Later, Shri. Amrut Singh and Shri. Parab were taken to Government hospital at Sakhali in the private vehicle of Shri. Kerkar.

Shri. Amrut Singh’s head has been fractured and he has suffered hemorrhage. He is being treated at Goa Medical College, Bamboli and is stated to be stable now. Shri. Hanumant Parab has been discharged after treatment.

Fanatics were keeping a watch on the vehicle of Shri. Parab and Shri. Singh from Belgaum and it was noticed by two members of Sriram Sene. As ‘Gou-rakshaks’ started their journey back to Goa, they were stopped at a deserted place in Ghats region, followed with the above incident which shows that the brutal attack was a pre-planned conspiracy.

We condemn the attack on Shri. Hanumant Parab and Shri. Amrut Singh. Police should immediately arrest the assailants and take stringent action against them. Failure of police in taking action will lead to intense ramifications in Goa and the State Government and police would be responsible for law and order problem, warned Shri. Kamalesh Bandekar, State In-charge of Bharat Swabhiman. 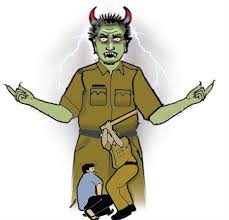 Incidents of illegal cow-slaughtering and sale of beef are on rise since last two years in Goa; still, police have not taken action on their own in any of the cases. ‘Gou-rakshaks’ have raided such places putting their life in danger but police have not even pretended to take any action. Such indifference of police has increased insolence of fanatics and they have dared to attack Gou-rakshaks twice. It is a matter of shame for the protectors of law. BJP Government has not exhibited will to stop such biased behavior of police. If the Government and police are going to continue their policy of appeasement of minorities, Hindus will have to take revolutionary stand for protection of cows.