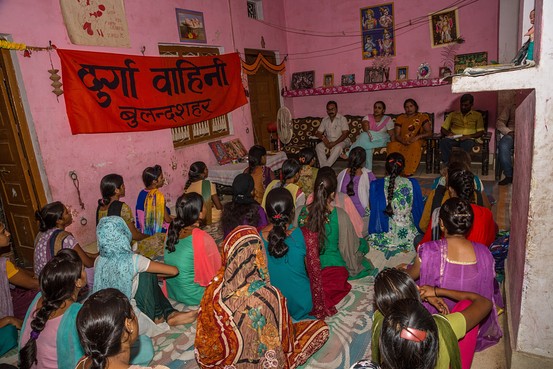 AURANGABAD, India—Conservative Hindu activist Chetna Sharma looked sternly at her audience of more than 40 young Hindu women gathered in the living room of a rural home and issued a warning: Muslim men would try to trick them into marriage and force them to convert to Islam.

Given a chance, Muslim men would force a woman “to have two or three children and then leave her, or rape her, or throw acid on her if she resists, or murder her,” she said. “You can’t even imagine what can happen if you don’t protect yourself from love jihad.”

Right-wing Hindu organizations and politicians have mounted a high-profile drive against “love jihad,” which they paint as a dark, international conspiracy aimed at eroding Hindus’ demographic dominance in India by brainwashing Hindu women. 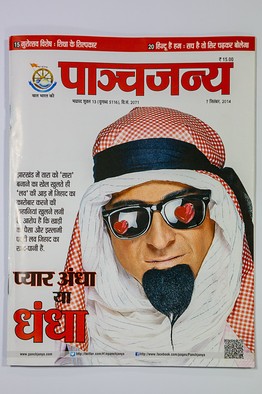 The cover of the latest edition of Panchjanya, a right-wing magazine, asks: Is love blind or a business?Junho Kim for The Wall Street Journal

Authorities say they haven’t found any proof of an Islamist conspiracy to convert or abuse Hindu women. Critics of the Hindu right dismiss the whole thing as nonsense. And Muslim leaders decry it as a campaign of hate.

But activists from a network of Hindu groups with close, if informal, ties to India’s governing Bharatiya Janata Party are traveling from village to village in the country’s most populous state, Uttar Pradesh, spreading the word—with some prominent BJP lawmakers speaking out in support.

The campaign comes amid a broader increase in religiously charged public discourse in India since national elections catapulted Prime Minister Narendra Modi and his BJP to power in May.

Both Mr. Modi and the BJP have deep roots in Hindu nationalism. Since coming to power, the Indian leader’s agenda has focused on economic development. But some BJP figures and leaders of conservative Hindu groups have become increasingly vocal in proclaiming that India is a Hindu nation.

“A majoritarian Hinduism got elected and that is having rather subtle but threatening consequences,” said Shiv Viswanathan, a Jindal Global University sociologist and critic of Mr. Modi’s government.

In the north Indian state Uttar Pradesh, the message being spread by Ms. Sharma and her fellow activists from Durga Vahini, a Hindu women’s organization named after a warrior goddess, isn’t at all subtle. 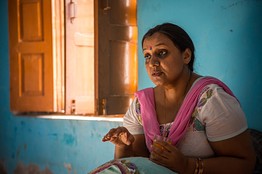 Conservative Hindu activist Chetna Sharma warns Hindu women that Muslim men will try to trick them into marriage and force them to convert to Islam.Junho Kim for The Wall Street Journal

Muslims, Ms. Sharma told the women in Aurangabad, target Hindu women as part of a plot to expand the Muslim population. India is about 81% Hindu and 13% Muslim.

“When one Hindu girl leaves to be with a Muslim, four or five new members will be added to that community” when she has children, Ms. Sharma said. Women are often tortured by Muslim husbands, she added.

To be safe, Ms. Sharma counseled, women should avoid contact with Muslims and tell their families not to befriend Muslim men or allow them into their homes.

Panchjanya, a right-wing magazine which says it is inspired by the Rashtriya Swayamsevak Sangh, India’s most important conservative Hindu group and one with close ties to the BJP, says in the cover story of its latest edition that Muslim men are being trained by militant Islamist groups based in Pakistan and India to convert Hindu women to Islam.

The cover, which depicts a bearded man wearing a traditional Arab scarf and dark glasses emblazoned with red hearts, asks: Is love blind or a business?

Many in the BJP are endorsing the message of Ms. Sharma and other campaigners. Laxmikant Bajpai, the party’s state president in Uttar Pradesh, said love jihad “is a big social problem and we need to tell our women to be alert.”

After pointing to violence in Iraq and elsewhere, BJP lawmaker Yogi Adityanath, the BJP legislator, said in a nationally televised interview that Muslims “can’t do what they want by force in India, so they are using the love jihad method here.”

Opponents of the BJP accuse the party of pursuing a two track strategy, with Mr. Modi and others taking the high road and focusing on the economy and development, while others, like Mr. Adityanath, fan communal flames.

Zafarul Islam Khan, president of the All India Muslim Majlis-e-Mushawarat, an association of Muslim organizations in India, said the campaign was “a weapon for hate-mongering” by Hindu groups who were putting a spin on interreligious marriages to “malign one community.”

“A hate campaign has spread after the elections because these people now have the support of the central government,” Mr. Khan said. “It would stop if Modi sent a strong message to his party and these groups—but he has decided to keep mum.”

Sambit Patra, a spokesman for the BJP, said his party wants to combat fraud or force in marriages regardless of the religions of those involved. BJP leaders in Uttar Pradesh were discussing love jihad in response to “fears that might have crept into the minds of the people,” Mr. Patra said. “If there are suspicions about an issue, in a democracy there is no harm in discussing them.”

Uttar Pradesh is India’s largest state and one of its poorest, where Hindus and a relatively large Muslim minority live side-by-side. In parts of the state, road accidents and other small incidents can quickly spiral into communal clashes.

Charu Gupta, a University of Delhi historian said the current battle against “love jihad” is similar to a Hindu campaign in Uttar Pradesh in the 1920s and early 1930s that accused Muslims of abducting and converting Hindu women.

In more recent decades, about 400 low-caste Hindu families in a village in the southern Indian state of Tamil Nadu raised national anxieties when they converted to Islam en masse in 1981, saying they felt ill-treated by upper-caste Hindus. And over the years, many of India’s most downtrodden have abandoned Hinduism for Christianity over similar complaints of poor treatment, much to the dismay of Hindu nationalist groups.

An echo of that concern can be heard in today’s campaigns.

In Aurangabad, Ms. Sharma asked the women gathered to listen to her whether they ever visited the burial sites of local Muslim saints, known as pirs. Half a dozen sheepishly raised their hands.

Ms. Sharma chided them, asking if the millions of Hindu Gods weren’t enough that they felt the need to worship Muslim saints. She made them promise they wouldn’t go ever again, saying these places were “hot spots” for love jihad.