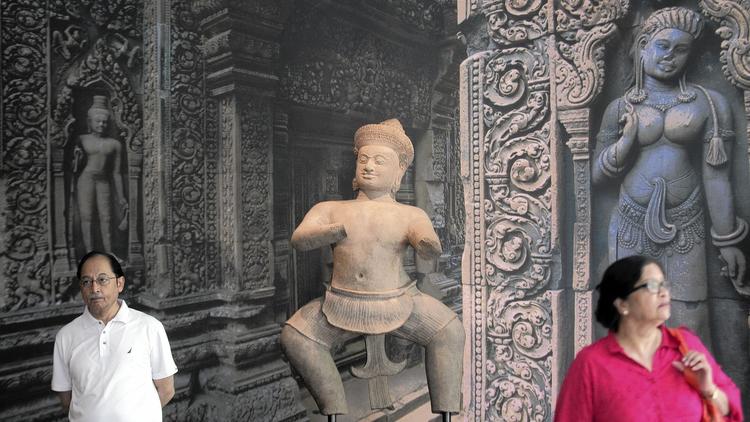 Since 1977, visitors to Pasadena’s Norton Simon Museum have encountered an ancient Cambodian statue that has the wide, hulking build and arrogant attitude of an NFL nose tackle who has just sacked a rival quarterback.

From its pedestal at the end of a long, rectangular downstairs gallery, this life-size presence in sandstone — identified simply as a “Temple Wrestler” created in the early 900s — does not deign to look upon the 10 other figures with whom it shares the room, even though most of them are Hindu deities.

Instead, with a tilted head and a face that seems to wear a sneering laugh, it gazes far above its smaller companions’ heads.

They won’t have to put up with his arrogance much longer. After Thursday, its last day on display, the so-called wrestler, which is missing its hands and feet, is going to be taken down, packed up, and sent home to Cambodia.

The statue, which it turns out is no mere wrestler but one of the leading figures in the ancient Hindu epic the Mahabharata, will soon reside at the National Museum of Cambodia, where it will join four other pieces relinquished by the auction houses Christie’s and Sotheby’s and New York’s Metropolitan Museum of Art.

The five statues are believed to have been grouped together for more than a millennium in an entrance chamber of the Prasat Chen shrine to the god Vishnu at the ancient temple complex of Koh Ker. Then war and political chaos descended on Cambodia in the 1970s, leaving the site an open target for looters.

A re-creation by Eric Bourdonneau, an archaeologist from the French School of Asian Studies in Paris, envisions the key matching figures from the Norton Simon and Sotheby’s squaring off and staring each other down in the moments before beginning single combat. Other figures look on as witnesses to the climactic struggle recounted near the end of the 100,000-verse Mahabharata.

The statues’ return ends a chapter in an ongoing series of controversies over alleged looting that have reduced the antiquities collections of many American museums, notably New York’s Metropolitan and the Getty Villa in L.A.

Helen Ibbitson Jessup, a leading scholar of ancient Cambodian art and architecture who heads the U.S.-based Friends of Khmer Culture, said that a celebration ceremony marking their homecoming is planned early in June in Phnom Penh.

“It’s going to be a major national event,” said Jessup, whose organization works in tandem with institutions in Cambodia.

New facts about the Norton Simon’s prized piece and the nearly identical figure that had landed at Sotheby’s in New York began to emerge publicly about two years ago in court filings surrounding the Sotheby’s statue, which had been consigned for auction by a Belgian collector’s widow.

A bronze sculpture with silver and copper inlay depicts Buddha and his followers on the cosmic mountain, Kashmir, circa 700.

Objections from Cambodia and the United Nations Educational, Social and Cultural Organization had prompted it to be quietly held out of a scheduled auction in 2011, where it had been expected to fetch at least $2 million.

The U.S. attorney’s office in Manhattan sued in 2012 to seize the Sotheby’s piece, triggering a legal battle that ended with a settlement announced this month that calls for the statue’s return to Cambodia without compensation.

Sotheby’s argued in court filings that the Belgian businessman had acquired it legitimately in 1975 and that there were no grounds under Cambodian or U.S. law to force the auction house and its client to give it up.

The Norton Simon took a different approach, based on past cordial relations with Cambodia’s cultural authorities. Without a suit having been filed, museum representatives went to Phnom Penh for discussions earlier this year. Despite what the museum characterized as “a good-faith difference of views” with Cambodia over whether the Norton Simon was legally obliged to send the statue back, its leaders concluded that there were special reasons to send it home.

“While there are extremely strong legal arguments for why we could defeat a claim, and while the Cambodian law is ambiguous at best, in this circumstance it seems appropriate and in keeping with the positive relationship the Norton Simon has had with Cambodia over the years to gift the statue to them,” said Luis Li, an attorney for the museum. “They have a very specific archaeological context they want to create, and I think the Norton Simon was moved by that.”

Norton Simon, who founded the museum in 1974 when he took over the financially depleted Pasadena Art Museum, began collecting Indian and Southeast Asian antiquities on his 1971 honeymoon in India after marrying actress Jennifer Jones, adding them to the brilliant collection of European art he’d already amassed.

In its announcement earlier this month that it would repatriate the statue, the Norton Simon Museum asserted that it had been “properly acquired … from a reputable art dealer in New York in 1976.”

Cambodia is trying to reestablish its cultural heritage following an era of turmoil and horror that lasted from the late 1960s until 1993, when it regained its political autonomy from Vietnam, which had overthrown the genocidal Khmer Rouge in 1979.

Under dictator Pol Pot, the Khmer Rouge caused millions of deaths by murder, disease and starvation, while trying to expunge Cambodia’s past to secure a totalitarian future.

The Norton Simon, which declined to make museum officials available for an interview, said in its written announcement of the statue’s repatriation that it responded to “a unique and compelling request by top officials in Cambodia to help rebuild its `soul’ as a nation.”

Federal prosecutors in the New York case contended that an organized network of looters had stolen the Norton Simon and Sotheby’s statues and a number of companion pieces from a temple at the ancient site of Koh Ker in northern Cambodia in 1972.

The looters were said to have cut off the statues at the ankles to free them from their pedestals, then to have removed their heads for easier transport while smuggling them to Thailand, where they could be sold to antiquities dealers.

The court filings suggested that the Norton Simon’s statue had considerably more stature than a “temple wrestler” or guardian. which it’s said to be in gallery wall text and descriptions from the museum’s online collection catalog.

With artistic hallmarks that include the almost humorous sneer on its face and a mitre-like crown with spiraling bands of ornate carving on its head, it’s now been reclassified as a depiction of Bhima, a heroic but flawed warrior in the Mahabharata whose nearest Western equivalent might be Achilles from ancient Greek myth.

It’s believed to have stood face to face in the temple with the Sotheby’s statue, which represents Bhima’s rival Duryodana.

Cambodia now plans to exhibit its five recovered statues together as they might have appeared together in the Prasat Chen temple, with hopes of regaining four others believed to have completed the scene.

A young girl swings from the word “PARK” within Banksy’s downtown Los Angeles mural. But an additional “ING” has been faded out by Banksy, turning the word “PARKING” into “PARK.” Just down the block from this area, a downtown resident group is looking to find a little more than $6 million to.
“Kissing Coppers,” a life-size black and white portrait of two policemen sharing a kiss, is one of Banksy’s most famous artworks. The piece was created in 2004 on the walls of a pub in Brighton, England. It was then carved from the wall and sold to an anonymous buyer in Miami for $575,000 in.
An 8-foot, 1,500-pound section of cinderblock wall painted by Banksy was removed from an ancient Packard automobile manufacturing plant in Detroit and transported to a police station turned gallery in the same area. The piece’s removal sparked conversations about proper places for street art.
This original painting first sold for $50 at a Manhattan thrift shop that benefits Housing Works, an organization that fights homelessness and AIDS. Banksy added a Nazi soldier to the landscape scene and Housing Works then sold the new work for $615,000 in an online auction.
A visitor to Paris’ Drouot auction house looks at Banksy’s “Very Little Helps” prior to an October auction. The piece sold for about $7,200.

Questions also have been raised about statues from Koh Ker that are now at the Cleveland Art Museum and Denver Art Museum. The Cleveland museum said in a written statement this week that, although the Norton Simon and Sotheby’s statues’ cut-off legs matched the feet looters left behind, its curator of Indian and Southeast Asian art found no fragment in the temple that matched a plastic cast of its statue of the monkey god, Hanuman.

The Denver Art Museum issued a statement saying that “we have had no official claim, nor inquiry of any kind from Cambodia” about its headless torso of the god Rama, one of Vishnu’s alter-egos.

“The moral precedent was set by the Metropolitan Museum” a year ago, Jessup said, when it returned two Cambodian statues based on new evidence that they’d been taken from Koh Ker. After that, she said, “I think it would have been very badly received if [Sotheby’s and the Norton Simon] hadn’t shown equal generosity.”

The Norton Simon Museum will still own 40 ancient Cambodian objects, including a gigantic standing figure of Buddha that serves as a greeter in its lobby, and a lion that crouches on guard near the entrance to the gallery where Bhima will soon no longer preside. It’s uncertain whether a dozen other pieces are from Cambodia or from Thailand.

“We have not been approached by Cambodian or U.S. officials about other works in the collection and have no indication of future requests,” museum spokeswoman Leslie Denk said this week.