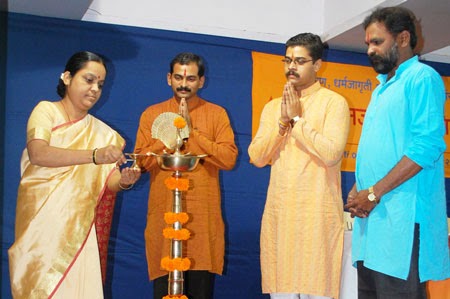 Thane : ‘Congress, which ruled India for 67 years, is now ousted from power. Now, people hope that ‘good days’ would come; but when oppression of Hindus is stopped, only then can we say that good days are here. Till then, we will have to continue our fight,’ stated Shri. Anil More, the President of ‘Hindu Chetana Mandal’ promoted by Bajarang Dal. He was addressing Hindu unification rally held here.

Such rallies were organized at Thane and Kalyan. Hindu unification rally held at Thane, jointly by ‘Hindu Chetana Mandal’ and ‘Hindu Janajagruti Samiti (HJS)’, had auspicious presence of Pujya (Kum) Anuradha Wadekar, ‘Prasar-sevika’ of Sanatan Sanstha; who lighted the lamp to begin the program. Shri. Sumit Sagavekar of HJS emphasized that Hindu Rashtra was the only solution to prevent attacks on Hindus. 70 devout Hindus attended the rally at Thane and 60 at Kalyan.

To be aware of attacks on Nation and Dharma, is the need of the hour. Most people have an attitude that they have no duties towards their Nation and Dharma. We need to repay debt of our nation as it is our duty. Not repaying it amounts to sin. Be ready to prevent attacks on nation !

Review meeting will be held on 2nd August at 7.30 p.m. at Mahalakshmi Mandir, Tilak Chowk, Kalyan and at Vitthal Sayanna Datta Mandir, Damani Estate, Thane at 7.00 p.m. for those who want to take part in activities related to protection of nation and Dharma.