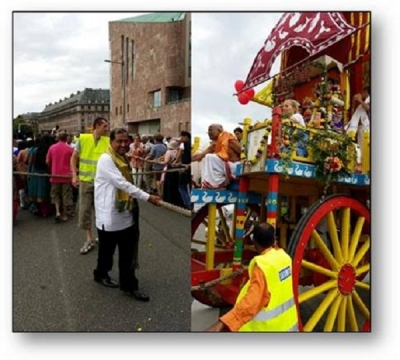 Ratha Yatra is a festival of chariots, a festival of sacred journey.  Every year Lord Jagannath, the Lord of Puri , who is believed to be an avatar of Lord Vishnu, with his elder brother Balabhadra and sister Subhadra, travel on grand chariots, from his temple in Puri, to his garden palace in the countryside. According to scriptures and poets this is a very holy and auspicious festival. Lord Jagannath sets out on his chariot, giving blessings to the people. It is believed that everyone that gets a glimpse of Lord Jagannath on the chariot will be emancipated and relieved from their sufferings.  The sanctity of the festival is such that even a touch of the chariot or even the ropes is considered enough to confer the results of several pious deeds or penance for ages as the Lord destroys in a flash all the sins of his devotees.

I thank Shri Kaushik Gupta and the organizers for initiating this international festival of Rath Yatra in Strasbourg, and wish them strength and courage to continue this tradition at Strasbourg. I am also grateful for inviting me thus providing me the opportunity to receive blessings at this sacred Ratha Yatra.

Historical origin of the custom of placing idols on grand chariots and pulling them is traced by some to a Buddhist origin. Fa Hien, the Chinese historian, who visited India in the 5th century AD, had written about the chariot of Buddha being pulled along public roads. Rath Yatra’s message of reincarnation and emancipation are fundamental to Buddhist beliefs.

Rath Yatra is a festival for all regardless of one’s faith, caste or origin.  This is the only day when devotees who are not allowed in the temple premises, such as non-Hindus and foreigners, can get their glimpse of the deities. It unites people in its festivity as all of the people can equally enjoy the fairs and the joy they bring. Besides Hindus, Buddhists and even Muslims participate in Rath Yatras. Muslim residents of Orissa, regularly take part in the festival, from building the chariots to pulling the rath.

As the Ambassador of Sri Lanka which is a multi ethnic and multi religious society with about 70 percent Buddhists, 12 percent Hindus, 10 percent Muslims and 8 percent Roman Catholics, I am humbled by the multi colour character of Rath Yatra festival, and its sanctity and holiness that unite people of all hues.

India and Sri Lanka are bound by deep cultural bonds that date back several thousand years. Buddhism and Hinduism share many beliefs and values. Buddhists and Hindus are much more alike in thoughts and acts than different. We share the beliefs of compassion, caring and non-violence. Statues of Hindu deities are placed in many Buddhist temples where Buddhist devotees make offerings and prayers to these deities. It is common for Buddhists to visit Hindu Kovils to offer prayers to Hindu deities.

As Buddha, Mahatma Gandhi and Bhagvad Gita have taught us we must learn not to hate each other but to hate violence itself. Instead of glorifying wars fought for personal aggrandisement or self-gratitude which brings destruction, punishment, isolation, frustration, anger and hate I hope that we learn to glorify togetherness, bonding and integration. Having participated in this pious festival, I hope that the blessings of Lord Jagannath we receive today will help us carry home this message of unity, compassion and peace that is ingrained in our cultures.