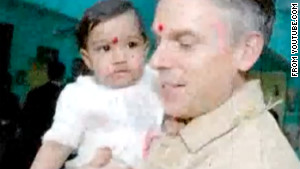 The vdeo shows Jon Huntsman with Asha Bharati, wearing the red tikka, a mark associated with the sacred in Hinduism.

Republican presidential hopeful Jon Huntsman called it stupid. His rival Ron Paul denounced it. But perhaps most appalled by a “China Jon” ad on YouTube were Hindus in America.

So why is that so offensive to Hindus?

The ad also shows images of Huntsman with his two adopted daughters — one from China and the other, India.

The Huntsmans adopted Indian daughter Asha Bharati from the western state of Gujarat in 2006.

The ad asks: “Share our values? A man of faith?” as a photograph flashes of Huntsman with an infant Asha Bharati. Both are a wearing a red tikka, a mark associated with the sacred and often seen on foreheads at Hindu ceremonies and temples.

The Hindu American Foundation objected to the insinuations made in the video.

“Instead of vilifying Governor Huntsman, he should be applauded for being open-minded enough to raise his adopted daughter as a Hindu,” she said.

Huntsman, a Mormon, is raising Asha “to learn about and appreciate her native culture and the faiths associated with it,” his spokesman told CNN last summer.

The advertisement was posted on YouTube earlier this week. An e-mail attempt to reach NHLiberty4Paul was not immediately successful.

A description accompanying the video states that “Ron Paul is the only authentic conservative in this race, and the only one capable of bringing authentic change to Washington. He is the only sole alternative to flip-floppers responsible for the costly mistakes of the past.”

At a campaign stop Friday in Concord, New Hampshire, Huntsman told reporters that Paul should disavow the ad.

“If the group is in any way affiliated with his organization, of course he should,” Huntsman said.

He described how his Chinese daughter Gracie Mei was found abandoned in a vegetable market and taken to an orphanage as a newborn.

Now 12, Gracie Mei is a fixture on the Huntsman campaign. The GOP contender often endearingly refers to her as his top foreign policy adviser.

In all, the Huntsmans have seven children.

“To attack a candidate’s family, particularly his young daughters, is completely unacceptable and should be denounced by all Americans,” said Samir Kalra, director of the Hindu Foundation.

Paul, meanwhile, told CNN that he disavowed the ad and had no control of his supporters’ actions.

“Of course I denounce it … but people do that, and they do it in all campaigns,” Paul said.