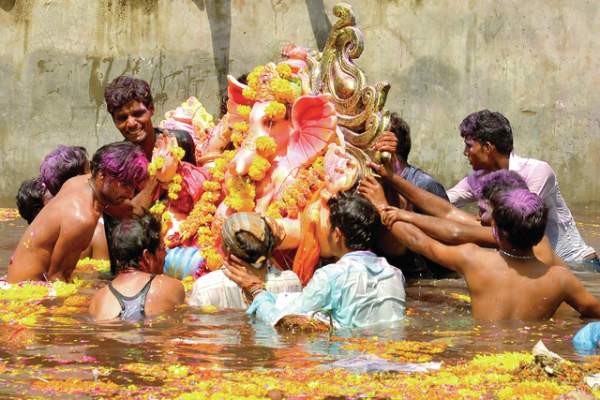 All of these items have, in recent years, gone on sale adorned with images of Hindu deities, particularly that of Ganesha, known most commonly in the West for his elephant face.

“It is inappropriate, and it is offensive to devotees,” said Rajan Zed, a Reno-based Hindu activist who protests against such commercial products.

“I haven’t seen Christ on toilet seat covers. Or any symbol of Islam,” said Vasudha Narayanan, a professor of religion at the University of Florida. “If you wouldn’t do it with one, why do you want to do it with something else? Or at least wouldn’t it behoove you to check?”

Every few months, Zed said, he receives a message about some insensitive commercial use of a Hindu image.

Most recently, Zed called on Amazon to pull deity-decorated skateboards and bedding from its online shelves. (This was not the first time the retailer got itself into hot water over such practices. In June, the hashtag #boycottAmazon trended on Twitter in India after users discovered doormats with images of Hindu deities available for sale. Amazon removed the items within days.)

Earlier this month, Zed asked online retailers Wayfair and Kess In House to stop selling bathmats, doormats, dog beds, leggings and rugs with images of Ganesha, who often is invoked in prayers for prosperity and success at the beginning of new ventures.

Another time, there was the Burger King commercial in Spain that featured Lakshmi, the goddess of wealth, sitting atop a hamburger with the caption, “The snack is sacred” in Spanish. (Many Hindus are vegetarian, with beef considered especially off-limits because cows are considered sacred.)

The use of these images in a secular context, and particularly in a context that is in direct opposition to the basic tenets of the Hindu religion, displays a lack of respect, Narayanan said.

In Hinduism, myriad deities and their representation through images, sounds (like the chanting of “om”) and expressive forms like dance or music are an attempt to capture the many facets of a supreme being whose existence is difficult to grasp, Narayanan said. As such, “depictions of the sacred are themselves considered to be sacred,” she said.

Consider that time in 2013 when Urban Outfitters drew criticism for selling socks with depictions of Ganesha around the ankles.

Feet are considered the lowest form of a being, Narayanan said. Pointing one’s feet at another person is considered to be extremely disrespectful, while bowing at someone’s feet is a mark of veneration.

“When you have your foot not just pointing to but touching a god on footwear, it’s a double-whammy,” Narayanan said. “Even the most liberal Hindus that I know … would find [this] particularly jarring.”

It’s not that Hindus categorically reject the use of religious images on artistic or commercial products.

In India, for example, images of Lakshmi are commonly used to sell lottery tickets. In another well-known advertisement, Hanuman, a monkey-faced deity known in Hindu mythology as an efficient, swift emissary, promises fast delivery for ABT Parcel Service, a transportation and post service in south India.

Most of the time, when Zed reaches out to companies to ask them to stop selling an item or displaying an advertisement, he said, they apologize and comply. “It’s ignorance, basically,” Zed said. “People don’t know our traditions and our deities.”

Indians are a relatively new immigrant group in the U.S., with many having arrived after immigration laws changed in 1965 to abolish national-origins quotas and establish a preference for skilled workers and families. Indians make up only about 1 percent of the U.S. population, and Hindus are a fraction of that, as Indians practice a variety of faiths. There also are Hindu immigrants from other countries, albeit in even smaller numbers.

Knowing someone from a religious group is linked with having more positive views of that group, according to a 2014 Pew Research Center survey. Only 22 percent of respondents in the survey said they knew someone who was Hindu, and when asked to rate their attitudes toward various religious groups on a “feelings thermometer” (where 0 degrees meant viewing a group as coldly and negatively as possible), they rated Hindus somewhat neutrally, at 50 degrees.

By contrast, a majority of Americans said they knew someone who was Catholic or Jewish; those groups received ratings of 63 and 62 degrees, respectively.

Susan Scafidi, a law professor at Fordham University in New York and author of “Who Owns Culture?,” a book about cultural appropriation and American law, said people commonly borrow religious symbols from other cultures because they are the clearest expression of those cultures.

“People reach for things that are accessible … and don’t stop to think necessarily what those pieces of culture might mean,” Scafidi said. Instead, they infuse the symbol with their own, “usually inchoate,” meaning, she said.

“It doesn’t typically come from a place of racism or hatred. It’s more thoughtlessness,” Scafidi added.