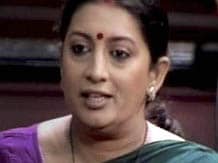 She did so to take part in a function, organised by Vijnana Bharati, a ‘Sangh Parivar; organisation. The function was chaired by the country’s former president, A P J Abdul Kalam.

According to the organisers, Kalam and Irani first paid floral tributes to RSS founder Keshav Baliram Hedgewar at his samadhi. After the function, Irani met some RSS leaders, including Manmohan Vaidya, head of the publicity division, and discussed political developments, sources said.

Irani’s visit comes in the backdrop of reports that a section of the ‘Sangh Parivar’ had reservations about her appointment as HRD minister, a key portfolio in the Sangh scheme of things. In a recent interview to Business Standard, Dinanath Batra, president of the Siksha Sanskriti Utthan Nyas, when asked about the performance of the HRD ministry, had said: “She (Irani) has not spoken her heart so far. They are settling.”

Irani called upon Vijnana Bharati to take a lead role in science and technology and innovation projects involving educational institutions across the country.

A Jayakumar, secretary-general, Vijnana Bharati, said the choice of the venue (RSS headquarters) was a coincidence and there was no political meaning attached to it.

“The programme was part of Vijnana Bharati’s initiative to aggressively and consistently promote science, technology and education among the youth, especially students, to realise the objective of a glorious Bharat,” he added.