There are many good things heard about Prime Minister Narendra Modi’s visit to Japan. One of them was Japanese saying his visit will further strengthen spiritual links and connections between Japan and India.
Due to wretched secularism that was in practice all these years though India became free in 1947 and many neighboring countries  in SE asia as well as  Japan eagerly looked forward at the moment that India who was their spiritual guide for centuries,  will once again restore her much damaged  during  last 1000 years Hindu culture and civilization, and strengthen the ancient cultural links, it did not happen.  Instead every thing second hand was borrowed  from west and their discarded rubbish, socialism along with secularism became supreme, further continuing the damage, Islamic invaders and British usurpers left behind.
Both Japan and India are ancient nations and ancient cultures. Like in India where 80% are Hindu, 80% of Japanese belong to Shinto religion. Again like Hindu religion, Shinto religion is not organized around a single prophet and single holy book nor does it demand that its followers go around the world , convert unbelievers. Spiritual outlook of Shinto and Hindu also remain same. We both worship multitude of gods and idols, but also see divine spirit permeating all , like one energy being  used for different purposes. Like us, Shintos go to different gods to get different purposes accomplished. We go to worship of Laxmi for wealth, Sarawathi for education and so on, so it is with Shinto.
Before Buddhism went to Japan, Hinduism  was there. Hindu and Buddhism exist in symbiosis so do Shinto and Buddhism.In fact throughout SE Asia  Buddha is worshiped along with Hindu deities like Ganesha, Saraswathi et al. So it was the case in Central Asia also before they became Islamic States.
The word Shinto came from earlier Shindo. Sindhu gave raise to word Hindu, and same Sindhu as it went through China became Shindo and reached Japan as Shinto.
More than in name, Hindu and Shinto world view and spiritual outlook also converge. Consider following brief description of Shinto,
Shinto (“the way of the Kami”) is the name of the formal state religion of Japan that was first used in the 6th century C.E., although the roots of the religion go back to at least the 6th century B.C.E. Shinto has no founder, no official sacred texts, and no formalized system of doctrine. Shinto has been formative in developing uniquely Japanese attitudes and sensitivities, creating a distinct Japanese consciousness. Belief in kami—sacred or divine beings, although also understood to be spiritual essences—is one of the foundations of Shinto. Shinto understands that the kami not only exist as spiritual beings, but also in nature; they are within mountains, trees, rivers, and even geographical regions. In this sense, the kami are not like the all-powerful divine beings found in Western religion, but the abstract creative forces in nature. Related to the kami is the understanding that the Shinto followers are supposed to live in harmony and peaceful coexistence with both nature and other human beings. This has enabled Shinto to exist in harmony with other religious traditions. As the foundation for Japanese culture, Shinto has also played a significant role in the political realm. For centuries, Shinto religious festivals and ceremonies have become indistinguishable from the affairs of the government.Read more: http://www.patheos.com/Library/Shinto.html#ixzz3Bx15hv5g
Again like us, Japanese Shinto does not view divine as some sort of aloof being sitting in heavens sending down fire and brim stones on kufrs and heathens. Instead they also see same divine spirit as it is with in, also in trees, rocks and rivers and mountains and so on.
Many of our deities also got a place of worship by Japan’s oldest religion, Shinto. 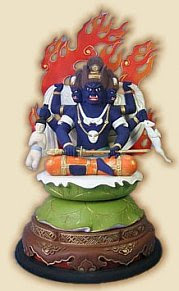 The Japanese adopted many
Hindu deities into the Japanese
Buddhist pantheon. In fact, nearly all Buddhist deities have a Hindu
counterpart. For a listing of 80+ Hindu deities & their Japanese equivelents,
see the TENBU (Skt. = Deva) page.
ABOVE: Japanese statue of
Sanmen Daikokuten in the guise of
Daijizaiten. Photo from Butuzou.co.jpSix Paths
of Karmic Rebirth
Jp. = Rokudō 六道 or
Rokudō-rinne 六道輪廻
Buddhist concept stemming
from Hindu’s karmic philosophies.
In Japan, most commonly
referred to as the Six Paths. 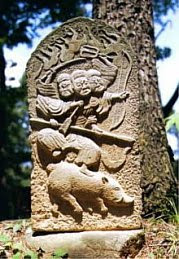 Another Hindu deity adopted into
the Japanese Buddhist pantheon.
Marishiten (goddess of warriors)
at Daiunji Temple 大雲寺
near Kyoto, Photo this J-site

As you can see above, Goddesss Durga or Shakti also known as Mahishasura Mardhini became Marishten, goddess of warriors in Kyoto , Japan.
Modi worships Amba, mother, as Goddess Durga is also known. Hope he gets to visit her in the form of Marishten in Kyoto Japan.
And if she is located in a Shinto Shrine, he has to go alone without Japanese PM accompanying him.
in 2002 President George Bush went to a Shinto shrine and followed all the traditions including bowing before entering , and paying respects to worshipful image inside. All that time Japanese PM was sitting in the car , waiting. He is not allowed into Shinto Shrine  by Japanese constitution drafted by US after II war.
Tojo temple in Kyoto , Modi went is a Buddhist shrine and Japanese PM accompanied him .
Later both held cordial and warm talks on subjects ranging from Bullet trains to Nuclear energy.
Here is Times of India report, please also note ancient connections between the two ancient nations figured in the talks and speeches, thanks to our Narendra Modi.
Source: Via WHN Publisher