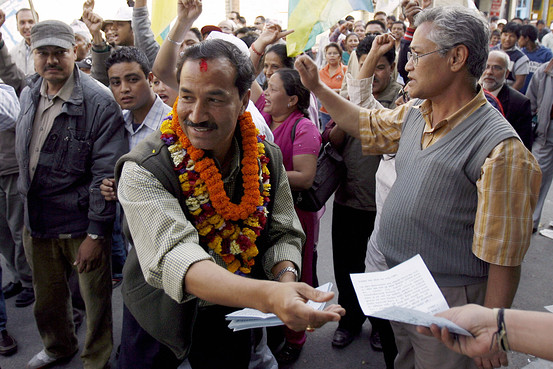 Kamal Thapa, the chairman of the Rastriya Prajatantra Party-Nepal, at an election rally in Katmandu. April 3, 2008.

When Nepal, a Hindu kingdom for two and a half centuries, abolished its monarchy five years ago, the country’s royalists appeared on the brink of political extinction. But as the Himalayan nation heads to elections on Tuesday, a royalist party has galvanized support around a different agenda: Hinduism.

The Rastriya Prajatantra Party-Nepal, which continues to push for a return to constitutional monarchy, has focused its campaign on making Nepal a Hindu state once again, after being declared a secular republic in 2008. Its leader Kamal Thapa has toured the country extensively in recent months, seeking votes under the party’s symbol — a cow, considered holy in Hinduism.

Nepalis will vote on Tuesday for a second constituent assembly, which will also function as a parliament, after the first one failed to agree on key provisions for a new constitution. While federalism and economic development are the dominant election issues, Mr. Thapa and his royalist party are hoping to remain relevant by stirring up religious sentiments in this Hindu-majority nation.

According to official figures, over 81% of Nepal’s 27 million people are Hindus, followed by 9% Buddhists, 4.4% Muslims and 1.4% Christians. The country is also home to a number of ethnic groups that practice their own indigenous religions.

For 240 years, Nepal was a Hindu kingdom, ruled by monarchs of the Shah dynasty. The rulers were revered as incarnations of Lord Vishnu and performed public rituals during big Hindu festivals.

In 2006, a popular uprising for democracy ousted the king, and former Maoist rebels who had fought a 10-year civil war were brought into the political mainstream through a peace agreement. As part of that deal, Nepal was declared a secular state.

“In Nepal, monarchy and Hinduism are two sides of the same coin,” said Hari Sharma, a Katmandu-based political analyst. “After monarchy was abolished, the rationale for Hinduism as the state religion no longer existed.”

Proponents of secularism pointed to Nepal’s large, Hindu-majority neighbor, India, a secular state where all religions are equal under the constitution. Religion and minority rights, however, remain a major theme of electoral politics in India, where the secular-leaning Congress party is pitted against the Hindu nationalist Bharatiya Janata Party. The BJP’s prime ministerial candidate for elections next year, Narendra Modi, is widely considered a Hindu hardline leader.

Mr. Thapa warns against “making the same mistake India made.” He argues that Nepal’s national identity stems from Hinduism, and accuses the country’s main political parties of imposing secularism against the wishes of the Hindu majority.

“It should be institutionalized in the constitution that Nepal is a Hindu state,” Mr. Thapa said. “That doesn’t mean Nepal becomes a theocratic state. It will just recognize the cultural reality of Nepal.”

Analysts say Mr. Thapa is looking to capitalize on the polarized political environment and an explosion of ethnic consciousness in Nepal, where some have proposed the creation of ethnically-based states. This issue raised fears of rifts among Nepalis and prevented parties from finishing the constitution.

“Politics is polarizing along ethnic and regional lines, so some leaders think the Hindu space can be utilized to counter these issues,” said Chaitanya Mishra, a professor of sociology at Nepal’s Tribhuvan University. “They think they can bring people together by talking about Hinduism.”

Mr. Thapa’s party in Nepal is unlikely to emerge among the top three after Tuesday’s polls. Still, it is expected to get far more votes than it did in the previous election in 2008, analysts say. That time round it won only four seats.

Under Nepal’s electoral system, citizens cast one vote for a candidate and a second vote for a party. In several interviews, Nepali Hindus said they would cast their second vote for the cow, Nepal’s national animal and an important symbol in the country’s rituals. Cow slaughter is illegal here.

“Without the Hindu religion, what is the basis for the existence of Nepal?” said Hari Prasad Pandey, 60, standing in the courtyard of the large Pashupatinath temple in Katmandu. “Everything will fall apart.”

Mr. Thapa has bolstered his campaign by claims that the Christian population is growing rapidly and converting Nepali Hindus by offering free education and jobs. Christian groups say conversions are taking place, but deny offering economic or other support as an incentive.

K.B. Rokaya, the general secretary of the National Council for Churches of Nepal, said Christians were now freely propagating their religion, and Hindus were converting because many felt oppressed by Hinduism’s rigid caste system and burdened by its expensive ritualism. Mr. Rokaya strongly opposed Mr. Thapa’s pro-Hindu campaign, calling it “regressive” and “anti-democracy.”

“Many, many lives were lost so Nepal could become a secular and democratic country,” he said. “No one should be allowed to challenge that.”