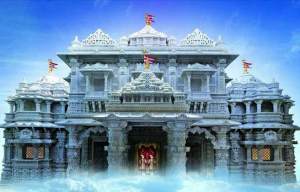 The inauguration of this traditional stone mandir marks the completion of the second phase of the Swaminarayan Akshardham complex that is currently planned for the site. The mandir is 133 feet long and 87 feet wide, comprising of 98 pillars and two domes (ghummats) 30 feet wide and 34 feet high, according to a press release.

The entire mandir has been covered by a permanent structure to increase the structure’s life and accommodate darshan and worship during the region’s harsh winter. The Mandir is made entirely of Italian marble and was completed in three years at a cost of $18 million.

Speaking on the occasion, Hoyer said, “This Mandir will surely not only be a place of worship, but a place of service. The saying, ‘in the joy of others, lies our own’ is translated here from words into action. As followers of this movement have done throughout the world for the benefit of millions and millions of people.” 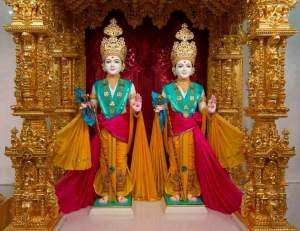 Booker said: “Today is truly a day of celebration. Today is a day that is not just good for this community or the state of New Jersey but indeed what you are doing is great for all of America. I am so impressed. Indeed, I give reverence to an extraordinary structure (the Mandir) which will stand in all of North America as one of the greatest places of faith we have but I am more impressed with the people of this community.”

The inauguration festivities, spanning over two weekends, included a yagna or Vedic ritual for world peace, an evening of cultural programs performed by children, Mahila Sammelan (women’s culture program) and the murti pratishta rituals or ceremonies to invoke the spirit of the deity’s into the murtis or sacred images.

Prior to the consecration ritual that took place on Sunday, after which the murtis were to reside permanently in their shrines, they were taken on a festive procession around the complex. Young and old lined up on the side of the road, some dancing in excitement, some singing, and others watching the murtis and procession. These events infused a sense of jubilance into the devotionally-charged atmosphere. 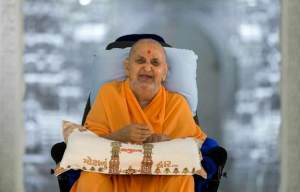 As the culminating event of these celebrations, the Mandir was officially inaugurated in a Vedic ceremony performed by BAPS Swamis in the presence of Pramukh Swami Maharaj. It is the sixth traditional BAPS Mandir of its kind in North America.

Symbolic of the rich traditions it will carry forward, the Mandir is a modern architectural marvel built in accordance with guidelines from ancient Hindu scriptures. Master craftsmen in India first meticulously carved each portion of Italian marble. As the individual portions were completed, they were brought to Robbinsville to be pieced together like a giant puzzle to cover every inch of the structure. The completed masterpiece showcases intricate designs that depict meaningful stories about heroism, sacrifice, and devotion.