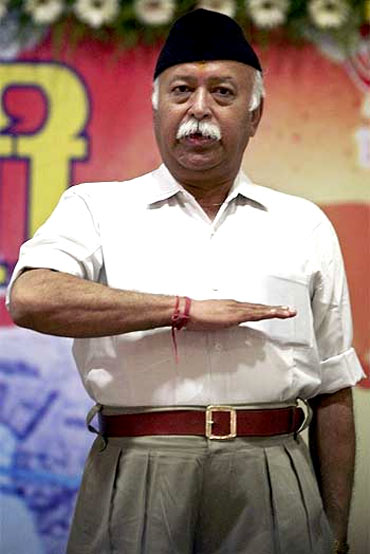 Rashtriya Swayamsevak Sangh chief Mohan Bhagwat has said that India is a “Hindu Rashtra” and there is a need to organise all Hindus in the country for which this is “favourable time”.

Quoting famous poet Rabindranath Tagore, he said whenever there will be conflicts among Hindus and Muslims, “a middle-path will emerge and that path will be of Hindutava.”

“Hindustan is a Hindu Rashtra, which is a fact. We are going ahead with this (idea). All Hindus have to be organised to make this nation great. When our country will become great that will benefit that the entire world,” he said addressing RSS gatherings in Meerut and Ghaziabad on Sunday.

“We have the knowhow for what we want to do. If we continue fighting among ourselves, this Constitution cannot protect us,” Bhagwat said.

Recalling that even in adverse circumstances, RSS founder K B Hedgewar had started branches of RSS to bring together the entire Hindu community, Bhagwat said that this is a “very favourable time” for the Sangh unlike in the past.

“No Swayamsevak Sangh in the world had to face such a long and bitter opposition as we faced in our own country. We had to move forward under very difficult circumstances,” he said.

There was a time when there was no acceptance for the ideology of the Sangh either in the country or in other parts of the world but “this is a very favourable time for the Sangh,” he said.

Noting that the organisation has struggled a lot, Bhagwat said “and the result was that today we have favourable situation but it does not mean that we should become complacent. Rather it is the time we need to work more.”

While asking the gathering to respect diversity, he said that “the idea of Hinduism is the only idea in the world which brings all together.”

He said that the fundamental unity amidst all diversities is the crux of India.