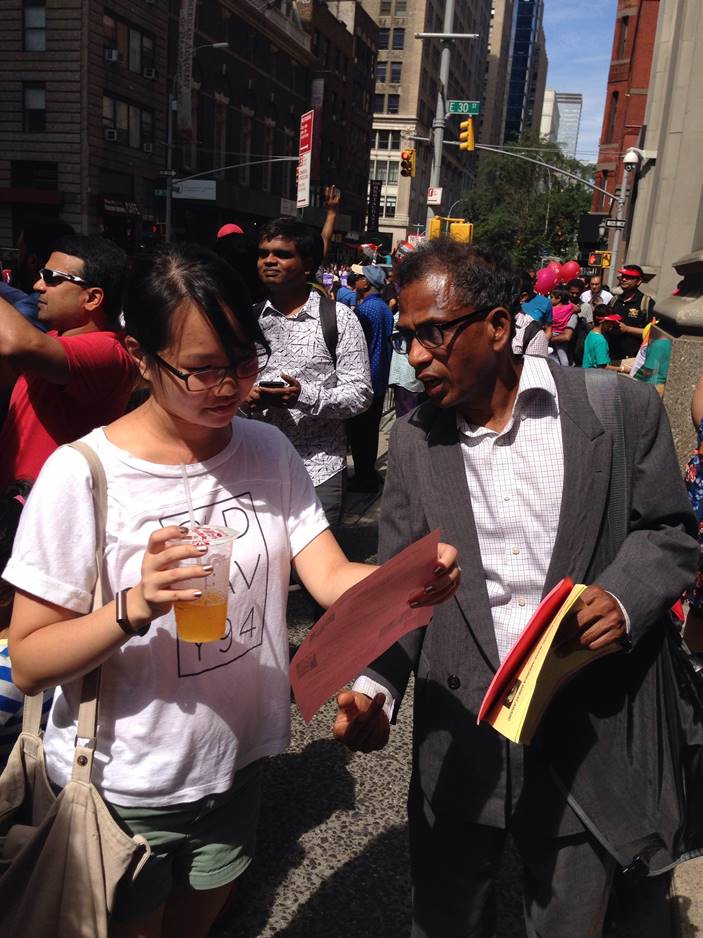 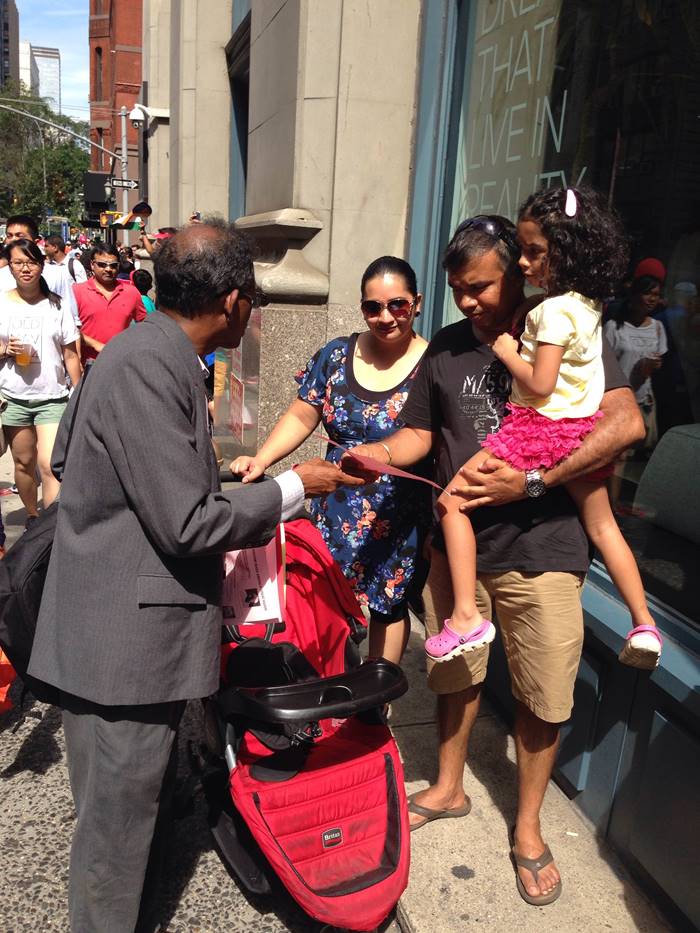 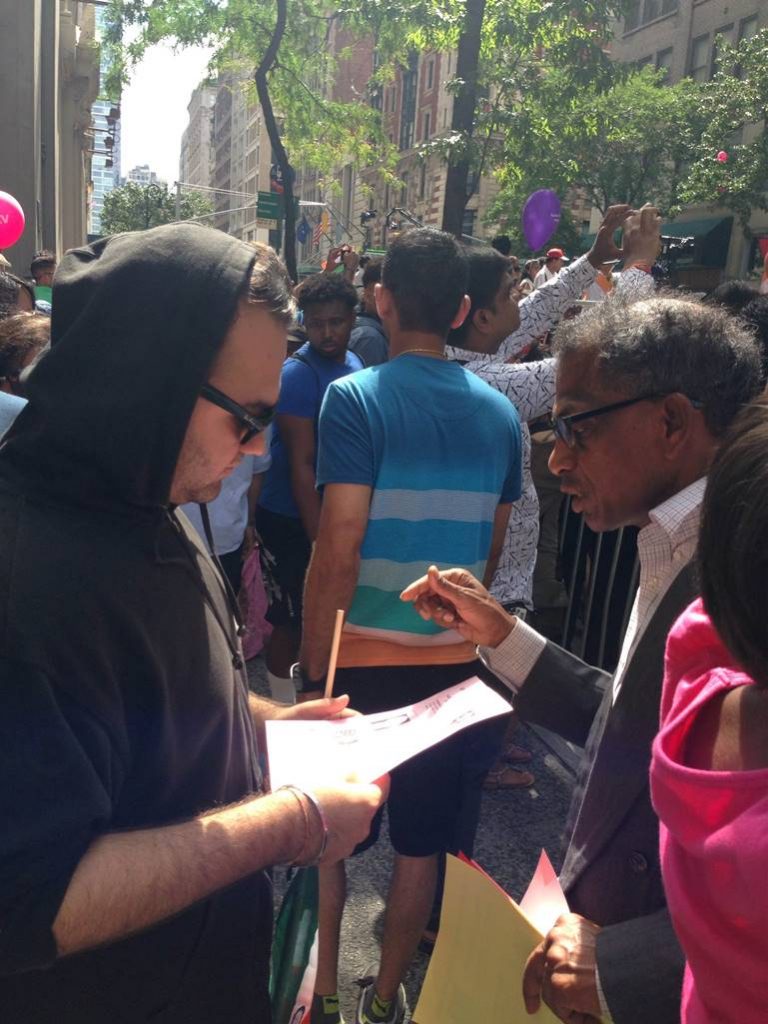 Indian Americans deeply concerned with persistent anti-India record of Clintons during last 25 years have reached out to Indian Americans at New York City parade held on Sunday Aug 21st, 2016 at Manhattan, New York.   They have distributed 800 flyers exposing Clintons record and asked Indian Americans to support Trump.
“Clintons have a very long anti-India record, you name it, they were involved in it”, said Arvind who did painstaking research with detailed links on Clintons 25 year record (also given below).   From NPT sanctions against India, blatantly  pro-Pakistan on Kashmir issue,  putting tariffs on India exports, establishing USCIRF to bully India in the name of Human Rights record, blocking sale of Cray Supercomputers and even sale of Cryogenic engines for space program from Russia to the 7.5 billion aid package to Pakistan under leadership of Robin Raphel with whom State Department has only recently severed connections for being a Pakistan spy, they are virulently anti-India.   Bill insulted India without appointing US Ambassador for nearly an year and Robin Raphel, who was his Secretary of State for South Asia announced arms offer to Pakistan from Indian soil!.  As senator, Hillary voted against India nuclear deal Bush setup and funded NGOs in India to unearth mass graves under, ‘Get Modi’ policy.   When she became Secretary of State one of the first things she said was Pakistan should get same deal, ignoring that Pakistan has been the aggressor and sponsor of Terrorism against India during last 60 years.
As if this is not bad enough, Hillary racism is all there to be seen, when she commented on Mahatma Gandhi,  “He [Mahatma Gandhi] ran a gas station down in St. Louis for a couple of years.  Mr. Gandhi, you still go to that gas station?  A lot of wisdom comes out of that gas station.”.     Readers should also note Bill Clinton’s comments on Obama, “A few years ago, this guy [Barack Obama] would have been getting us coffee”!!
Satya, based in New Jersey distributed the flyers at the Parade and answered questions from several people.   One surprising observation is the people who disclosed that they would vote for Trump but would not like to announce it.    Satya said,   “I have voted for Obama in prior elections and this election is not about Democrat or Republican, but it is about Establishment versus Anti-Establishment.  What is astounding is Indian Americans who are considered the best brain power in America are completely ignorant of the issues that are dear to them in this elections.  They are simply believing what is said by mainstream media whose honesty in covering the candidates in this elections is questionable.”.
It is hope of the community activists involved that Indian Americans will take time to study the issue and then take decision on whom to vote in this elections.  To that effort, they plan to reach out to the community in various forums and educate them about the issue.  In addition, they are also reaching out to other Indian American organizations working for Trump such as education only (non-financial) PAC such as Indian Americans for Trump. 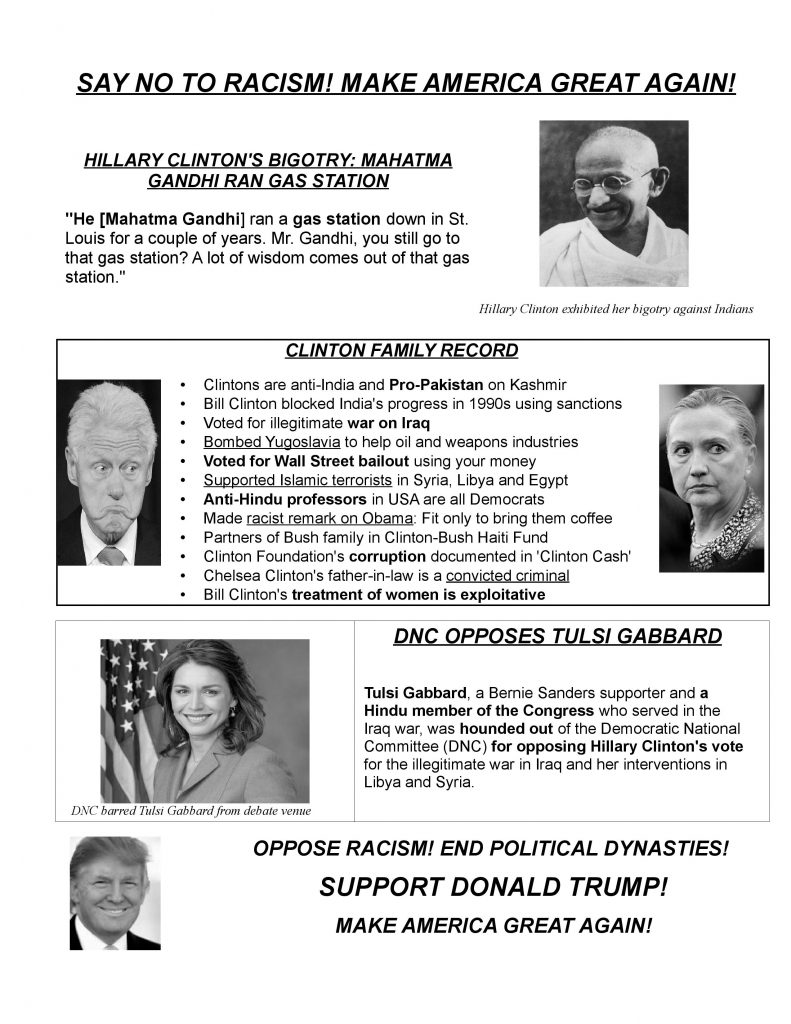 BILL AND HILLARY CLINTON: A QUARTER CENTURY OF HOSTILITY TOWARD INDIA

1991: Arkansas Governor and presidential candidate Bill Clinton delivers foreign policy speech and describes plans to interfere in “separatist efforts” in India and Yugoslavia (search for India in transcript below video)
1992: Arkansas Governor Bill Clinton promises during his presidential campaign that he will use Super 301, a law designed to impose trade sanctions impacting India
1992: US Trade Representative Carla Hills who turns out to be a Hillary Clinton supporter imposes trade sanctions on India under Super 301
1992: Joe Biden Amendment blocks sale of Russian Cryogenic engines to India

1993: Bill Clinton administration to sell Cray Supercomputer to China
1993: Bill Clinton supports terrorists in Punjab leading to protests in India outside US embassy (protests happened in early 1994 but support was in late 1993)
1993: Bill Clinton writes to Pakistan lobbyist and offers to work together on Kashmir
1993-94: Bill Clinton does not bother to appoint ambassador to India for more than a year in order to insult India
1994: Clinton’s close friend and Assistant Secretary of State Robin Raphel says Kashmir should not be part of India

2000: Bill Clinton administration interferes in India and organizes hearing on “human rights violations” based on fabrications about violations of religious freedom
2000: Bill Clinton visits Pakistan on India trip and thus equates India with Pakistan and confers legitimacy on Musharaff who took power in a coup
2001: Hillary Clinton does not oppose Senate vote to remove sanctions on Pakistan
2001: USCIRF, a hate group and creation of Bill Clinton administration, spews vitriol and stereotypes Hindus as “serious violators of religious freedom” and demands that US government ensure that [forced] conversions be permitted in India
2002: USCIRF, a hate group and a creation of Bill Clinton administration, attacks India and Hindus and uses terms like “communal violence” while blaming Hindus; it simultaneously praises Musharaff for curbing “violence in the name of religion” in Pakistan. Note the careful usage of words to describe religious violence in Pakistan.
2003: Democrat Tom Daschle appoints anti-Hindu zealot Preeta Bansal to USCIRF, the hate group created by the Clinton administration, and is cheered by anti-Hindu Christian activists including the violent terrorist Jayachand Pallekonda
2003: Hillary Clinton supporter and India baiter Madeleine Albright, who was Bill Clinton’s Secretary of State, calls for a plebiscite in Kashmir
2004: Hillary Clinton exhibits bigotry and claims Mahatma Gandhi ran a gas station in St. Louis
2005: Hillary Clinton causes outrage by calling for India to give up nuclear program and reconcile itself to non-proliferation treaty
2005: Bill Clinton calls for giving aid money to terror group LTTE
2006: Hillary Clinton who is part of the Senate India Caucus stabs India in the back and votes YEA on ‘killer amendment’ to bill in US Senate that deals with Indo-US Nuclear deal; the amendment is intended to kill the deal and set back Indo-US relations by 30 years
2007: Hillary Clinton booed when she defends Musharaff and attacks Senator Obama for saying he would attack Pakistan and take out Osama bin Laden
2007: Hillary Clinton’s fundraiser is organizer of LTTE Heroes Day which celebrates terrorists
2008: Hillary Clinton once again attacks Senator Obama for promising to act against Pakistan for supporting terrorists
2009: Hillary Clinton says she is proud to release report of anti-Hindu hate group USCIRF which was formed on the advice of a Committee consisting of Christians, Muslims and others but not Hindus (Click here to read about Hindus alone being excluded by Bill Clinton when the Office of Religious Freedom was created)
2009: Hillary Clinton backs talks with Taliban
2009-2012: Hillary Clinton carries on a get-Modi campaign against Narendra Modi
2012: Hillary Clinton declares ‘religious freedom,’ a euphemism for Christian proselytism (primarily in the Indian subcontinent), a foreign policy imperative
2013: Clinton Global Initiative partners with anti-Hindu evangelical Christian group World Vision
2014: Bill Clinton friend and former Assistant Secretary of State Robin Raphel investigated by FBI for spying for Pakistan
2015: Huma Abedin, a key member of Hillary Clinton’s 2016 presidential campaign is the daughter of a Pakistani mother and her father worked for an Islamist in Saudi Arabia with ties to Al Qaeda
2015: Hillary Clinton’s running mate, Christian missionary and India-baiter Tim Kaine admits Pakistan has connections to terror group LeT but praises Pakistan for fighting terrorists and advises India to have a better relationship with Pakistan
2016: Clinton Foundation donor linked to Pakistani arrested for corruption and harboring terrorists