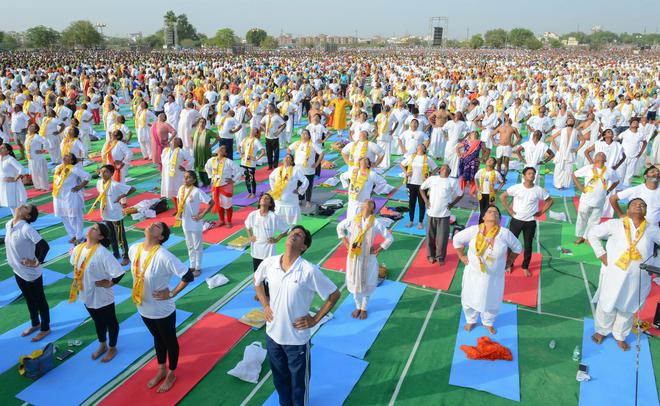 Enthusiasts perform yoga during an event to set the Guinness World Record for the largest yoga lesson during the International Day of Yoga at Kota in Rajasthan on June 21, 2018.   | Photo Credit: PTI

Narendra Modi says way to lead a contented life is yoga; Pinarayi Vijayan sees bid by some groups to ‘hijack’ yoga in the name of religion.

June 21 is being observed as International Yoga Day every year, after the United Nations accepted India’s proposal in 2014.

This year, the national event was held at Dehradun’s Forest Research Institute with the participation of Prime Minister Narendra Modi.

Mr. Modi highlighted the importance of yoga, a gift from India to the world. ”Yoga has the perfect solution to the problems we face, either as individuals or in society. Yoga is beautiful because it is ancient yet modern,” he said.

Events were organised across the country, including Rajpath, where as many as 15,000 people took part in a mass yoga session headed by Union Minister Harsh Vardhan.

Here are the live updates:

Over a lakh join in yoga session in Kota

Rajasthan created a world record bringing over a lakh of people together at a yoga session to mark the International Day of Yoga.

Two representatives from Guinness World Records, watched as yoga guru Ramdev put the gathering, which included Rajasthan Chief Minister Vasundhara Raje, through a series of ‘asanas’. The organisation then handed over a certificate to Ms. Raje and Mr. Ramdev, saying it had been the largest gathering worldwide of people performing yoga.

The largest yoga lesson was achieved by the Government of Rajasthan, Patanjali Yogpeeth and District Administration at Kota, Rajasthan, India, on 21 June 2018, it said. Cameras set up at the site and on drones determined that 1.05 lakh people performed the ‘asanas’, beating the previous record of 55, 524 people in Mysuru in 2017.

The yoga camp started at 5 a.m. and the 15 exercises that were part of the protocol for setting a record were performed from 6.30 a.m. to 7 a.m.

Ms. Raje announced plans to set up a yoga centre with an ‘acharya’ to coach people at each district headquarters.

Both the JD(U) and the BJP, however, tried to downplay the issue.

The JD(U) said Mr. Kumar had been practising yoga daily, even before June 21 was declared as the International Day of Yoga by the United Nations in 2015, adding that “it would be wrong to attach any political meaning to personal decisions.“

When questioned about Mr. Kumar’s absence at the event, both Mr. Prasad and Mr. Sushil Kumar Modi insisted that the presence or absence of a public figure at an event must not be politicised.

Thousands of people took part in the event held at the Patliputra Sports Complex in Patna.

The Chief Minister, who is said to have learnt yoga from the masters at the renowned Bihar School of Yoga at Munger, has been critical of the mass scale calisthenics organised on this date.

Speculation was rife that Mr. Kumar might take part in the celebrations this year, following his return in August 2017 to the BJP-led NDA, which he had left in 2013.

Yoga could be practised by all, irrespective of caste and religion: Pinarayi Vijayan

Kerala Chief Minister Pinarayi Vijayan lauded the greatness and benefits of yoga but said it should not be seen as part of any religious practice. Participating in a State-level International Yoga Day celebrations in Thiruvananthapuram, Mr. Vijayan said the LDF government had taken steps to set up a yoga and naturopathy centre of international standards in the State.

Yoga could be practised by all, irrespective of caste and religion, Mr. Vijayan said, adding it should be done with a ‘free and secular’ mind.

Yoga was an exercise and not part of any ritual, he said attempts were being made by some groups to “hijack” it in the name of religion. “This kind of false propaganda will only keep common people away from yoga and reduce its popularity.”

Terming yoga a ‘good exercise’ for the body and mind, the Chief Minister said, “though there may be many other forms of exercises in the world, there is nothing as good as yoga especially for the mental health and well-being.” 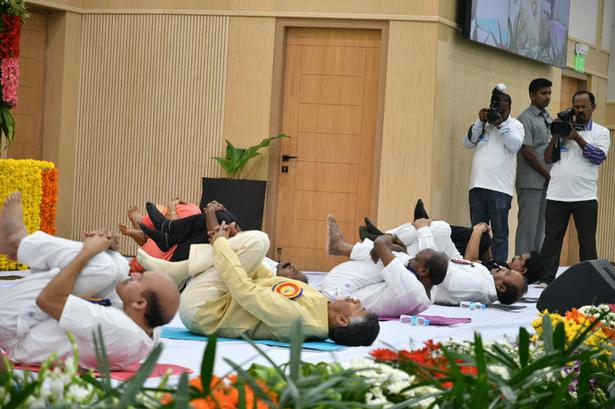 “Yoga is a great tool to keep the mind under control. Five minutes of yoga will relieve one of any kind of stress,” he said at a function in Amravati to mark International Yoga Day.

The Chief Minister, who is a regular practitioner of yoga, performed various ‘asanas’ along with some college students on the occasion.

Yoga in school curriculum can help in creating a healthy nation: Venkaiah Naidu

Participating in an International Yoga Day event at the Bandra Reclamation Sealink Promenade in Mumbai, he said the ancient Indian discipline was an invaluable gift to the world from India.

“The practice of yoga is important for positive thoughts. If it is included in the school curriculum it is possible to create a healthy nation. Yoga also helps in relief from stress due to the changing lifestyles,” Mr. Naidu said.

In an impressive display of yoga, Indian Air Force personnel performed asanas in the sky at a height of about 15,000 feet. 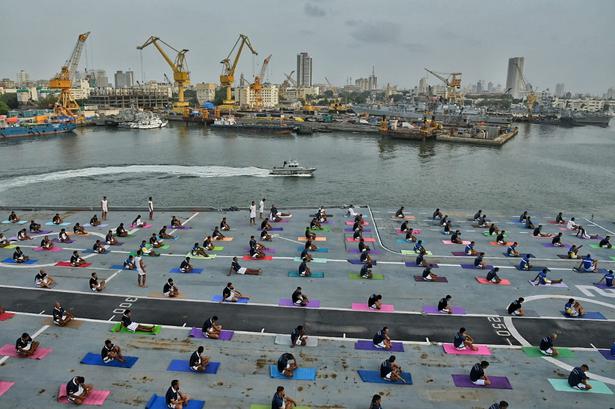 Western Naval Command personnel getting ready for a yoga demonstration on the deck of INS Viraat in Mumbai on International Yoga Day on June 21, 2018.   | Photo Credit: Prashant Nakwe

The daredevils performed asanas like ”Vayu Namaskar” and ”Vayu Padmasana”. 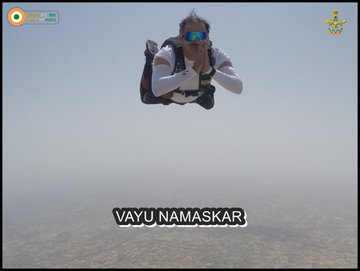 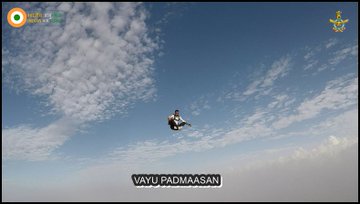 Yoga is the best way to deal with stress, Gujarat Chief Minister Vijay Rupani said. He expressed happiness that over 75 lakh people across the State joined him in the International Yoga Day celebrations.

Around 750 differently-abled people also joined Mr. Rupani in doing exercises based on the ancient Indian discipline in Ahmedabad, while women and students performed ‘aqua yoga’ in some other parts of the State.

Mr. Rupani attended a yoga day event at the Sardar Patel Stadium in the morning and performed various ‘asanas’ along with thousands of enthusiasts. 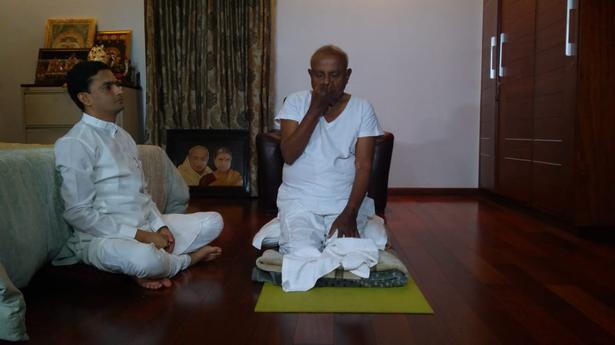 Yoga by the beach 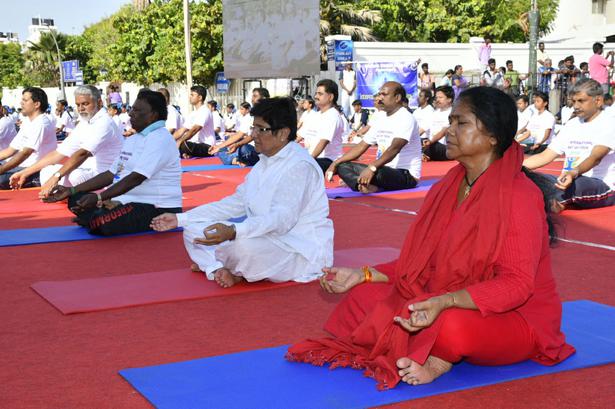 All roads in Mysuru lead to MRC Yoga enthusiasts thronged the Mysuru Race Club (MRC), on the foothills of Chamundi, for an hour-long mass yoga demonstration.

Mysuru entered the Guinness Book of World Records for the largest yoga demonstration or lesson at a single venue during last year’s yoga day at the MRC. 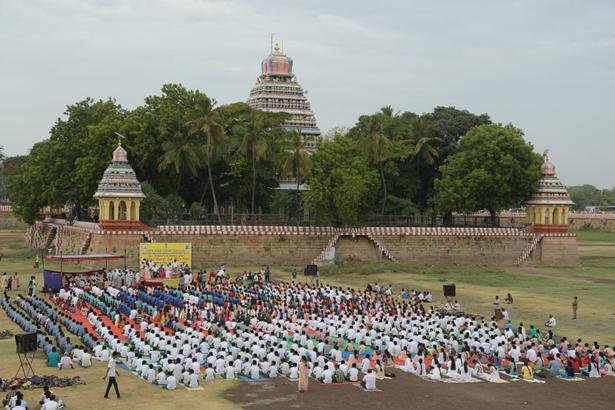 As part of International Yoga Day, Brahma Kumaris organised a mini marathon stressing the need for a healthy and happy life in Erode.

Hundreds of youngsters participated in the run. 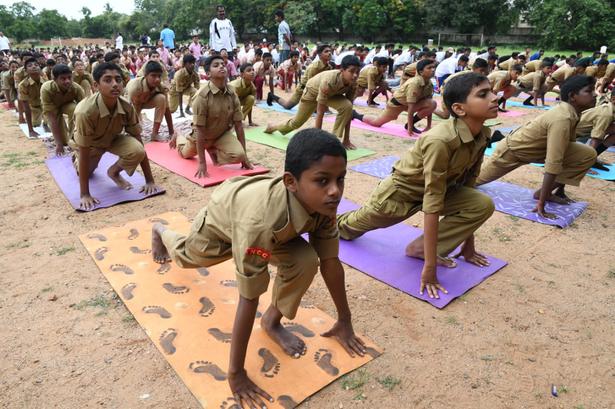 In Coimbatore, mass yoga sessions were held at the Government Arts College grounds. 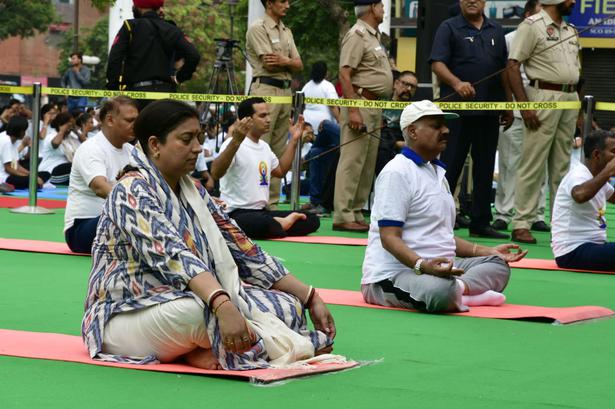 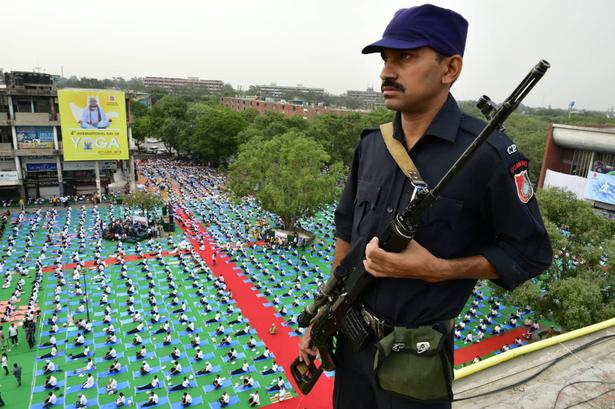 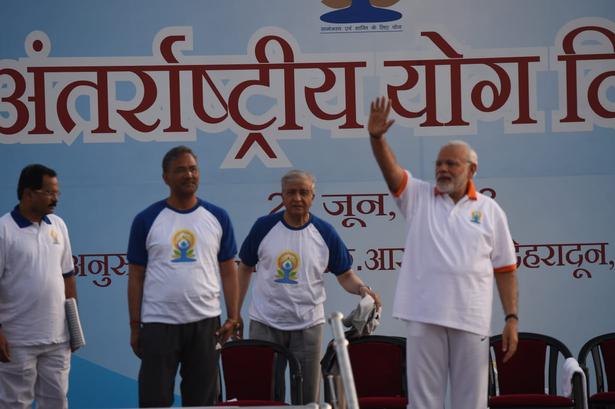 “The world has embraced yoga and glimpses of this can be seen in the manner in which International Day of Yoga has been marked every year. Infact, Yoga Day has become one of the biggest mass movements in the quest for good health and well-being,” Mr. Modi said

“Yoga is beautiful because it is ancient yet modern, it is constant yet evolving. It has the best of our past and presents and a ray of hope for our future. In Yoga, we have the perfect solution to the problems we face, either as individuals or in our society,” he said.

“The way to lead a calm, creative & content life is yoga. It can show the way in defeating tensions and mindless anxiety. Instead of dividing, yoga unites. Instead of further animosity, yoga assimilates. Instead of increasing suffering, yoga heals,” he added. Roughly 15,000 people turned up for the 4th International Day of Yoga event at Rajpath, Delhi.

The session started at 6 a.m. and the hour-long event was preceded by several cultural performances. Union Minister Harsh Vardhan was the chief guest. MP Meenakshi Lekhi also participated in the event.

On Wednesday, a section of the Rajpath, between Rafi Marg and Janpath, was closed for the preparation of the event.