Prime Minister Narendra Modi had on his state visit to the US in August invited Trump’s daughter to India for November’s Global Entrepreneurship summit in Hyderabad. She accepted. 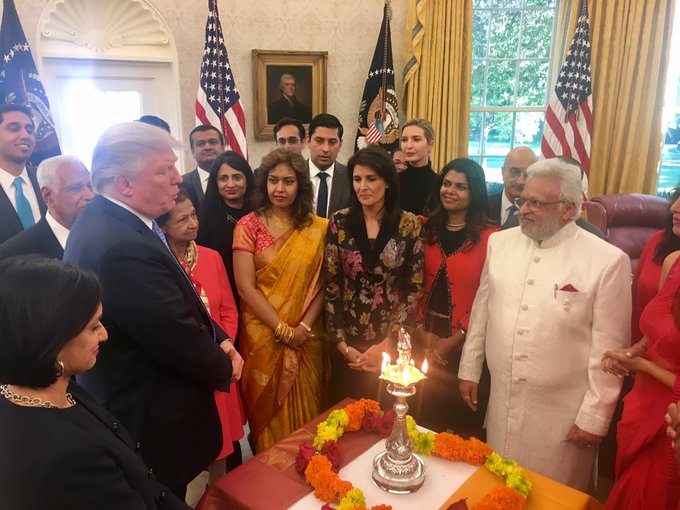 Wishing Hindus, Sikhs & Jains around the world a joyful #Diwali. Saal Mubarak to all! Looking forward to my visit to India for #GES2017.

Two days ago, Ivanka attended Diwali celebrations in the Oval Office with US President Donald Trump. They were joined by senior Indian-American members of Trump’s administration, including Nikki Haley, his Ambassador to the United Nations, and Seema Verma, Administrator, Centers for Medicare and Medicaid Services. Trump said he was deeply honoured to be joined by so many administration officials and leaders of the Indian-American community in celebrating Diwali.

“As we do (celebrate Diwali) so, we especially remember the People of India, the home of the Hindu faith, who have built the world’s largest democracy,” said Trump in a Facebook post along with a video of his Diwali celebrations inside the Oval Office.

The US President also said he greatly valued his “very strong relationship” with PM Modi.
The tradition of Diwali celebration at the White House was first started by former US President George Bush.
In the first year of his presidency, former president Barack Obama lit the ceremonial diya in the East Room of the White House. In his last year in office in 2016, Obama for the first time observed the festival of lights in the Oval Office.
Source: The Times of India