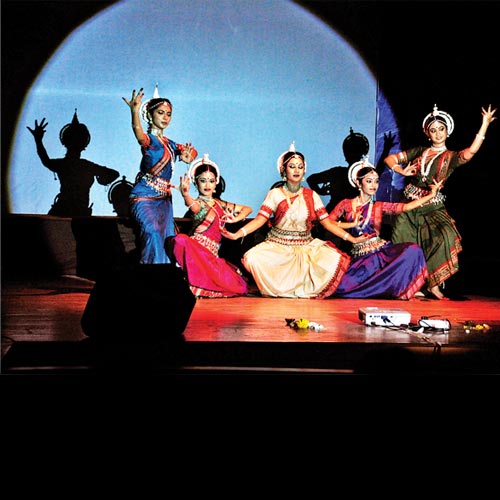 Varadkar and her troupe performing at Prayaag 2013.

Gone are the days when classical dancers did not look beyond mythological literature for reference. In recent times, poems too have been inspiring artists like Odissi danseuse, Shubhada Varadkar, whose performance ‘Journey to Divinity’—staged last week at Ravindra Natya Mandir at Prabhadevi—was a portrayal of Swami Vivekanand’s life, writings and poems.

Besotted with Swami Vivekanand, the monk in saffron with his trademark turban, who has often been credited for raising awareness of Hinduism and yoga, Varadkar, who has been reading his poems since childhood, chose to adapt some of his work. It was no easy feat she admits candidly, “Depicting the meaning of a person’s poems and writings through dance is a challenge.

Having practised Bharatnatyam for years, Varadkar moved to Odissi and eventually completely gave up Bharatanatyam to do justice to one dance form. “I am very spontaneous when I dance, and I often felt that I was mixing both dance forms in my performances. So, I just stuck to Odissi.”

However until recently Varadkar never attempted to adapt Vivekanand’s poems in her dance as she feared that she would upset the sensibilities of his followers. “The challenge is not just adapting the poems; it is about putting it in the right context. But as this year marks Swamiji”s birth anniversary, I decided to take up the mammoth challenge and I am glad that the audience appreciated the performance.”

Varadkar’s piece was choreographed earlier this year for another event; this is her second performance in which she adapted some of Vivekanand’s poems including the famous Nache Uspar Shyam, which was written in Bengali and later translated to Hindi. “This poem is relevant to the present day as it talks of the sorrow and misery caused by man’s attachment to worldly pleasures,” quips the danseuse. With the nation reeling under an economic crisis, rife with corruption and inflation, it is not glib to say that Vivekanand’s Nache Uspar Shyam suddenly feels relevant again; the poem has potential as a commentary on the nation’s situation just like some of Vivekanand’s other poems like Kali: The Mother.

“The million dollar question for me was the choice of mudras to depict the plot. I had to do some research on that, but by and large I have stuck to mudras in the Odissi dance form itself. Nothing is beyond the realm of classical dance. If you try, you can adapt almost anything to a dance performance; it depends on the artists’ sensibilities and interpretation,” she adds.

Creativity and the need to experiment is what Varadkar’s ‘Journey to Divinity’ has inspired. Of course, it was not just the poetic adaptation that drew large crowds to Ravindra Natya Mandir last weekend. There was the detail-rich performance, Varadkar’s interpretation of Vivekanand’s poems and of course her dancing.

Playing to a packed house, Varadkar’s performance was well-received. “Initially, when I approached the Ramakrishna Mission with the idea of adapting Swamiji’s poems into my dance, they were a little wary. I managed to convince them only when I submitted a script,” says Varadkar, who has come a full circle.

After two months of rehearsals and another month of recording the music for her performance, ‘Journey to Divinity’ is a faint hope of salvation for the nation, in Varadkar’s words. “It leaves much room for interpretation and has a moral for people to take home,” she says adding that minutes before the performance she was extremely tense.  “Never before, during my 20-year career have I been as anxious before a performance.”  However, her mission and purpose felt accomplished at the end of her performance, when the president of the Rama Krishna Mission saluted her for her efforts. “That was a rewarding moment; a fulfilling moment indeed!”