I wrote Lajja when I saw Muslim fundamentalists in Bangladesh attack Hindus. It all happened during December 1992. The Hindu fundamentalists of India destroyed the Babri Masjid in Ayodhya. The Muslim fundamentalists of Bangladesh avenged the destruction of the Babri Masjid by attacking the blameless Hindus of Bangladesh, burning their homes, destroying their temples and shrines and raping Hindu women. I had protested this terrible violence in Lajja. The Bangladesh government banned Lajjatwo months after the book was published because it was the government’s responsibility to protect Hindus and it had completely failed to do so. Lajja is still banned in Bangladesh. No one in Bangladesh has the strength to go to court against this ban.

Lajja has been translated into many languages and published in several countries. It is primarily a testament to the savagery of religions in the Indian subcontinent. Religion drives people to madness, at which point they do not hesitate to abandon even basic humanity. Even today, the politics of religion does not allow the subcontinent to become civilized and its people to become truly educated. Lajja can be seen as a symbol of protest. It is a protest against the violence, hatred and killings that are going on all over the world in the name of religion.

Writers work to spread awareness amongst people through their books. People blinded by religion do not read and books are burnt by those who rule. And so, the incidents described in Lajja are repeated over and over again in Bangladesh. Lajja was written twenty-one years ago. Even now, Hindus in Bangladesh are being tortured and many come away to India because they feel insecure. Those without shame do not want to see their societies change.

Lajja will remain relevant as long as the incidents described in it continue to happen and as long as there is conflict between people of one religion and another. Lajja does not speak of religion, it speaks about humanity. Lajja speaks not of hate but love. Lajjaasks for equality, not discrimination. Lajja waits for a time of equality, empathy and freedom.

Translated from the Bengali by Anchita Ghatak. 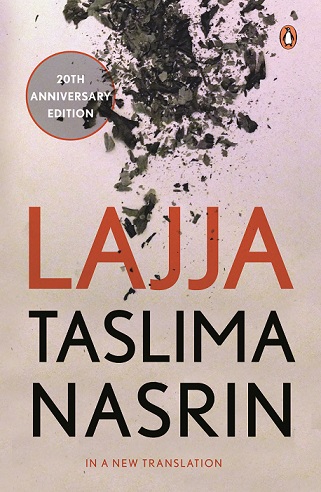