HOUSTON: The most powerful testimonial on the impact of inaccurate portrayal of Hinduism in the text books used in American schools came from a young Indian man who is a product of these very schools. He spoke about the shame he felt in classes in Philadelphia as he heard the unflattering description of Hindus and how the text on Hinduism swiftly moved from 500 BC to Buddhism. 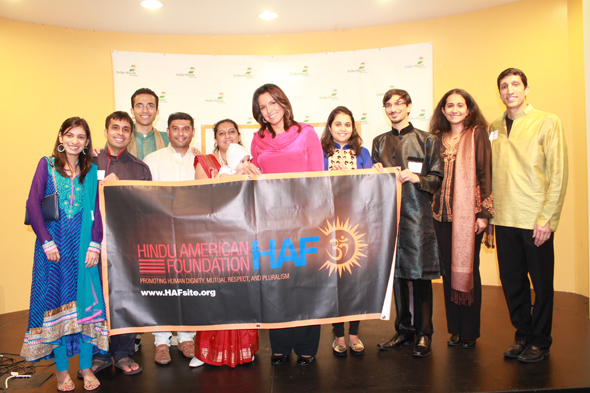 It took the young man, Dr. Murali Balaji, the rest of his education through journalism and the graduate school and growth as an adult to come to terms with this slight. “I have to confess that most of my friends were and continue to be from the mainstream,” he said as he spoke of his evolution to an eager audience, “but when I saw the continued inaccuracies in text books, I decided to act for future generations. I want my kids to be comfortable in their own skin.” 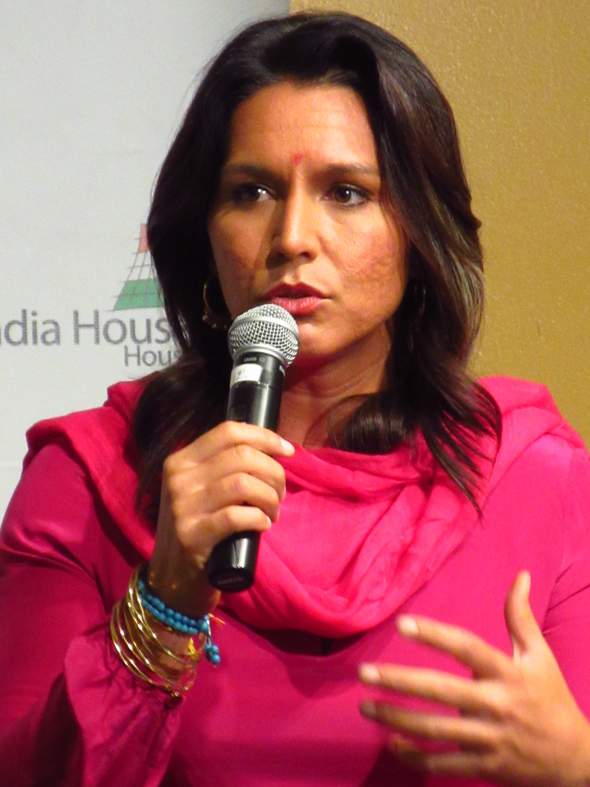 So when he had an opportunity to do something about this, Balaji didn’t bat an eyelid when he was offered a chance to lobby for revisions to the text books as Director of the Education and Curriculum Reform committee of the Hindu American Foundation, headquartered in Washington, D.C. where he has worked for the past year. “I could have gone on to becoming Dean of a college and earned plenty of money,” confided Balaji, “but I decided to go into service for something I believed that would make a difference for all of us Hindus and will have a lasting impact for generations to come.” 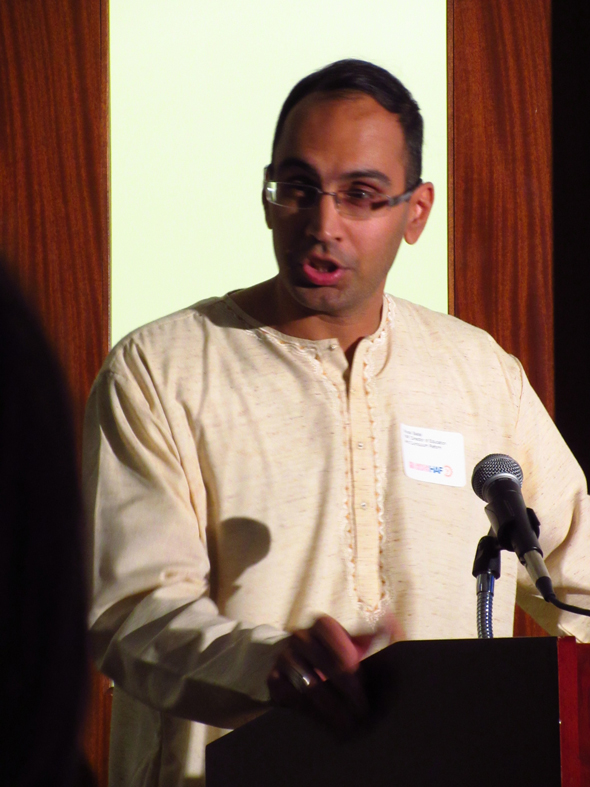 Balaji’s words fell on the very receptive ears of the 260 people who came to the HAF Houston Chapter’s fundraiser on Saturday, November 16 at India House. Among them was the guest of honor, US Congresswoman Tulsi Gabbard (D-Hawaii) who has the distinction of being the only Hindu member of Congress and whose video of taking the oath of office two years ago with her hand of the Bhagavad Gita went viral among Indians and Hindus in particular. Gabbard was on her way back from Hawaii after winning re-election and also serving a short tour of duty in the National Guard to help with the Kilauea volcano lava in her native state. 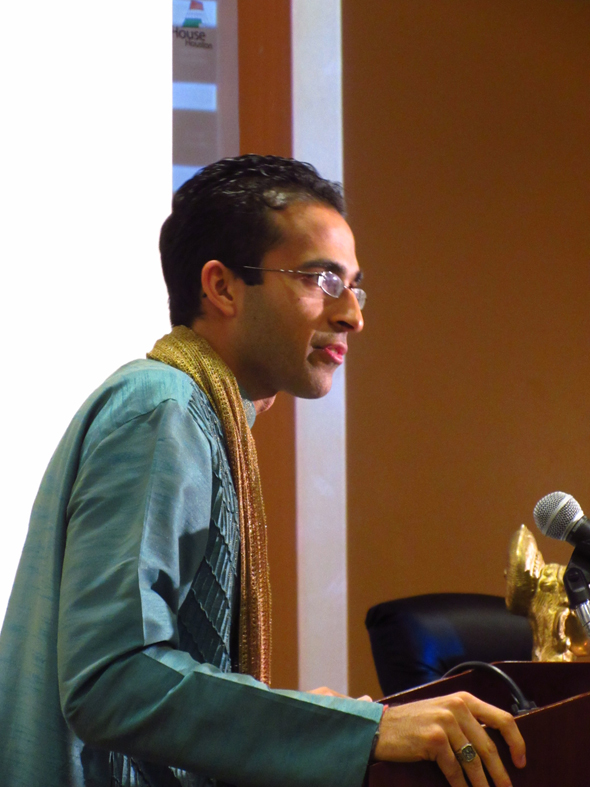 Balaji described how the Texas Board of Education’s review and approval of textbooks carried so much weight these recommendations were adopted by 23 other states. He chose to focus his efforts on Texas and submitted scholarly revisions to factual errors, like a Hindu being shown praying in the Muslim namaz-style. The TBE was won over and the text book revisions that have since being made are “revolutionary”, a tremendous victory for the HAF that “will be transformative and will affect the whole country,” exclaimed Balaji. “This will make sure that the Hindu American story is told in all its diversity.”

Balaji also described the Hinduism 101 curriculum that the HAF has trained 900 teachers across the country, 200 in Texas alone. It has been well received for opening the eyes of teachers, with one in FBISD asking for the materials so that other teachers in the district could be trained every year. Kavita Pallod, daughter of Houstonian Hindus activist Vijay Pallod, has been instrumental in setting up the Hinduism 101 website.

A short video clip featured all the people who work at the HAF in Washington, D.C. as well as its Board of Directors. Apart from explaining all the work the HAF does throughout the year in lobbying members of congress, the influential Religion Newswriters Association and the American Academy of Religion and making sure that Hinduism is kept in the forefront and portrayed correctly; the goal that the highly motivated group of mostly young professionals at the HAF want most to achieve is a more pluralistic society in the US.

Among them is Jay Kansara, the Associate Director for Government Relations whose job in the last two years has been to meet with influential politicians and organization leaders to educate them on matters on grave importance to Hindus, like the desperate plight of Hindus in Bangladesh, and rectify misinformation. His advocacy has brought him in constant touch with several members of Congress, notably Ed Royce (R-CA) and Gabbard whose help has led to reversing language on key issues.

Kansara interviewed Gabbard in a conversational setting onstage. The audience was keen to hear from Gabbard, 33, and her experience as an elected Hindu politician. She explained that neither of her parents are Indian and that she has never been to India, although, at Indian Prime Minister Narender Modi’s invitation during his recent visit, she will visit India in December. She recalled how she has been practicing karma yoga and bhakti yoga since she was a child. She said that she gave the Gita that she read as a child, and has kept all this time, to Modi as a present. She has often turned to the Gita for solace and direction, quoting verse 18:66 when Krishna advises Arjun to ‘abandon all varieties of religion and submit to me; do not fear’.

The two, Kansara and Gabbard, took some questions from the audience as they concluded the dialogue. Rishi Bhutada, an HAF Director and Houston Chair, described the work that HAF has performed and its growth to seven chapters across the US. He appreciated Kansara’s role in getting all the Congressmen onstage with Modi in Madison Square Garden and how HR 417, which denigrated India, was stopped in its tracks.

The fundraiser started in earnest with a challenge to meet several funding levels, equating them with the amount of projects or accomplishments it would generate. Starting with a seed donation, matched by Ramesh Bhutada (Rishi’s father), many people were energized to pledge – and donate on the spot and reached $131,000, which exceeded their goal.

Ramesh Bhutada threw out a challenge for the HAF to set up an office in India to help push its agenda, and pledged the half of the $20,000 he thought it would take to run for a year. Two other donors soon helped to meet that goal, although the HAF Board has only said it will take the proposal into consideration. “Hinduism must be projected in the right way in this country,” Ramesh Bhutada said. “We must all be inspired to do our little bit.”

HAF has also taken on the role of promoting the cause of the Yezidi community, a minority non-Muslim community in northern Iraq whose members have been targeted by the ISIS militants for persecution, with thousands of them being killed or abducted. Hearing of their plight, the HAF connected the President of their Houston organization, Haider Elias, with Pallod so that he could address the meeting. Elias left the next day on a one-week tour of Erbil in Kurd held Iraq, for a meeting with the spiritual leader Sri Sri Ravi Shankar who will be attending a conference there for a week.

The evening ended with dinner which, as well as the appetizers, was catered by Daawat. The emcee starting the program was Neeraj Salhotra and opening invocations were sung in Hindi by the young son and daughter of Dr. Rahul Pandit, a Kashmiri Hindu activist.