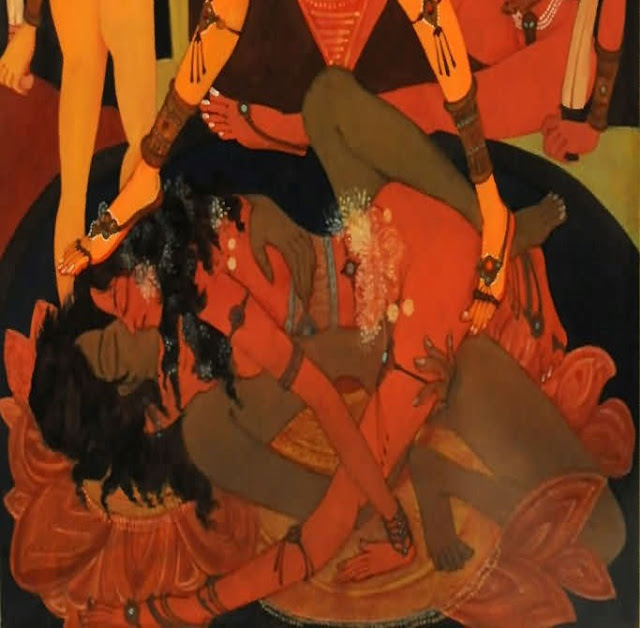 Many know by now that my Ishta Deva (favorite deity) is Kama, the Hindu god of War, Love & Sex. I had explained why I worship this sometimes outcast god in another blog post (see here) but let me quickly repeat my love for Kama Deva here. Kama Deva first appears the the Atharava Veda where he is a dark and passionate warrior who burns up the enemies and infects them with evil thoughts to drive them mad.  However, Kama Deva is not at all a possesive god, nor does he ask for center stage, he is noted for bringing all the other gods with him, for giving those who pray to him the friendship of the other deities. The Devi Purana says that Kama is this ultimate protector because he lacks jealousy, his supreme self confidence helps him rise above the petty rivalries of the other gods, and when all others are consumed with jealous battles, Kama Deva rises as the protector of human and animals.

“The Lokapâlas (gods of the directions), being overcome by the fever of jealousy and pride, become quite unable, either individually or collectively, to quit their jealousies and to protect the tripeds, quadrupeds, reptiles and snakes; so Thou art the God.” – Devi Purana, Book 8, Chapter 9, Versus 19-23

Even though Kama is a confident and passionate protector, his confidence and passion tends to scare other gods and humans as he lacks many of the social apprehensions concerning both sex and hierarchy. Many fear his devious nature and his ability to distract their minds and inflame them with lust, and so Kama is often shooed away by the gods and hidden by modern humans who do not appreciate his great love for humanity.  What I love most about Kama Deva is that even though he lives on the borders of Hindu society, he works in the shadows of the forest to guide and protect the unlikely heroes.  The Hindu festival of Navaratri features Kama Deva as the god who aided prince Sudarsana in restoring not only his kingdom but also Durga worship.  Sudarsana had been less favored by the people over his handsome but rather godless brother Sutrujit.  When Sudarsana found himself an outcast in the woods, it was Kama Deva who brought him to the goddess Durga’s power and thus his ability to retake his kingdom and restore dharma. Only Kama saw the potential of this unlikely and plainly hero.

The kings said :– “O king! You got afraid and went in your very early age to the forest; how is it, then, that you have been able to know the excellent Goddess Mahâmâyâ. How did you worship and pray to Her? That She, becoming so glad, has favoured you and so helped you?” 42-43. Sudars’an said :– “O kings! Early in my childhood, I got the excellent root-mantra of desires, Kâmavîja; daily I meditated and silently uttered that mantram. After that I came to realise through the Risis That Eternal Auspicious Mother; and since that time, day and night, I always used to remember that Highest Deity; with the greatest devotion.” – Devi Purana

However it is Kama’s more lurid exploits which brings us to this Hindu penance of Anang Thriyodasi, yet another rather unknown festival to Kama, one even I was unaware of until only a few days ago. Is it fortuitous that yet another Kama festival should fall just before Easter, the holiday which Christians stole from our Pagan cousins in Europe? I’ve been writing vigorously in an attempt to expose the twisted nature of the Christian interpretation of Easter which is linked to Passover, a celebration of pagan child sacrifice (see here). My assertion has been that Easter was originally a festival to the German fertility goddess Ostara, who is likely a cognate of the Hindus goddess Ushas, goddess of the Dawn. There is another goddess who is likely at least distantly related to the Easter mythology and that is Ishtar, the warrior-sex-fertility goddess of Babylon, one of the arch enemy goddesses of the Christians. Ishtar bares an uncanny resemblance to our warrior-sex goddess Chinnamasta whose ancient festival also falls in April.  I’ve been pushing the the idea that we should replace Christian Easter with Ushas and Chinnamasta pujas, the Hindu versions of Ostara and Ishtar whom the Christians believe they have defeated. It makes sense that Kama Deva has a festival at this very same time as Chinnamasta, as Kama Deva is the source of Chinnamasta’s power, she stands upon a copulating Kama and Rati.
See: Hindus can erase “Easter” with Ushas and Chinnamasta Puja
See: Confession at the Brahma Temple and the Goddess Chinnamasta 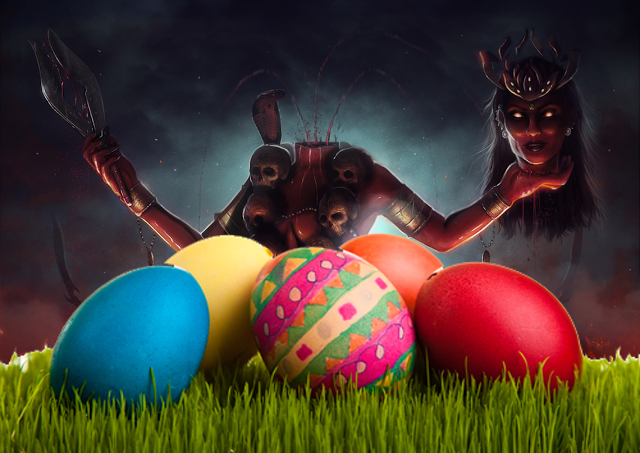 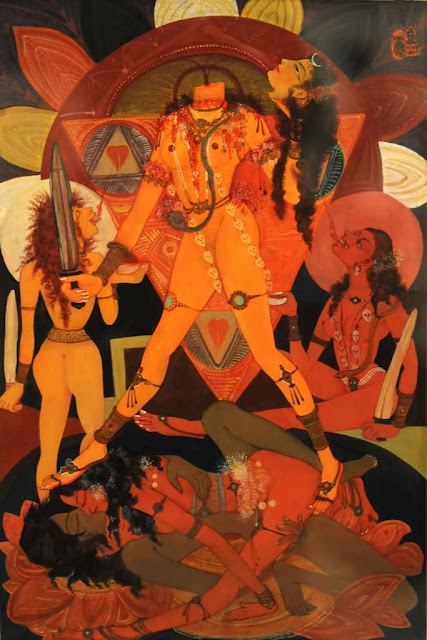 The penance of  Anang Thriyodasi Vrata actually gives me a chance to introduce another goddess associated with Kama Deva and this is his consort Rati. The penance of Anang Thriyodasi Vrata actually focuses more on Rati than Kama himself.  Rati is portrayed in scripture as a beautiful seductress who is able to rouse the passions of even the gods. Rati perhaps plays the center role in Anang Thriyodasi Vrata in that it involves her grief over the loss of her companion Kama Deva and Shiva’s promise to restore him.  To see the whole story behind Kama’s first death please see “Why I worship the god of LOVE“. In short, Kama Deva is sent out on a dangerous mission by the other gods to awaken Lord Shiva, the god of destruction.  Shiva has fallen into deep sorrow at the lost of his wife Sandhya and has retreated for the universe.  Without Shiva’s powers of destruction, negative energies and “demons” begin to fill the earth and torment the gods.  Shiva’s wife Sandhya has since reincarnated as Parvati but she cannot rouse Shiva’s love or passion.  The god’s ask Kama Deva to strike Shiva with his love arrows, knowing this is likely a suicide mission because Shiva will awake in burning wrath and immediate kill whomever has struck him.

‘Through many autumns have I toiled and laboured, at night and morn, through age-inducing dawnings. Old age impairs the beauty of our bodies. Let husbands still come near unto their spouses. For even the men aforetime, law-fulfillers, who with the Gods declared eternal statutes,— They have decided, but have not accomplished: so now let Wives come near unto their husbands. – Rig Veda 1.179.1-2

Being the ultimate protector that he is, Kama willingly awakes Shiva’s passion to save the world, but he is burned to death in the process when Shiva expectedly strikes him with fire.  However Shiva finally sees that his wife has returned to him in the form of Parvati and once again falls in love and finds happiness in life.  But Rati is inconsolable, heart broken at the loss of her Kama Deva.  The Gods go to Shiva and explain to him that it was not Kama’s fault and that he was only acting to help save the universe.  Shiva understands this and consoles Rati by granting that both Rati and Kama Deva will be reincarnated together in the same city sometime in the future and will marry once again.

Kamadeva became terrified, he started remembering god, but before the deities could come at his rescue the third eye of lord Shiva got opened and Kamadeva was reduced to ashes. Parvati got scarred after seeing Lord Shiva in such a destructive anger. She went to her house along with her companions. Rati- the wife of Kamadeva wept unconsolably. The deities arrived and consoled her by saying that by the grace of lord Shiva, her husband would be alive once again. After that the deities went near lord Shiva and did his worship. They told him that it was not the fault of Kamadeva, as he had acted in accordance with the aspirations of the deities. They also told him the mystery of Tarakasur’s death. The deities then requested him to make Kamadeva alive once again. Lord Shiva told the deities that Kamadeva would take birth as the son of Krishna and Rukmini in the era of dwapar. A demon by the name of Shambar would throw him off in the sea. He would kill that demon and marry Rati, who too would be living in a city near the sea. – Vishnu Purana

The penance of  Anang Trayodashi Vrata (aka Madhana Kama Thriyodasi) celebrate’s Rati’s committed love to Kama Deva.  The penance takes place on the 13th day (Trayodashi means 13)  of the Hindu month of Chaitra (March-April) and fell on April 8th this year of 2017. Fruits and flowers are brought to images of Shiva, his wife Parvati and Kama and Rati. Those who engage in this puja are granted marital love and harmony, as well as health and wealth and good forunte.

Anang Trayodashi Vrata – This austerity is related with the worship of Lord Shiva and commences on the thirteenth day of the bright half of the Hindu month Margashirsh and lasts for a year. It concludes exactly after a year when ‘Rati’ and ‘Anang’ are worshipped with appropriate rituals. Ten thousand offerings are made in the sacrificial fire. Brahmins are fed and donations made to them. One who observes this austerity is blessed with health, wealth and good fortune. – Garuda Purana 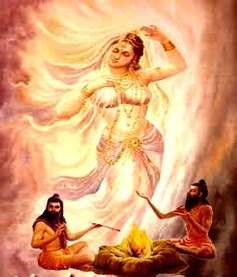 I am very happy to find yet another penance to my lord Kama Deva as he is all to often shunned in mainstream society.  Anang Thriyodasi Vrata celebrates the love Rati had for Kama and Shiva’s grace in reuniting them through reincarnation. It makes sense that Kama appears during this spring festival time as he is a god of fertility.  However their is something more auspicious in the uncovering of this holiday for me, I’ve made it clear I’ve declared war on Christian Easter, that I wish to unite the European and Hindu goddesses who are the rightful owners of this festival.  Kama is not only a fearsome warrior but also the energy behind Chinnamasta, the very goddess we must call upon to thwart the Christian god and return Easter to its rightful place. Now with Kama and Chinnamasta puja in place, we are ready for this Easter battle and those in the future until we have claimed victory over the jealous Christian god and his reign.
Please Sponsor My Writing On Patreon:
https://www.patreon.com/posts/8789014
Support My Writing & Activism
Purchase Elemental Gita
https://www.createspace.com/7018086 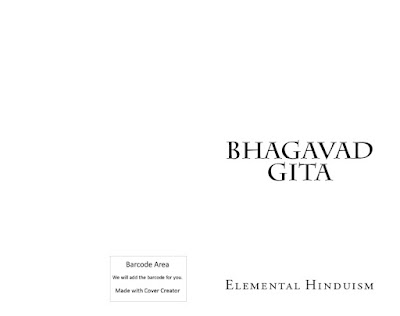 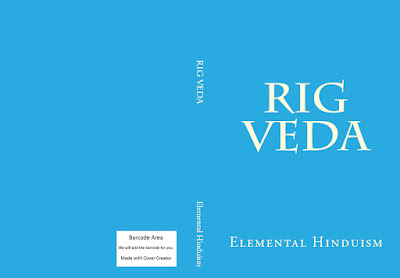 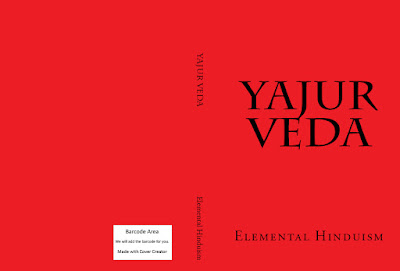 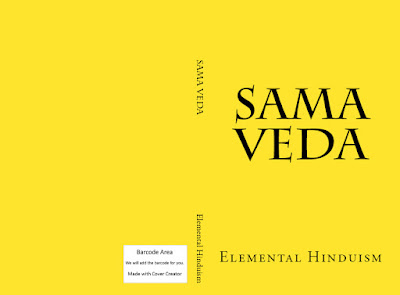 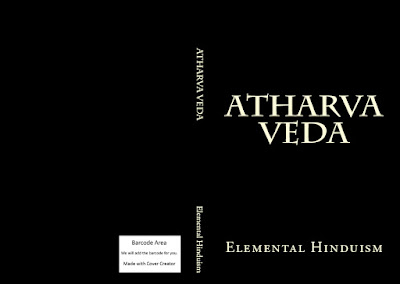