WHN
Group of Gandhians packs up 33-year-old protest against cattle slaughter outside the Mumbai abattoir.

The longest-running satyagraha in India came to an end on Tuesday. This three-decade-long civil disobedience campaign was not demanding the end of colonialism, temple entry for Dalits or the abolition of taxes on salt. Its aims were rather more modest: to stop the slaughter of bulls and bullocks for meat in Maharashtra. That goal was achieved earlier this week when the President gave his assent to the Maharashtra Animal Preservation (Amendment) Bill.
The protest had been carried out every day since 1982, at the bail (bullock) gate of the Deonar abattoir in Mumbai. The facility can handle about 4,000 animals a day. Every morning for more than 30 years, a group of committed satyagrahis – their numbers were once in the dozens but were eventually reduced to twos and threes – would accost trucks carrying bulls, bullocks and buffaloes entering the compound. Having thus broken a law they believe is unjust, they would be detained by the police constable manning the gate and taken to the Deonar police station. Their gentle protest did not give rise to any hard feelings: they were always let off immediately to go back to their quarters, only to repeat the process the next day.

On Wednesday, one day after the beef ban came into force, there are no satyagrahis at the bail gate. At the makeshift tarpaulin tent built for the protestors, there was a posse of policeman standing guard against against any trouble that the order might cause.

“Why would they come here anymore?” asked Jairam Shilke, the policeman manning the bail gate, smiling broadly. “They have achieved their aim!”

Had the satyagraphis ever caused any trouble? “Never,” said Shilke. “They would come here, protest peacefully and then we would arrest them. Everyone respected them, even the residents of Deonar.”

Deonar is a predominately Muslim neighbourhood, with a large expanse of slums. Until the 1980s, it was considered miles out of the city but has since been enfolded into Mumbai’s contiguous urban expanse. The city’s municipal corporation opened the abattoir here in 1971 after shutting down slaughterhouses in Bandra and Kurla.

At a tea stall located besides an electric-green mosque, Shamsher Ahmed, the owner of a hair salon, confirmed what Shilke had said. “We had no trouble with them,” he said. “They had their vichardhara [ideology] and they tried to convince people. Not like the Bajrang Dal who would come here every Eid just to try and cause trouble.”

Though the satyagrahis aren’t in Deonar anymore, Scroll visited them in their quarters not so far away, in a spartan dormitory in the Sarvodaya Hospital building in Ghatkopar. Their room was furnished only with metal cots and small cabinets to hold the protestors’ everyday things: hair oil, bottles of medicine, honey and, of course, mobile phones. This is where the protestors have lived since they answered the appeal of Gandhi’s follower Acharya Vinoba Bhave in 1982 to join a satyagraha to end gohatya in Maharashtra. Cow protection was a major part of Gandhi’s politics – which is why it found its way into India’s Constitution as a Directive Principle. 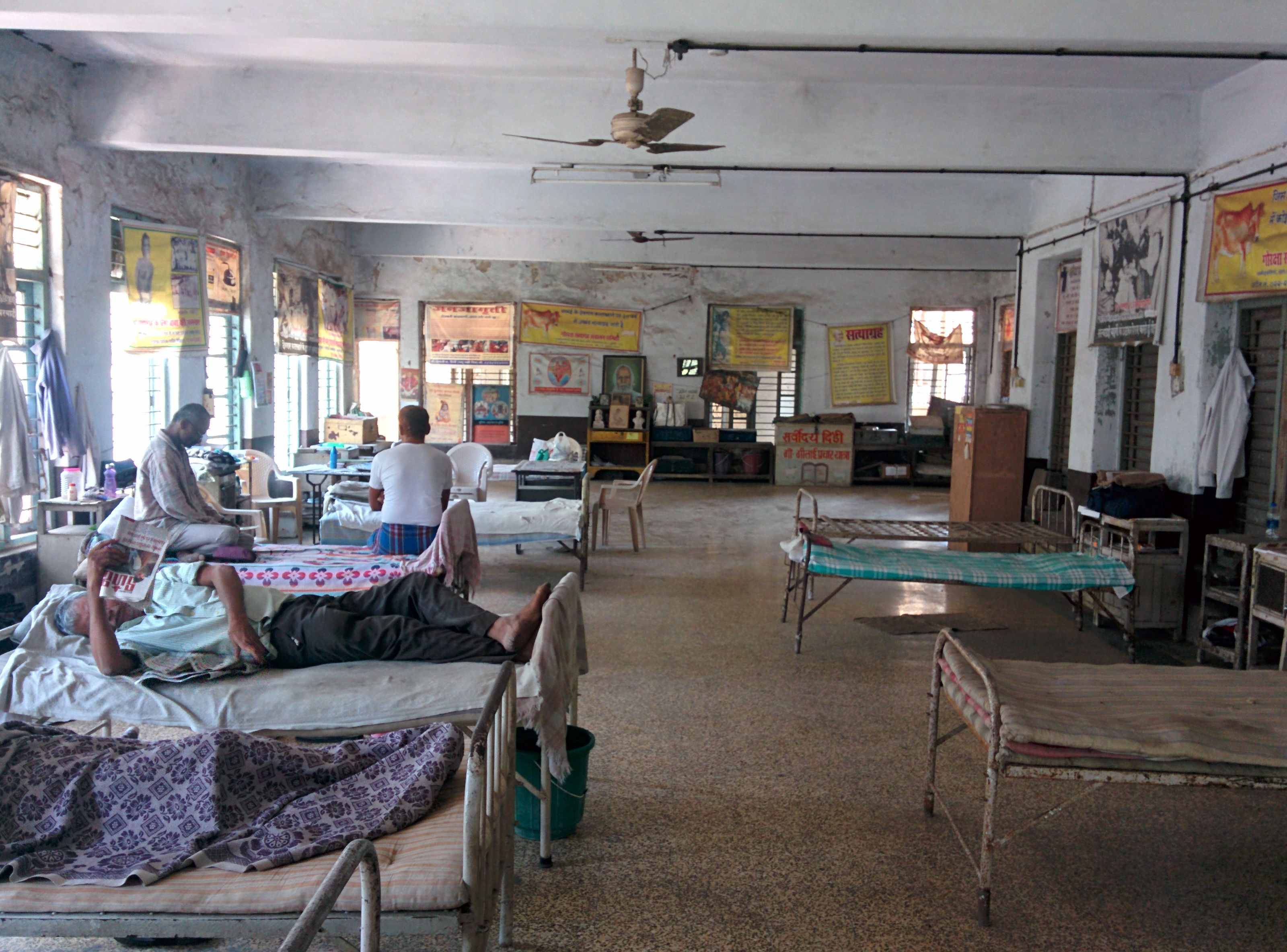 There are only three satyagrahis left in Mumbai now, though two of their companions had evidently gone back to their villages to harvest their fields. Sunil Jhadav, Pannu Lal Sahay and Baldevraj Ilwadhi explained the history of the satyagraha. After Vinoba Bhave called for the protest, Achyut Deshpande, his key lieutenant, started the Deonar satyagraha.

“I am happy…but also somewhat unhappy” with the invocation of the beef ban, said Ilwadhi, a wonderfully energetic 74-year old. “Vinoba Bhaveji was Gandhiji’s deputy. That deputy and his followers had to perform satyagraha for 33 years. Why didn’t you listen to him right away? Was he mad? The government killed so many animals for so many years that there are hardly any cattle left in the country. And now after killing all the animals and making a joke out of satyagraha, the government has passed this law.”

The reason for the ban

But what’s so bad about cow slaughter? The satyagrahis marched out a laundry list of reasons. Global warming: cows emitted more greenhouse gases than cars. The abattoir uses lakhs of litres of water and had so many lights there that it “resembles Diwali”, which leads to high power bills. The practice destroys the rural economy, since farmers don’t have enough bullocks with which to plough their fields. It causes a milk shortage, which means that the milk we’re drinking is “adulterated” with imported milk powder.

Ilwadhi – otherwise a firm believer in swadeshi – had much to recommend in the solutions Western countries had found to animal-related challenges, using scientific research. “In Germany, studies show that the buried corpse of a slaughtered cow makes the ground barren,” he said. “Burying the corpse of a cow which has died of natural causes, on the other hand, makes the ground even more fertile.”

Fifty six-year old Sahay added: “All animals who give us milk are like our mothers.  Any animal that gives us food needs to be protected.”

But don’t non-milch animals deserve to be protected too? “Of course, they do. We are against all hinsa [violence],” said 49-year old Sunil Jhadav. “Nothing should be killed. Not even germs. That’s why I don’t ever get any allopathic treatment done.”

The matter of personal dietary choice was also peremptorily dismissed. “No one would want that,” declared Sahay confidently. “All religions, even Islam and Christianity, prohibit beef.” He pointed to a poster on the wall, on which was a quote apparently by Jesus himself: “Killing a bull or cow is the same as killing a human being.”

He added: “And Muslims don’t prefer to eat beef too. The Mughals had banned cow slaughter. Emperor Akbar instated the death penalty for cow slaughter. It was only the British who removed it.”

While their aims might have matched here, it was clear that the Gandhian approach to goraksha was quite different from that of the Sangh Parivar. The satyagrahis were attempting a fine balancing act in trying to portray the act of cow protection as a secular one that involved every Indian community. 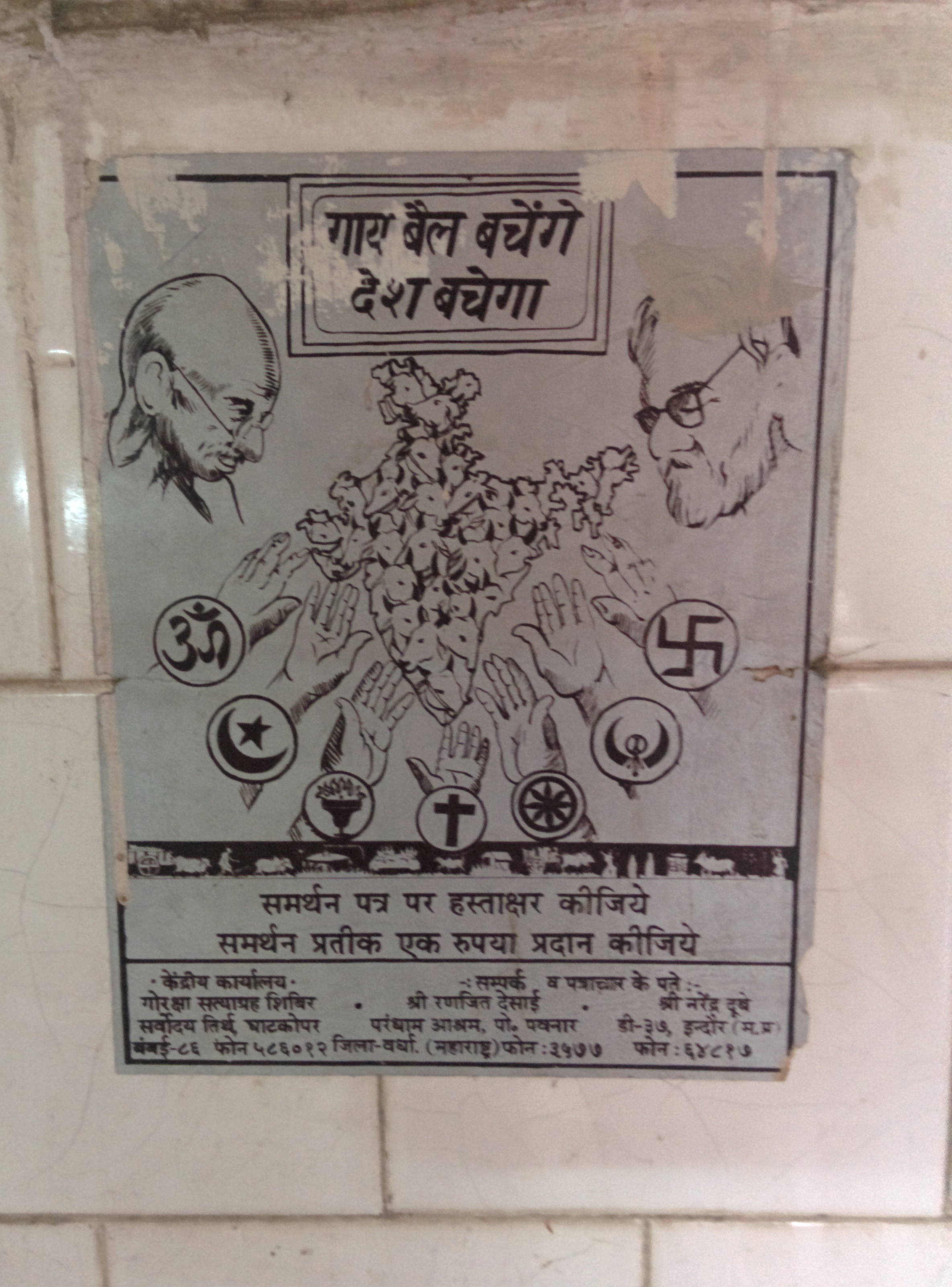 There was also a biological edge to their argument. “Humans are simply not meant to eat meat,” said Ilwadhi. “Did you know that pigeons never go near the Deonar abattoir? Only crows, dogs and flies are found there. It’s unnatural. Even the Americans have researched this. We can’t digest meat.”

He claimed that meat eaters are violent. “All terrorists are meat eaters,” he claimed. “Horses are vegetarian and so are rabbits – see how docile they are. Yet the government sends out all sorts of incorrect propaganda saying that eggs have protein and we should eat more eggs.”

Despite their recent victory, though, they say their work isn’t over. “We need to now fight for a national law,” said Jhadav. “Only 14 states have banned cow slaughter. Until it’s banned all over the country, it’s of no use: cattle will simply be transported to states where slaughter is legal.”

Everyone nodded at this sombrely. There seemed to be a remarkable lack of joy in the room considering that the aim of this satyagraha had been achieved after 33 years.

Jhadav displayed a goraksha samiti receipt that he had filled up after accosting a cattle truck entering the abattoir on Tuesday. On it was the number of the truck, the quantity and type of cattle it carried, the time of the protest and was, curiously, signed by the constable on duty. Even satyagraha wasn’t complete without its paperwork.

“This was the last truck that entered Deonar,” Jhadav said, proud of being a part of what was clearly a historic moment to him. “Within a few hours, the order reached the abattoir to stop taking in bulls and bullocks”.