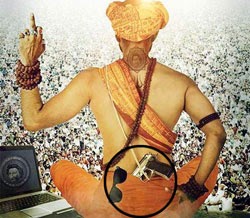 Lack of unity amongst Hindus is the cause of attack on seats of worship of Hindus through films !

Is there any film produced so far depicting a Christian missionary or maulana in derogatory manner ?

Mumbai : In a film titled ‘Global Baba’, a criminal has been shown as becoming a fake ‘baba’ to protect himself from police encounter and cheating people. Later, by combining Dharma and politics, he reaches very high post and tries for getting elected to the highest post in democracy.

His misdeeds are exposed by one woman reporter. This is the story of the said film. ( Few days back, news about a maulavi raping a minor girl in mosque was published. Pope Francis has claimed that 2 % of ‘Fathers’ out of more than 4, 00, 000 ‘Fathers’ in the world i.e. 8000 ‘Fathers’ are sexually exploiting nuns and small children. Why does nobody produce films on these topics ? Why film producers feel that there is superstition only in Hindu Dharma or are they scared of united opposition of fanatics ? Hindus should try to see that the Film Censor Board does not grant permission to films in which thre is attack on Hindus’ seats of faith ! – Editor, Dainik Sanatan Prabhat )

The posters of this film also exhibit vulgarity. This film will hurt religious sentiments of Hindus and Hindus are likely to oppose to this film. It is propagated that the film is based on ‘Yoga-rhushi’ Baba Ramdev; but it has hurt sentiments of followers of Baba Ramdev. (‘ Yoga-rhushi’ Baba Ramdev has glorified the name of this country in whole world through ‘Yoga-shastra’; by re-introducing ‘Yoga’ to the world with new vigour. Indians including all of his followers should strongly oppose this film ! – Editor, Dainik Sanatan Prabhat )  The film is going to be released in either October or November. The story of the film has been written by Suryakumar Upadhyay and is directed by Manoj Tiwari. It is the first film produced under the banner of ‘Vijay Arts Production’.