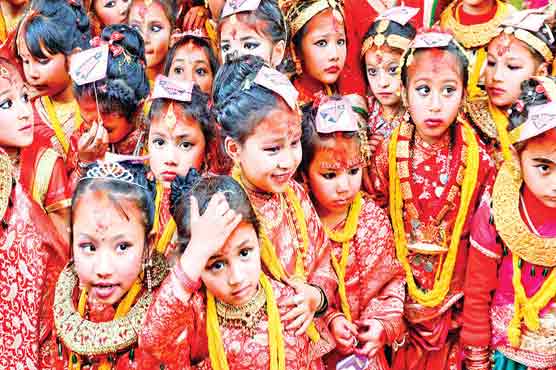 The centuries-old custom is believed to protect girls from the stigma of widowhood.

KATHMANDU (AFP) – It s a big day for nine-year-old Nepali schoolgirl Riddhima Shrestha and her three-year-old sister, Ishita, as they dress up in silk brocade and gold jewellery, preparing to wed a Hindu god.

The two sisters are among dozens of girls taking part in the “ihi” or “bel bibaha” ceremony — a coming-of-age ritual practised by Kathmandu s indigenous Newar community, whose customs combine elements of Hinduism and Buddhism.

The centuries-old custom is believed to protect girls from the stigma of widowhood by ensuring that a Newari woman s first husband — the god — will inevitably outlive her mortal spouse.

During the ceremony, girls hold the bel fruit, also known as a wood apple, in one palm and touch a statue of the god with the other, symbolically giving Vishnu their hand in marriage.

The girl s parents also secure their place in heaven by performing “kanyadaan” — the practice of giving away one s daughter in marriage — according to the priests who conduct the ceremony.

“These are traditions handed down by our ancestors, we have to follow them and keep them alive. It is our culture,” said Dipendra Shrestha, father of the two girls.

After the rituals end, with gifts for the bride followed by a feast for family and friends, it s back to school for third-grader Riddhima, who is the first of her classmates to go through the ceremony.

“My friends were curious about it, it was fun to tell them about it,” Riddhima told AFP.