Zee Media Bureau
Islamabad: Pakistan has very strict blasphemy laws when it comes to Islam but for the minority Hindus living in the Islamic republic everyday is a fight to save their honour and beliefs.

The minority community is livid after some shopkeepers in Pakistan’s Sindh province allegedly sold shoes with sacred Hindu word ‘Om’ inscribed on it.

The patron-in-chief of the Pakistan Hindu Council (PHC), Ramesh Kumar said that they had already lodged protests with the Sindh government and local authorities in Tando Adam Khan after it was brought to the notice of the Hindu community that shoes were being sold with the sacred word ‘Om’ inscribed on them.

“It is most unfortunate that some shopkeepers in Tando Adam Khan are selling shoes on the occasion of Eid ul Azha with the Hindu sacred word inscribed on them and the purpose just appears to be to insult the sentiments of the Hindu community,” Kumar said.

“The pictures of the these shoes have been circulated on the social media by concerned members of the Hindu community and we demand they be removed from the shops immediately,” he said.

Kumar added the sale of such shoes was an insult to the Hindus in Pakistan as it is blasphemous to use the sacred word ‘Om’ on shoes.

“As ‘Om’ is the sacred religious symbol of Hinduism which talks about the oneness of God, let’s protect this oneness peacefully for the progressive and positive face of Pakistan. Let’s appeal the authorities concerned to take notice of the matter immediately to override any expected mistrust within the locals,” said another statement released by the Pakistan Hindu Seva.

The local Sindhi newspapers have also reported that similar shoes were also being sold in some other places of Sindh.

The issue has caught the attention of the Twitterati: 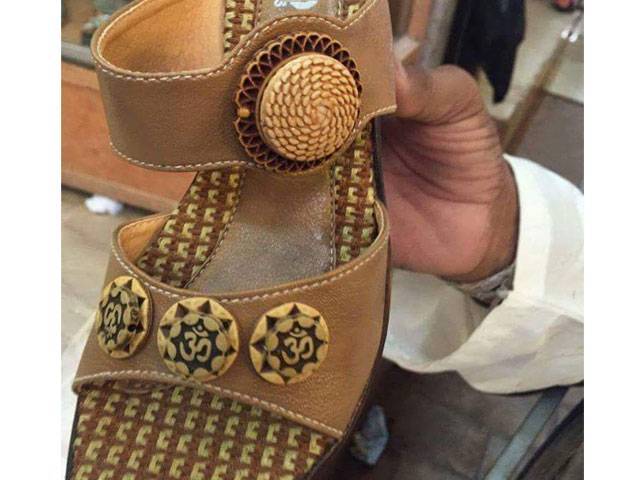 Om on shoes in Tandooadam?
That’s too much of disrespect. Stop insulting other religions.