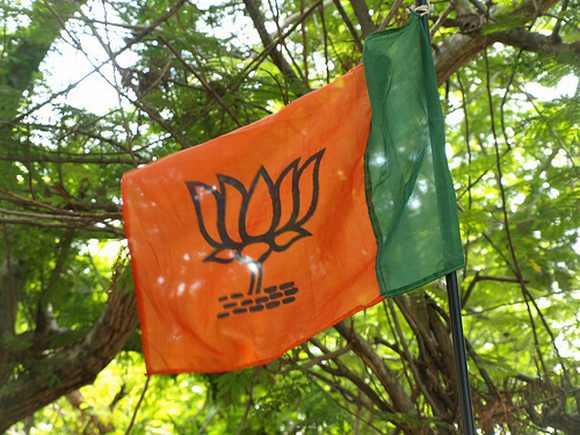 One cannot but infer that this brouhaha is a crafty ploy to create an issue out of a non-issue. An overview of post-independent India’s history reveals that it is not the BJP or the Sangh Parivar but Marxist historians who have been guilty of debasing history to suit their vested interests, says Vivek Gumaste.

It is deja vu all over again — to use the grammatically redundant phrase popularised by the Yankee ex-manager Yogi Bera. The same hackneyed charges are been bandied around, the same shrill diatribes replete with half-truths, hyperbole and innuendos rent the air and as in the past one finds that there is more fluff than substance in these accusations.
It is a ditto replay of the early days of the first Bharatiya Janata Party government (in 1988) when its ideological detractors went into an overdrive mode to discredit the party. Unsubstantiated charges about distortion of history and saffronisation of education were levelled against the government, needless controversies were engendered and sordid rumours about church-burning planted with impunity — all with the express intent of creating a climate of fear, apprehension and uncertainty about the motives of the new government.
After suffering a devastating defeat in the recent elections one would have expected these worthies to exhibit some good sense. But alas, old habits die hard and they are back to turning dirty tricks in order to distract the BJP from focusing on good governance.
Firing the first salvo in this version 2.0 of this ideological battle was one of the usual suspects, Sitaram Yechury a Communist Party of India-Marxist politburo member and MP. In an article sensationally titled, ‘Poison pen: Attempt to rewrite India’s history is dangerous’ (Hindustan Times, July 14) that is logically flawed, factually challenged and reeks of ideological prejudice, he charges the BJP with attempting to mangle history by wilfully destroying historically sensitive files. The specific file in question being one that reflects the minutes of a cabinet meeting prior to announcing Mahatma Gandhi’s death in 1948.
Imputing a covert design to a simple act of housekeeping, he claims that this disposal of outdated files is a part of a larger sinister agenda: ‘This is part of the overall project of rewriting Indian history in order to negate its rich diversity… It is part of the overall objective to straightjacket Indian history into a monolithic record of the glorification of ‘Hindus’ alone. Such an effort will necessarily have as its immediate corollary the danger of changing our entire education system and syllabi to dovetail the advancement of the Rashtriya Swayamsevak Sangh project.’
Let us recapitulate the current train of events and scrutinise them to test the validity of this charge.
On June 23, PTI reported that: “On the direction of Prime Minister Narendra Modi, the Union home ministry is on a cleanliness drive… has destroyed nearly 1.5 lakh files that had gathered dust for years. While going through the steel almirahs of North Block, officials also found some interesting files which gave an insight to some historic moments.”
One ‘interesting file’ had details about the cabinet meeting alluded to above. When asked whether these files were saved or junked, an official expressed ignorance.
Subsequently, Home Minister Rajnath Singh clarified the misperceptions emanating from the PTI report in his statement to the Rajya Sabha on July 14.
One, he indicated that the process of identifying the files to be destroyed was done between August 9, 2012 and May 2, 2013 during the UPA regime. Two, he told the House that destruction of the files had been done in accordance with existing government regulations. Files of historic importance are usually sent to the National Archives. Third, he assured the House that no file relating to Mahatma Gandhi, former President Rajendra Prasad, former Prime Minister Lal Bahadur Shastri or the last Indian Viceroy Lord Mountbatten had been destroyed.
The assertions of Yechury’s article that there is an attempt to rewrite India’s history need to be analysed in light of the above facts. If historical files were not destroyed in the first place as per the home minister, then the entire premise of the article falls apart and none of the corollaries that follow like distortion of history and saffronisation of education hold water.
Therefore one cannot but infer that this brouhaha is a crafty ploy to create an issue out of a non-issue. An overview of post-independent India’s history reveals that it is not the BJP or the Sangh Parivar but Marxist historians who have been guilty of debasing history to suit their vested interests as this excerpt from Rajeev Srinivasan’s article, ‘Indians Will No Longer be Impressed with Marxist Histrionics’ indicates:
“The West Bengal government in 1989 issued guidelines that said: ‘Muslim rule should never attract any criticism. Destruction of temples by Muslim rulers and invaders should not be mentioned.’ Dated 28 April, 1989, it [the circular] is issued by the West Bengal Secondary Board. It is in Bengali, and carries the number “Syl/89/1”.
“All the West Bengal government recognised secondary school headmasters are being informed,” it begins, “that in the history textbooks recommended by this board for class IX the following amendments to the chapter on the medieval period have been decided after due discussions and review by experts.”
Written in Bengali and designated as true (Shuddo) and false (Ashuddo), some of these deliberate distortions are listed below.
Ashuddo: “Sultan Mahmud used force for widespread murder, loot, destruction and conversion.”
Shuddo: “There was widespread loot and destruction by Mahmud”, i.e. no reference to murder or forcible conversion.
Ashuddo: “The non-believers had to embrace Islam or death”.
Shuddo: All matters on this page to be deleted.
Ashuddo: “He looted valuables worth 2 crore dirham from the Somnath temple and used the Shivling as a step leading to the masjid in Ghazni.”
Shuddo: Delete “and used the Shivling as a step leading to the masjid in Ghazni.”
In addition, the BJP has been exonerated by the Supreme Court. Responding to a PIL filed by Aruna Roy and others, the apex court in its verdict of September 12, 2002 categorically dismissed the libel that the BJP government had tried to saffronise education.
The BJP must dismiss these catcalls with the derision they merit and concentrate on its goal of national development.