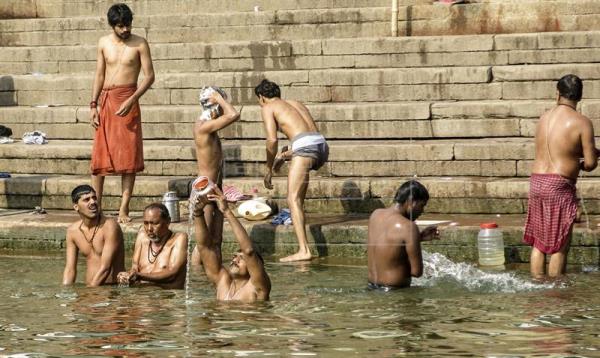 VARANASI, India – A stream of waste pollutes the river Ganges, a waterway considered sacred by India’s Hindus, in the northern city of Varanasi.

The waters pass through important pilgrimage spots, including this one, where millions of followers of Hinduism take dips in search of salvation, oblivious to the toxicity in every drop of “Mother Ganga.”

For Hindus, the Ganges represents a deity that washes away one’s sins when a bath is taken at five different points in the city.

Hindus can also worship from a distance by lightly touching the waters, submerging in the river and even drinking a few sips.

Ghats, which are steps that lead to the waters of the river from the streets, are where people take part in this worship, accompanied by thousands of others involved in lesser spiritual engagements, such as washing clothes and cleaning themselves.

The statistics, however, are clear – in some sections of the Ganges in the city, such as at the point of its confluence with the Varuna River, levels of fecal bacteria reach 31 million parts per 100 milliliters of water.

At the popular Tulsi ghat, the level reaches 51,000 parts per 100 milliliters, while the maximum level recommended for taking a bath is 500 parts and zero for consumption.

The figures are from samples collected on Jan. 20 by the Sankat Mochan Foundation, an organization with its own laboratory that has been fighting for the past 35 years to return the Ganges to its previous splendor by introducing new technologies for effective treatment of waste water.

“The river is in a pitiful state,” the foundation’s head, Vishwambhar Nath Mishra, told EFE, adding that the situation was alarming along the five kilometers (3.1 miles) where people “interact” with the waterway.

According to a 2006 study from the International Journal of Environmental Health Research, people can contract cholera, hepatitis A, typhus and gastrointestinal diseases from the waters of the Ganges.

For Mishra, the solution to this problem is to intercept waste water, preventing it from reaching the river, and redirect it for treatment and recycling.

Officials, however, have only made unrealistic promises regarding cleaning up the Ganges, Mishra said.

Water Resources Minister Uma Bharti “now says it will be cleaned by 2018 – just before the next parliamentary elections. I would like to know what magic has she learned, because how can something not done in 30 years be completed in two years?” Mishra asked.

The problem of pollution in the Ganges is present not just in Varanasi, but throughout the 2,525 kilometers it flows, starting from mountains in the Himalayas and ending in the Bay of Bengal.

There are some 400 million people, accounting for one-third of India’s population, living along this stretch who are dependent on the river’s waters.

According to the National Mission for Clean Ganga, which falls under the Water Resources Ministry, the Ganges receives 12 billion liters of waste water per day; however, only one-third can be treated.