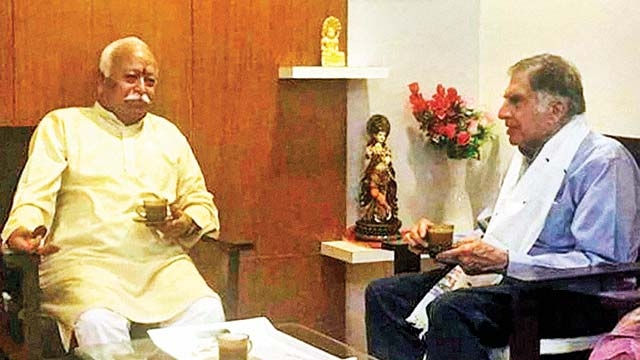 Tata who is facing a legal battle with the ousted Tata Sons chairman Cyrus Mistry held discussions with Bhagwat on charity work done by RSS and also apprised Bhagwat about charity work his group is undertaking.

Tata had sought an appointment with Bhagwat a few months back and since Bhagwat had time on Wednesday, it was conveyed to Tata. BJP state unit office bearer Shaina N C who played an important role for the meeting accompanied Tata during his one-hour visit to Reshim Baug headquarters of RSS and a 30-minute meeting with Bhagwat at Mahal, which is 3 km from Reshim Baug.

When contacted by DNA Money, the media agency representing Tata Sons did not offer any comment on the purpose of this meeting.

Replying to a question on whether the meeting between the two would help Tata in any way or whether they discussed ongoing battle within the Tata group, RSS Akhil Bharatiya Prachar Pramukh Manmohan Vaidya said there could be a mention of this subject but they both discussed service to the society by RSS and charity work of Tata group. Vaidya said there was no close door meeting between the two and they met for 20 minutes in presence of a few Vidarbha office bearers of RSS.

Vaidya said that RSS never advertises its social work since it is being done through various organisations and RSS only runs shakhas for nation building. When contacted, Shaina NC said Bhagwat greeted Ratan Tata on his birthday and felicitated him with a shawl. RSS insiders informed that RSS chief has a busy schedule and keeps moving all over the country. Shaina NC said since Bhagwat was in Nagpur on December 28 and Tata wanted to see the Reshim Baug headquarters as well as meet Bhagwat, he accepted yesterday’s appointment.

Vaidya also confirmed that it was a scheduled meeting between Bhagwat and Tata. He said his own programmes are scheduled for three months and are generally not changed.