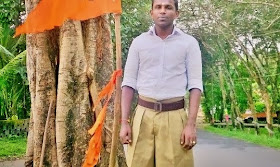 The incident took place yesterday afternoon, in Pathanamthitta, in front of the Muthoot Hospital when the workers were doing the routine repair works on the 11kv electric lines. It was during the course of this work that the KSEB section office employees, Aji M Varghese, Anil Kumar, and Rajeev were struck by an electric current, which gave them a shock. 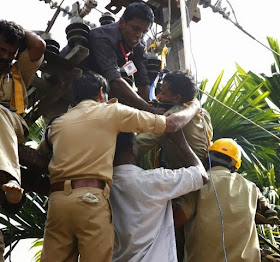 It was Aji who first got the shock. In a bid to rescue their colleague, the other two workers were afflicted too. Aji even lost balance, where he was seen dangling upside down, bleeding profusely from the mouth. In spite of the situation being so critical,however, the onlookers, who had gathered at the spot, did nothing to save the linemen.
It was at this critical juncture that Dhaneesh, an employee of the Muthoot hospital, swung into action. Even though he was dissuaded from going ahead with his life rescue mission, Dhaneesh’s presence of mind did not deter him from swinging into action, that too risking his own life.
The three were rescued using a rope. By then the fire-force reached the spot and hastened the rescue work. Dhaneesh and the three linemen are safe, said an RSS functionary applauding the timely work of Dhaneesh