Appeal to the society by RSS Akhil Bharatiya Prachaar Pramukh, Dr.Manmohanji Vaidya in the context of current violence in Pune and some other parts of Maharashtra

The recent incidents at Koregaon, Pune and various other places in Maharashtra are very sad and painful. RSS condemns such violence and feels it is despicable.  Those who are found guilty should be punished as per law. Some forces are trying to create hatred and animosity among communities. The people should not fall prey to such nefarious tactics.  RSS appeals to the public to maintain unity and harmony in the society, which have always been the top priority for RSS. 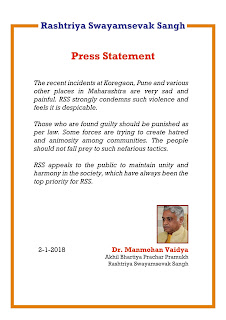