The Rashtriya Swayamsevak Sangh strongly condemns the brutal murder of Biju, a RSS worker in Kannur, Kerala and the murder politics spearheaded by CPI (M) leadership to annihilate their political opponents from their strongholds.
Kakkampara Mandal Karyavah Choorakkadu Biju was brutally hacked to death near Payyannur, a Communist Party village, in Kannur on May 12. A group of assailants in a car hit Biju’s bike near a bridge at Palamkode and severely hacked him with swords. With the gruesome murder of Biju, once again, the ruling party CPI (M) has reiterated that the party is reluctant to put down arms in Kannur and support the peace initiatives.
Taking the CPI (M) threat into account, Biju was provided with police security which was withdrawn last week. That itself implies that Biju was under CPI (M) scanner for a long time and the murder was an outcome a sinister political conspiracy. He was falsely implicated in a murder case by the Police at the behest of the ruling party and State Government. When the investigation of the case was in the right direction, the Government had intervened and changed the Superintendent of Police. .
The increased spate of murders of Swayamsevaks in Kerala under the CPI (M) regime affirms the Government’s conspicuous role in political killings. It is highly condemnable and despicable that the State Police and State machinery remain as silent spectators while the CPI (M) cadres are on killing spree towards Swayamsevaks in Kannur and other places.
The RSS demands that Police must take immediate action to bring all the murderers including conspirators to light and ensure a peaceful atmosphere in Kannur. The RSS appeals to the peace lovers in the country to protest against the continuing onslaught on basic Human Rights of the workers of the RSS and other nationalist organisations in Kerala. 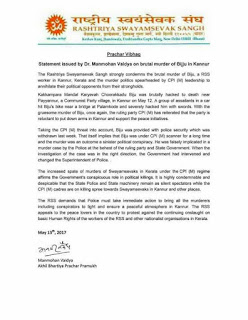