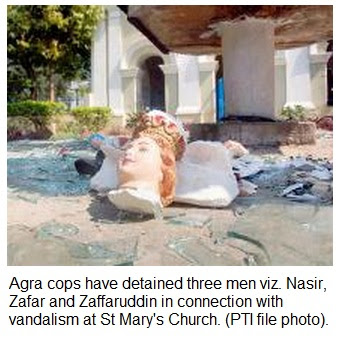 Agra : Agra police on Wednesday detained three Muslim men on suspicion that they were involved in vandalizing St Mary’s Church at Pratappura in the cantonment area of the city on April 16. Police has been tracking some mobile numbers after having some call records connected with the Church vandalization.

The SSP of Agra, Mr. Rajesh Modak said the three men, identified right now only as Nasir, Zafar and Zaffaruddin, and all between 30-35 years, had been held as they were present in the area at the time of the incident, but could not satisfactorily explain what they were doing there. Their cell phones had recorded their location.

The accused confessed to be around the church on the night of the crime and could not provide an appropriate reason for their presence there, he said.

However, family members of the accused refuted the police claims and said that they were returning from a shopping exhibition at Ram Lila ground on the day of the incident.

The family members along with the activists of Peace Party, a Muslim political outfit,  protested at the Agra Collectorate demanding the immediate release of the accused.

It is also reported that Azam Khan, the communal face of Samajwadi Party is also very much active to blame Hindu outfits for tagging them with Church vandalization and kept mum about these arrest of three Muslim persons caught by the police for their critical activities.

Earlier, two Muslims were arrested in septuagenarian Nun rape in West Bengal last month. Even in Mumbai Church attack one Muslims was named as attacker and conspirator.

Islam has its long history of iconoclasm since its inception.