Hindus have registered their protests in large numbers against SheepStop. This has compelled the T-shirt manufacturer based out of US to withdraw t-shirts hurting religious sentiments of Hindus all over.

In their official e-mail addressing one of the devout Hindu protestor, Sheepstop has quoted the following :

Hindus, offer gratitude unto ShriKrushna for this success !

Pune : Sale of T-shirts with pictures denigrating Sages, has been stopped; but no response from manufacturers

Hindus should register protest, in lawful manner, to the concerned Company ! 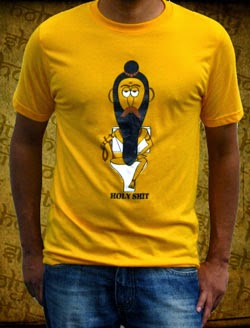 Pune : Hindu Sages have been denigrated through medium of T-shirts sold at Seasons Mall in Hadapsar area, by SheepStop Company. The denigration was stopped by activists of Hindu Janajagruti Samiti (HJS).(Hindus should note that only HJS takes initiative in prevention of denigration of Hindus’ seats of faith ! – Editor, Dainik Sanatan Prabhat)‘SheepStop’ Company was contacted in this connection but no response has yet been received from them. (Lack of unity amongst Hindus is the cause of denigration of their seats of worship and them not getting positive response. Hindu Rashtra is required to change this situation ! Hindus should unite to stop despicable denigration of their Sages ! Hindus should increase their strength to such an extent that nobody would dare to even have the thought of denigration ! – Editor, Dainik Sanatan Prabhat)

1. In a showroom of the said mall, sale of T-shirts manufactured by SheepStop, with denigrating and objectionable pictures, was going on. It is shown in this picture that a ‘Sadhu’ is sitting on a commode meditating and under his seat is written ‘holy seat’, in English. (One cannot be a Hindu if his blood does not boil after reading the above ! Why the manufacturing company did not dare to show a mulla-maulavi or a Christian missionary sitting on the commode ? Will the management of Mall allow products for sale with such pictures ? Does the Mall management realize its effects had such product was kept on sale ? Does the management want that Hindus should also react in the manner in which any non-Hindu would react ? – Editor, Dainik Sanatan Prabhat )

3. One Christian person was selling such clothes. (Such is Hindu-hatred of Christians ! Will they sell clothes with picture of a ‘Father’ sitting on commode ? – Editor, Dainik Sanatan Prabhat)

4. On 5th August, Manager of this Mall, Ajay Diwate contacted Shri. Nikhil Kulkarni of HJS and informed him that sale of those T-shirts was stopped. (Congratulations to Ajay Diwate for paying respect to Hindus’ seats of worship by stopping sale of denigrating clothes ! – Editor, Dainik Sanatan Prabhat) Shri. Diwate called up Parag Dixit, the owner of ‘SheepStop’ Company and brought to his notice, denigration of Hindu sages and Seers, taking place through sale of such clothes.

5. Dixit said that stock of those T-shirts was over; but its sale is going on the website of the Company. Shri. Nikhil Kulkarni, a devout Hindu, sent e-mail to Dixit bringing this mistake to his notice; but Dixit has not yet replied to that mail. (Those, exhibiting such indifference towards seats of worship of Hindus, will be asked to undertake rigorous spiritual practice by way of punishment, in Hindu Rashtra ! – Editor, Dainik Sanatan Prabhat)