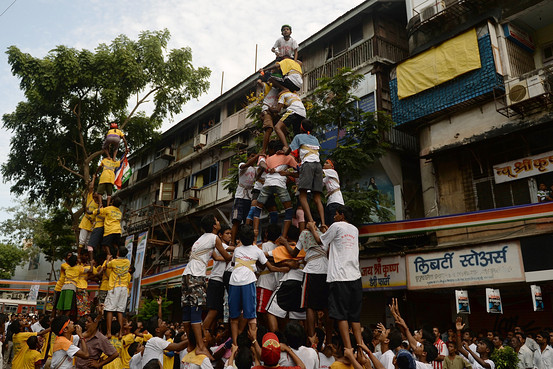 A celebration honoring the Hindu god Krishna with towering human pyramids will go ahead in Mumbai on Monday after India’s Supreme Court overturned height and age limits imposed by a lower court.

Every year for the festival of Dahi Handi, youngsters scramble to the top of human pyramids to retrieve a hanging pot, mimicking mischievous Krishna, who stole earthen pots filled with buttermilk from his neighbors. This year’s celebration is set for Aug. 18.

Earlier this week, the Mumbai High Court banned children under age 18 from participating in the pyramid-building and limited their height to 20 feet, drawing applause from children’s rights and safety groups and boos from some festival organizers. The court also directed organizers to supply helmets, safety belts, and layers of cushions to break any falls.

On Thursday, the country’s Supreme Court weighed in, lifting the height restriction and saying that children above the age of 12 could participate. The court asked organizers to have emergency medical help available, according to a Press Trust of India report.

“I’m so happy. There were so many dark clouds on our festival before,” said Maharashtra’s Medical Education Minister Jeetendra Awhad, who sponsors an annual competition with around 150 pyramid teams. Pyramids at his event can reach 40-feet-high and draw crowds of 25,000, he said.

“The court has seen the spirit of our city. Mumbai doesn’t allow anyone to fall,” Mr. Awhad said.

The Mumbai court’s Monday decision followed the death of a 14-year-old boy Saturday after he fell during a rehearsal in an eastern suburb of Mumbai, according to local news reports. Local police said they couldn’t confirm that the fall caused the boy’s death.

Pratap Sarnaik, a leader of the conservative Hindu political party Shiv Sena, cancelled his annual pyramid tournament after the Mumbai court’s Monday directive, and says he hasn’t changed his mind in light of the Supreme Court’s decision. “12 years is the right age limit…this year, we will celebrate the festival according to Hindu traditions, but the competition is canceled.”

Child rights activists say the age limit should have been at least 14. “We cannot oppose the Supreme Court, but we should work on some good guidelines for children between 12 to 18, especially 12 to 14,” said Bina Lashkari, a former member of the Maharashtra State Commission for Protection of Child Rights.