A man prays as he takes a dip in the Ganges during the Kumbh Mela. Preparing for the festival is a huge logistical challenge. European Pressphoto Agency 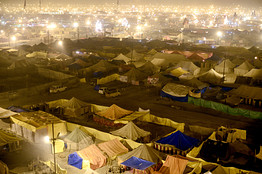 ALLAHABAD, INDIA, February 1, 2013 (Wall Street Journal):For up to 80 million pilgrims–think 10 New York Cities–a Hindu festival now taking place on the banks of the Ganges River in Allahabad, India, is a chance to wash away their sins under ideal astrological conditions.

For Suresh Dwivedi, chief medical officer at what is called the Kumbh Mela, the festival is a full-scale assault on the germs, garbage and human waste being generated in the temporary megacity that has been constructed to deal with the crowds.

To combat disease-carrying flies, 400 laborers will spray 28 tons of bleaching powder, along with the insecticide DDT, over 250 garbage pits and open drains during the course of the two-month extravaganza. They will work alongside 6,000 cleaners in green baseball caps who sweep up 56 tons of garbage a day in 4,000 chemically treated pits.

The Kumbh Mela–which translates as “water-pitcher festival”–is almost certainly the largest religious gathering on earth, and preparing for it, running it, and preventing it from turning into fatal chaos is surely one of the world’s great logistical challenges.

The festival, which started on Jan. 14 and runs to March 10, is believed to be at least two millennia old. It attracts an eclectic group of Hindu holy men, Bollywood stars, ordinary pilgrims and curious tourists who come to bathe in the Ganges, India’s holiest river, where drops of the nectar of immortality are believed to have been spilled from a pitcher by the Gods at creation.