This morning, the following tweet by an assumed journalist of the New York Times, who is the newspaper’s South Asia bureau chief based out of New Delhi, caught my attention:

She terms a correction in the textbooks as ‘disturbing whitewashing’. And calls Gujarat 2002 the worst riots since Independence.

Perhaps the foreign correspondent, who most certainly is fed information about India only by the ‘liberal’ Lutyens journalists of India, is not aware of  the Godhra carnage of Feb 27, 2002. She could be reminded of this if she talked to the unwashed masses, but that will be so uncool. But let me remind her that Godhra is part of Gujarat and that Gujarat riots started on an anti-Hindu note, so that change in textbooks is correction not whitewashing.

In case you too have forgotten, 59 Hindus were burnt alive in a single incident of Gujarat 2002 riots. You know, those stepchildren of Indian history. Even if you are guilty of the crime of being aware of this gory anti-Hindu massacre, perhaps you are not aware of how the ‘disturbing whitewashing’ of this crime happened.

Do you remember how the left-liberal complex tried to implicate the victims of the Godhra carnage in their own murders? 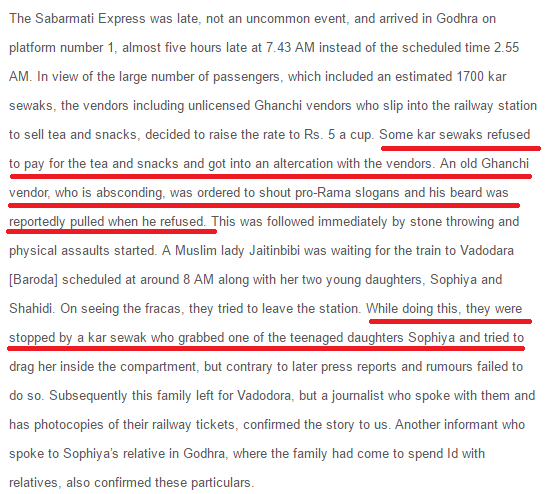 This was published in the Outlook. It’s supposed to be a “Report to the Nation” by an “independent fact finding mission”.

As many as 59 human beings perished in the fire on that fateful day in February 2002. The left-liberal complex did not hesitate to spread rumors about these unfortunate victims. Some said they didn’t pay for tea, some said they had pulled a Muslim man’s beard, some even spread rumors that they were assaulting women.

59 human beings are burned to death and the liberal “fact finding mission” reports that some of them may have unpaid debts of Rs 5. Just FIVE rupees.

In the eyes of a liberal, that’s how cheap human life, nay, a Hindu’s life can get. You must be familiar with the name of a JNU Professor called Kamal Mitra Chenoy; he was one of the members of this “independent fact finding mission”, who now appears in TV debates and newspaper columns giving lectures on equality and justice.

Some of the lies spread about the victims were even more fantastic in nature, appearing to defy even physical notions of time and space.  Here is Arundhati Roy explaining that the kar sevaks in 2002 were on their way back from demolishing the Babri Masjid in 1992!

Anything… absolutely anything to tarnish the unfortunate victims.

No liberal went to interview the family members of the Godhra victims. No liberal “fact finding mission” wanted to know who these people were and what were their hopes, dreams and aspirations that were burned inside the S-6 coach on Feb 27, 2002. Did anyone want to tell their stories and know them as fathers, daughters, mothers and husbands?

The dignity and courtesy that is denied to the victims of Godhra is ‘liberally’ extended to Kashmiri stone pelters shot by security forces, Lashkar operatives like Ishrat Jahan, dreaded criminals like Sohrabuddin, and shockingly even Osama bin Laden!

The inconvenient victims of Godhra were supposed to be lumped into a corner and forgotten. Almost literally, because there was even a lot of liberal heartburn over an allegation that some of the dead bodies had been displayed in Ahmedabad. I don’t know if this actually happened, but so what if it did? Why is it so important to liberals that these victims be denied their one last chance to rock the conscience of the nation? Will the liberals who later took selfies outside Akhlaque’s house in Dadri let me know?

Then 2004 happened. Under UPA rule began one of the most shameful chapters of Indian history, where the government got actively involved in the effort to deny justice to the victims of Godhra. Then Railway minister Lalu Yadav created a special “U C Banerjee Committee” to “investigate” the Godhra incident, the result of which was a foregone conclusion.