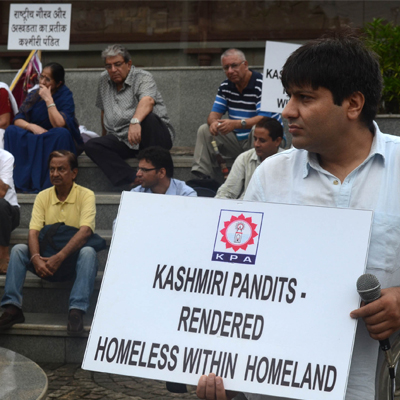 You could call it a tragicomedy or simply a farce. You could also call it black humour.

The constantly shrinking, tiny community of Kashmiri Hindus has been now identified as an ecological disaster. This is the latest label given to them. They have alternatively been called migrants, refugees in their own country, homeless and now they are also considered dangerous to the environment. The presence of 40-odd Hindu pilgrims can apparently destroy the ecological balance of their own home. That was the reason Hurriyat hardliner Syed Ali Shah Geelani gave to protest against the Konsar Nag Yatra, an ancient pilgrimage site and a revered place of worship for Hindus.

The Kashmir government rescinded permission for this yatra, clearly capitulating to pressure by the separatists. The articulate, media savvy chief minister of Jammu and Kashmir, Omar Abdullah, hasn’t yet revealed why permission for the yatra was cancelled.

Konsar Nag is a glacial lake located at 12,000 feet in the Kulgam district of South Kashmir. Close to Aharbal, a famous waterfall and tourist destination, Konsar Nag is of immense religious significance to Hindus. They believe this lake was formed after Lord Vishnu set his foot here, which is why it is also called Vishnu Paad (foot of Vishnu). According to well known poet and author Agni Shekhar, Konsar Nag is mentioned in the ancient text of Nilmat Puran. It also finds mention in Pandit Kalhan’s famous history of Kashmir, Raj Tarangini. So there is nothing ‘new’ about this pilgrimage. Before terrorism hit Kashmir in 1989-90, Hindus would regularly go to Konsar Nag. After terrorism rendered them homeless and security became an issue, the pilgrimage stopped.

For the last few years, Konsar Nag was accessed through Reasi in Jammu. This year, the Pandits wanted to revive the yatra via its traditional route through Kulgam for the first time after 24 years of terrorism. Given the precarious security situation, the Pandits decided to go together and informed the state authorities. The district commissioner of Kulgam gave them permission for the yatra. Everything was on schedule until the Hurriyat Conference intervened. They protested against the revival of the pilgrimage and forced the Omar Abdullah-led National Conference (NC) government to cancel the permission, leaving the pilgrims confused, hopeless and shattered. The reason given was the environment but, Geelani did manage to let slip that the real reason for their protest was that ‘such Yatras threaten the Muslim identity of Kashmir’.

This is not the first time the environment bogey has been raised by separatists. They know that for their intellectual supporters in the media and academia, they must provide an excuse that can be then embellished and presented in a palatable manner in opeds, seminars and general chit-chat over tea and scones in living rooms from New Delhi to New York.

Back in the Kashmir valley however, they needn’t be subtle. It was clearly communicated that the yatra was being ‘originated’ to destroy the Muslim identity of Kashmir. This was a  ‘Markaz ki chaal’ (a ploy of the central government) to destroy the Islamic fibre of the valley. India is playing Israel to destroy Kashmir.

This last excuse of Israel and Jews never fails to arouse passion. Even a stray mention of Israel and Jews is enough to get young men on the streets to protest. Geelani is an old veteran at this game. During the Zubin Mehta concert as well, the same excuses were used. India wants to vandalise the beautiful garden of Shalimar, they said, and therefore the concert must not be held. When I researched, I found that the J&K chapter of the Indian National Trust for Art and cultural Heritage (INTACH) had said some renovation work was overdue and the Shalimar garden was restored according to internationally accepted methods.

The environment bogey was of course raised for the living rooms from New York to New Delhi. Within Kashmir, a whisper campaign was started that Zubin Mehta is a Jew and the concert is a joint Hindu-Zionist conspiracy to project that everything was peaceful in the valley. Mehta is, of course, a Parsi, but then rumours have a life of their own. The concert had the full support of the state government because Omar Abdullah’s political fortunes had still not nosedived. Now that the NC has failed to win any seats in J&K in recent Lok Sabha elections Omar Abdullah is no longer going to go against the popular sentiment of the valley.

Where does this incident leave the exiled Hindus of Kashmir who are hoping to go back to their homes? Back to square one, I’m afraid. The newly elected Narendra Modi-led government has made the return of the Kashmiri Pandits a priority, but given the hostilities in the valley, it seems almost impossible that the Pandits can return anytime soon. It is clear Hindus are welcome only as tourists. They can come, visit their holy sites as tourists and go back. But if they show any kind of claim over what is rightfully theirs, mayhem will follow.

This incident also exposes the farce that the Muslims of the valley want the Hindus to return and live with them. I did not hear a single Muslim voice defying Geelani’s diktat. Not one ‘liberal’ Muslim voice in the valley spoke for the rights of the Pandits to visit their holy shrine via the traditional route of Kulgam. Those who rioted on the streets of Srinagar for Gaza did not even bat an eyelid when permission for the yatra was revoked. ‘Kashmiriyat’ is long dead. I hope it gets a decent burial in the hearts of bleeding heart liberals who propose ‘Kashmiriyat’ as panacea to all the sorrows and suffering of the Pandits.

The Konsar Nag Yatra was objected to because there is no place for Pandits in the valley anymore. Their roots are slowly being erased, their temples are being destroyed, their homes have already been burnt. Kashmiri Pandits have been protesting for a long time for the passage of the Hindu Temples and Shrines Bill, long pending in the state Assembly.

The Pandits have alleged that government agencies are forcibly taking over the land and property owned by temples and Hindu religious places. Resettlement of Hindus in Kashmir is a long shot which will not happen anytime soon. In the mean time, to restore the confidence of the Hindus , this bill could be passed by the state legislature. Knowing the ground reality however, I won’t hold my breath.