About 30 years ago, a 25-year-old Uma Bharti fought her first Lok Sabha elections, and lost. The defeat proved a blessing in disguise – for the next seven years, she went underground and mobilised crowds, often catching the attention of seniors in the Bharatiya Janata Party (BJP) and journalists for her extreme views on Hindutva.

Her hard work paid rich dividends. In the 1991 generalelections, she won from the Khajuraho seat in Madhya Pradesh’s Bundelkhand region.

But brand Uma Bharti was established a year later, when she organised frenzied mobs and delivered fiery speeches that culminated in the part demolition of the historic Babri Masjid. Overnight, she was one of the faces of right-wing fundamentalism.

“My ideology is the same. I am still committed to theconstruction of the Ram Mandir (temple),” she says.

Bharti, who represents the Charkhari Assembly seat in Uttar Pradesh, is fighting her fifth Lok Sabhaelections from Jhansi, after 15 years.

This comes at a time when her party is seen shifting its stand from Hindutva to the politics of development.

Amid this change, Bharti appears to be sidelined in her quest for the Ram Mandir. Now, through her speeches and interviews, she is indicating a mellowed version of her former self.

At local legislator Ravi Sharma’s palatial bungalow, she is seated next to her spiritual guru, the Udupi Pejawar Mutt’s Swami Vishvesh Tirtha. Ram Lal, the BJP’s organisational secretary, had specially flown in the short and lean guru to bless Bharti.

Tirtha had administered her oath of celibacy. Her aide says before each election, she seeks the blessing of her guru. So far, the blessings seem to have served her well – she has seen success in four parliamentary and two Assembly elections. Twice, she had routed former Madhya Pradesh Chief Minister and senior leader Digvijaya Singh; this earned her the title of “giant slayer”.

Tirtha’s blessings, however, couldn’t prevent her eviction from the post of chief minister and, eventually, from expulsion from the party. “I tried to be clever with others, but I ended up being a buddhu (foolish). I have decided to remain my natural self,” she says, her feet resting on a chair opposite her.

She says this time, there’s a difference in the way electoral battles are being waged. “For the first time, elections are being fought on the development plank. It is so beautiful; so democratic,” she says in impeccable English.

Bharti uses a helicopter for canvassing, but is critical of money power in elections. “Money is playing a bigger role. We never used to think polling booth agents had to be paid, professionals had to be hired and marketing had to be done.”

She says earlier, she tried to ape the style of other politicians, especially the way they tilted their necks and paused during speeches. Finally, however, she gave up these, terming the style “artificial”.

To campaign in her constituency, Bharti now takes off in a white Scorpio. The convoy, comprising 10SUVs, makes its way through the narrow and crowded roads, leaving behind the large, ubiquitous hoardings of her rival Pradeep Jain, Congress leader and minister of state for rural development.

Others in the fray in the same constituency are Anuradha Sharma, Bahujan Samaj Party candidate and widow of an influential businessman; and Chandrapal Yadav, a close aide of Samajwadi Party chief Mulayam Singh.

“The fight is tough. Didi’s (as Bharti is known in the party) campaign started late due to confusionover her fight against Congress president Sonia Gandhi. She might sail through in the Narendra Modi wave, but only if she campaigns real hard,” a party acolyte says, as we struggle to keep pace with Bharti’s speeding convoy.

Her security personnel and local policemen ask those on the streets to give way to the leader; they have to struggle to prevent them from approaching very close.

Locals say despite being a national leader and from the other backward classes (OBC), Bharti is third in terms of the likelihood of a win here, after Sharma and Yadav. The BSP’s machinations present a challenge for Bharti, as the constituency is dominated by Brahmins (Sharma belongs to this community), followed by Dalits and OBCs. Sharma belongs to the first category.

Disparagingly, many have termed Bharti a “pardesi chidiya (foreign bird)”. Bharti scoffs at such theories. 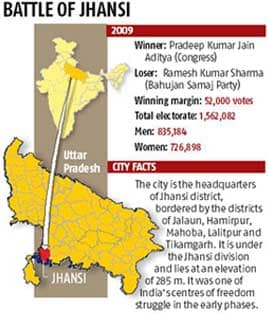 After being introduced to party workers and locals, she visits the houses of a few supporters, where she is warmly received. Here, she tries to strike a chord with the women, taking friendly jibes at their men. “People expect women to be docile but I don’t do ‘ooh la la’ and ‘ayi ayi yo’…I am a hard task master. So, people think I am temperamental,” she tells a gathering of 60-70 women who have decided to volunteer for the party. She tells them she is has dual roles to play – those of a sadhu and a politician – and steps into these character according to the situation.

In her short speeches, Bharti carefully skirts the issue of Ram Mandir but not without invoking the name of Ram. “Former prime minister Chandrashekhar would say ‘people take Ram’s name to come to power, but don’t know how to carry out development’. Modi has proved those who believe in Ram and have faith in him are also capable of development.”

“When Modi will become prime minister, this sadhu will stand at his doors and beg before him until he gives me a separate Bundelkhand state,” she says, drawing loud cheers.

Walking to the next meeting, Bharti looks tired. Amid rousing chants of “Narendra Modi Kashi mein, Uma Bharti Jhansi mein (Narendra Modi in Kashi, Uma Bharti in Jhansi)”, her identity seems to have been dwarfed.