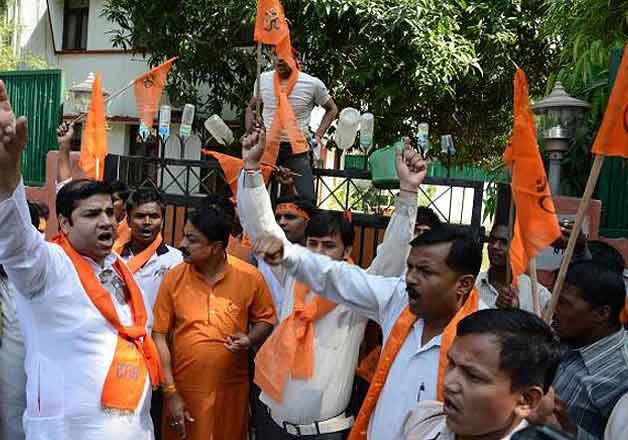 Allahabad: Kicking up a controversy, the Vishwa Hindu Parishad on Saturday said the fort built by Mughal emperor Akbar on the banks of the river Yamuna in Allahabad is a “symbol of subjugation of Hindus” and wanted the imposing structure to be replaced with a night shelter for poor pilgrims visiting to have a dip in the holy Sangam.

“During Muslim rule in India, countless temples were pulled down and replaced with mosques. These mosques were erected as symbols of subjugation of Hindus. The VHP had sought to remove only three of such symbols – at Ayodhya, Kashi and Mathura. The Fort situated nearby is another such symbol,” VHP patron Ashok Singhal said.

Singhal was speaking at a ‘Virat Hindu Sammelan’ organised at Parade Ground in the vicinity of the Sangam and the fort, to mark the golden jubilee of the establishment of the Sangh Parivar outfit.

“Why should there be a fort so close to the confluence of Ganga, Yamuna and mythical river Saraswati, where Hindus come from across the country every year to take a holy dip on festivals and where millions converge whenever the Kumbh Mela is organized?” the VHP patriarch asked.

“Everybody knows that this fort was built to commemorate a Mughal emperor’s victory over Hindus,” Singhal said, alluding to the Second Battle of Panipat in which Akbar had defeated Hemu, a Hindu king, thereby establishing the hegemony of the Mughal Empire across north India.

He alleged that the “Akshayvat” – a banyan tree which is held sacred by Hindus – was “made inaccessible to devotees through the imposing structure”.

“Even today, people are being fooled in the name of allowing worship at the Akshayavat as the original sacred tree is situated in deep, inaccessible corners of the fort. Why should not the structure be replaced with a ‘rain basera’ (night shelter) for poor pilgrims who sleep in the open in cold weather to have a holy dip at the crack of dawn on bathing festivals,” Singhal added.