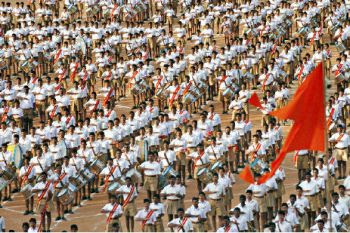 RAIPUR: Amid chanting of religious hymns, late BJP leader Dilip Singh Judeo’s son washed feet of tribal Christians on Sunday to mark their return to Hinduism at a Hindu religious meet organized by Dharam Jagaran, an organization backed by the Rashtriya Swayam Sewak Sangh (RSS), at Pathalgaon in tribal Jashpur district in Chhattisgarh.

Nearly 1,200 Christians returned to Hindu fold at the sammelan where pujas were performed and the late BJP leader’s son, Prabal Pratap Singh Judeo washed the feet of those who embraced Hindiusm, the organizers claimed.

As Prabal Pratap leads the ‘Ghar wapsi’ campaign, he is following the footsteps of his late father Dilip Singh Judeo who had aggressively campaigned on the anti-conversion theme that gave him popularity among tribals. Speaking at the Ghar wapsi programme, Judeo said, “I was in America for 12 years. I came to India and decided to carry forward the legacy of my father, who had led a crusade against religious conversion of tribals and made relentless efforts to preserve their rich Hindu traditions. Hinduism is a way of life and not just a religion.” He exhorted people to observe caution against allurements and any influence whatsoever towards any efforts for religious conversions. Later, Judeo told TOI, “My father Dilip Singh Judeo had led a campaign in Chhattisgarh, Jharkhand, Odisha and other states for re-conversion of tribal Christians into Hinduism. My effort is to strive towards this cause.”

During undivided Madhya Pradesh and later after formation of Chhattisgarh, Dilip Singh Judeo’s campaign had sparked controversies with Christian organizations dubbing the programme as a stunt for political gains as they also questioned claims of number of people returning to Hinduism at these programmes. Three years after the BJP came to power in December 2003 , the state government enacted a legislation-Chhattisgarh Freedom of Religion (Amendment) Act, 2006.