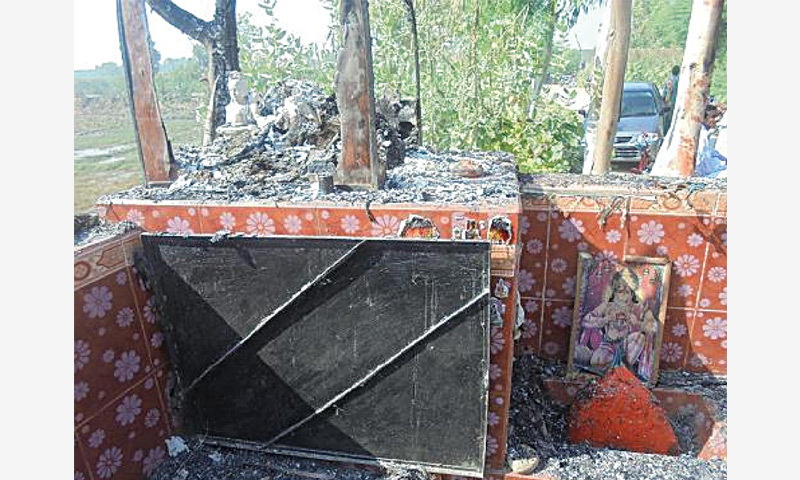 Ash is scattered round a barely visible idol on the raised platform and the floor of the small temple which was torched in Tando Mohammad Khan in the early hours of Friday. – Dawn photo
KARACHI: Patron-in-chief of the Pakistan Hindu Council and Member National Assembly Dr Ramesh Kumar Vankwani has strongly condemned the torching of Hanuman temple in Tando Mohammad Khan, according to a press release by the Pakistan Hindu Council.

In a statement issued on Saturday, Pakistan Hindu Council requested the government for provision of security of Hindu worship places at national level, adding that around 1,400 Hindus religious sites across the country were in dire need of protection by the government.

Dr Ramesh furthermore regretted the burning of Holy Books Geeta and Ramayan during the tragic incident.

He emphasised that if the Supreme Court’s orders regarding protection of minorities’ rights were strongly implemented, then such incidents could be avoided.

He further questioned as to why innocent minorities were left at the mercy of anarchists.

Earlier on Friday, a small Hindu temple of Hanuman in Tando Mohammad Khan town was torched, sparking protests by the enraged Hindu community and nationalist parties.