HOUSTON: It is a tale often told and has played out on stage for centuries, and it has become a tradition in the Bayou City over the past decade as the region’s Hindus go through all the celebrations that culminate in the sparkling, fireworks spectacle of Diwali. For centuries, Valmiki’s Rama Leela has reminded the faithful of the trials and tribulations of Rama and the lessons inherent in it to become a perfect man, to have self-control and become, like Rama, the Lord of Virtue, the Maryada Purushottama. 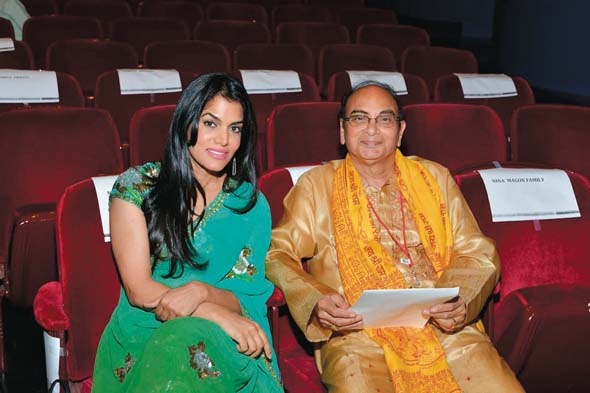 These virtues are what are held dear to the heart of Dr. Arun Verma and the Shri Sita Ram Foundation, as they have brought the Rama Leela to the masses over the last few years. The devotion to the core values found in the Valmiki’s Ramayana have led Verma to build on the lure of the Diwali season by adding a Dussehra festival that is now in its third year at Skeeters Park in Sugar Land and brought in over 10,000 people (see IAN dated October 10, 2014).

At that mega event held a fortnight ago on Saturday, October 4, there was a precursor to the Rama Leela play on a stage in the middle of the ballpark. Last Sunday, October 12, the same actors played out the entire Rama Leela, in their golden costumed splendor to a crowd of devoted attendees. It was a departure from the play that was staged two years ago at the Wortham Center downtown, but a return to the roots of the play at Cullen Auditorium at the University of Houston’s Main Campus. 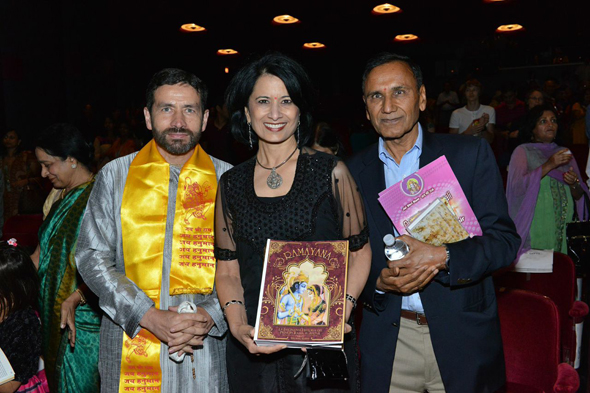 And it was a return to the roots of storytelling too, as the tale unfolded under the direction of the artist Rathna Kumar, with Assistant Director Kiron Kumar and Technical Director Nik Nikam. This version of the Rama Leela that was staged in 23 acts was different from the ones performed in previous years in its simplicity of language and the brevity of its length, lasting just under two hours, although the entire event was slightly longer to provide an introduction to the production and some honored guests.

The heavy rain that engulfed the city on Sunday afternoon certainly dampened out the enthusiastic crowd that usually linger outside in the small plaza in front of the auditorium, and may have led to a smaller attendance, but the fervor was still there in the organizers, with a idol of Ganesh planted in the lobby for homage and volunteers passing out LED diyas and prasad to people entering the hall. The Indian Consul General Parvatheneni Harish spoke for a few minutes, as did the University of Houston Chancellor and President Renu Khator about the relevance of Rama Leela and giving Diwali greetings to all. 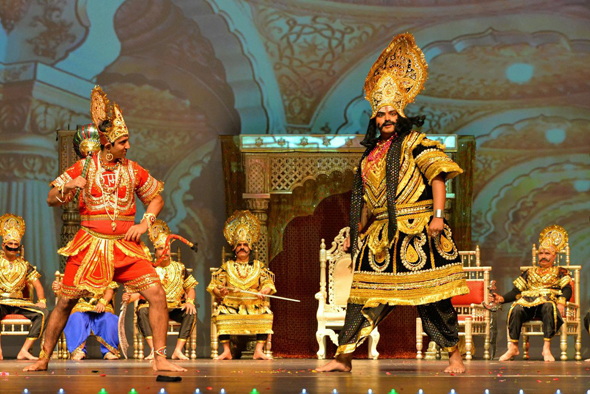 A special element was the official launch of the just-printed Spanish version of the Ramayana translated by a Bolivian ardent of the Vishva Vaishnava Raj Sabha, Reynaldo Cuadros Anaya who has been initiated as Ranga Puri das 35 years ago. It has taken him 21 years to translate Valmiki’s Ramayana from the original Sanskrit and he spoke of his pursuit and concluded with by reciting a verse in Sanskrit and imploring “Sri Sita Ram Lakshman Hanuman ki jai”.

The play got off to a start with an introduction by Verma’s daughter, Nina Magon, an interior designer who had also participated in the NBC reality show “American Dream Builders” last season. She set the stage for the first act as the Sage Vishwaamitr asks King Dashrath to protect his ashram from demons. From there on till the end scene when the actors lined up for a final bow and pictures, the play worked through the major scenes that reflect turning points for the story and narrowed down the often lengthy performance to a much shorter length.

In doing so, the directors decided to do away with many of the props and theatrics that have been used in previous years, like Hanuman flying through the air on a harness carrying the mountain, or the fire dancers and symbolic burning of the demon effigies. Instead, the audience was left to visualize the pantomime, as when berries are picked and placed in imaginary baskets and the place of exile and its daily rituals are depicted by a change in costumes and a simple stone and tall plant.

In fact, the whole play leaned heavily on the use of projected backdrop slides and video clips to bring the imagination to life and this allowed the viewers to understand the lessons that were being depicted – like the Dutiful Son, Keeping Your Word, the Love and Devotion of a Husband and Wife and Brotherly Love – rather than get lost in the visuals. The production also cut down on the number of dances performed during the play to one, and allowed three short ones by students of Rathna Kumar’s Anjali Performing Arts, to run together at the end.

The performers showed that they had rehearsed their lines and moves for many weeks and the six little boys who came to portray the monkey army were greeted with cheers and applause. The actors portraying Dashrath, Ram, Sita, Hanuman, the dual role of Kaikeyi-Shuprnakha and Ravana (who does not come onstage with his ten heads) were well played but the roles of Ravana’s son and Indrajit and Lakshman were played with the vigor and strength that belongs to those characters. At the end, the Ram Rajya court took its place as rose petals fell from the sky.