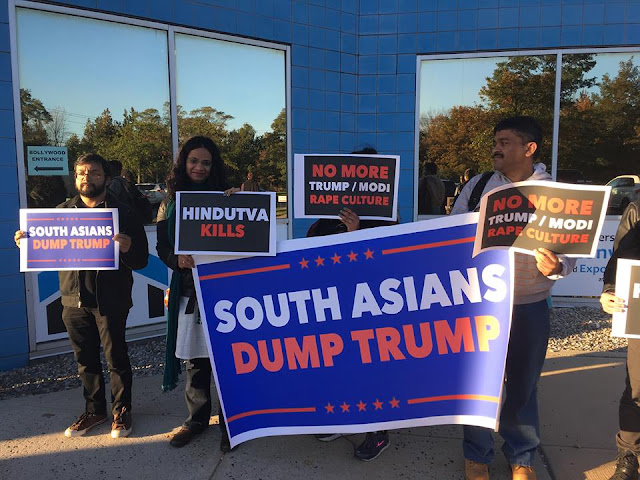 Saturday, Oct 15th, 2016 – A crowd of nearly 10,000 Hindus assembled to hear Donald Trump speak at the Republican Hindu Coalition rally in Edison, New Jersey.  Donald Trump let the Hindus of American know that under his presidency they would have a friend in the White House and that he would make the USA and India “best friends”. 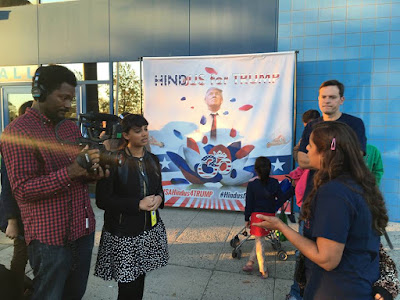 However the rally was attended by a leftist protest group known as the “Alliance for Justice and Accountability” (AJA), many of the members being students of the City University of New York (CUNY). The main purpose of the AJA is to demonize Hinduism as being inherently caste based, and also to promote the proven to be false claim that the current Prime Minister of India, Narendra Modi, conducted a genocide against Muslims in his home state of Gujarat.  But the group has also taken a special interest in defaming and spreading false information about the Hindu holiday of Diwali, specifically claiming that Diwali is a holiday that celebrates genocide. 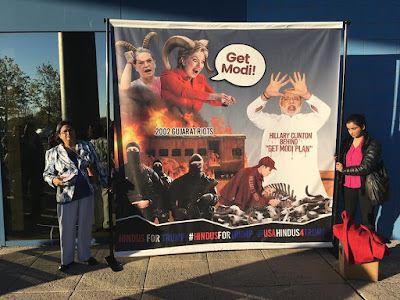 In 2002, when Modi was the Minister of Gujarat state, a mob of more than 30 Muslims set fire to a train full of Hindu pilgrims, including women and children, killing 59 people. Due to the heinousness of the act, and because it was a targeted attack on Hindus, spontaneous riots broke out across the state of Gujarat, leaving more than 1,000 Muslims dead. Many tried to accuse Narendra Modi of orchestrating these riots against Muslims, however a Special Investigation Team (SIT) found no evidence against Modi and no court in India would take the case. Hillary Clinton herself tried to get Modi convicted of genocide, but even after enlisting several NGO’s to look for evidence of mass Muslims graves, all she was able to come up with were piles of old buffalo bones! No investigative team, inside or outside of India, was able to find evidence that Modi planned a genocide against the Muslims of his state because he didn’t, these were spontaneous riots created by Muslims who decided to burn a train full of mothers and babies.

One AJA group members, Thenmozhi Soundararajan, spoke to the Gurdian News at the event and made it clear that the group sides with the Islamist tyranny of Pakistan against secular and democratic India. Referring to the nearly 100,000 Hindus who have been cleansed from the district of Kashmir by Pakistani backed Muslim militants since 1989, the Guardian reports:

Soundararajan criticized how the RHC framed violence in Kashmir as a conflict that pits the aggrieved Hindu victim against Islam in a disputed territory embroiled in an ongoing struggle for self-determination.

Pakistan, the nation responsible for initiating the anti-Hindu pogroms in Kashmir, is a constitutional Islamic Republic where only a Muslim can become the President. State sponsored textbooks routinely demonize non-Muslims and non-Muslims are often the victims of the state’santi-blasphemy laws. According to a report by the Movement for Solidarity and Peace in Pakistan, nearly 1,000 non-Muslim young girls are abducted, raped and forcibly converted to Islam in Pakistan every year; these forced marriages are usually upheld by Pakistan’s Islamist courts. This is the “Islam” Soundararajan is referring to in her above statement, Pakistani supported Islamism.  India on the other hand is of course a non-religious democracy where anyone can become president and there is no state sponsored oppression of any religion.
THE DEMONIZATION OF DIWALI? 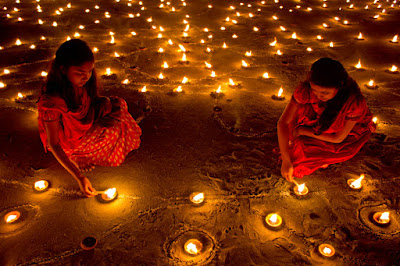 Besides being a friend of Pakistani Islamism, Thenmozhi Soundararajan is also a self-proclaimed “Dalit” or “untouchable”.  She goes by the name “Dalit Diva” on twitter. The Vedas never prescribe any “caste system”, and there is certainly no such word as “Dalit” in the Vedas, however, at some times and in some places in Hinduism, there has been the erection of caste systems which were discriminatory.  The caste system in Hinduism can be analogized to the “Curse of Ham” in Christianity.  During certain periods of Christian history, it was taught that black skin was a curse from god upon the descendants of a villainous biblical character named Ham, however the curse of Ham is not found in the bible and is a superfluous doctrine which arose during certain periods of time in Christian history. The same is true with the caste system, there is no law of caste in the Vedas, just as there are no dogmas in the decentralized and pluralistic faith of Hinduism.  With our many holy books and disparate gurus, Hindus are free to choose their own theological path and many today have completely abandoning the caste system out of free choice. Thenmozhi Soundararajan calls herself a “Dalit” by choice, no Hindu at the Trump event or in America (any many not in India) would give her this label.
If Thenmozhi Soundararajan were simply drawing attention to the discriminatory doctrine of caste and making arguments for why it should be abandoned, she would find no opposition among most Hindus. But that is not Thenmozhi Soundararajan’s agenda, her agenda is to promote a false racialization of Hinduism and defame Hindu holidays as being celebrations for genocide. In her statement to the guardian, the “Dalit Diva” says:

Soundararajan said the event’s celebration of Diwali suggested that attendees were mostly upper caste, thus excluding South Asian communities who have been marginalized by the caste system, which places people into a hierarchy based on birth and has been used to oppress lower caste and Dalit communities in India and the diaspora.“Diwali and Dussehra are both upper-caste holidays that celebrate the death of tribals and the ascent of Aryan culture over Dravidian culture,” said Soundararajan, a Dalit American artist and activist. “In many ways Dalit communities do not celebrate this event – it’s literally about the killing of our people.”

Soundararajan’s statement shows she subscribes to the fallacious “Aryan vs Dravidian” myth which states that northern Indians are “Aryans” who invaded India and imposed “Hinduism” upon the southern Indians who she refers to as “Dravidians”.  However, there is one problem with Soundararajan’s theory and that is DNA evidence proves there are no genetic distinctions between northern and southern Indian, all Indians today are pretty much the same ethnicity, genetically! If there were ever an “Aryan” invasion as Soundararajan claims (a disputed theory), then this Aryan race has since completely disappeared, mixed throughout India, and Soundararajan herself is just as “Aryan” and “Dravidian” as any other Indian of any caste or color (give or take 20%).
Now if this bygone race of “Aryans” did ever exist (against a disputed theory), then they did not practice “Hinduism” but something called “Vedism”, meaning they believed only the the Vedic gods. However Hinduism today is not Vedism, it is Hinduism because it is a blend of Vedic gods and tribal gods, tribal rituals and tribal practices. Many sects of Hindus, including many Shiavites, do not even recognize the Vedas as authoritative, yet they are still considered Hindus. So “Hinduism” is just as mixed “Aryan” and “Dravidian” as any Indian bloodline. 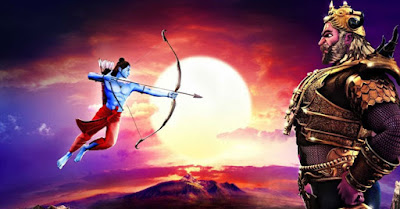 So with this information in play, how does Soundararajan try to state that the Hindu holiday of Diwali celebrates genocide?  The Guardian article links to a resource which implied that the story of Diwali found in the Ramayana, where the Hindu hero Rama goes to the south of India to defeat the demonic king Ravana, is actually a story of northern Indian supremacy over South India.  However there is a really big hole in this accusation, and that is the fact the the writer of the story, Valmiki, was himself a Hindu from South India and also a “Dalit”.  Why would a southern Indian write a narrative of south Indian inferiority?  Also, Ravana is not considered evil or bad by Hindus, he is celebrated for being a learned scholar of religion and sciences and a good ruler, he was only a bit arrogant and fell from grace by kidnapping women. Indeed, in the Ramayana, king Ravana himself obtains moksha (holy liberation) because in the end he was able to recognize his weaknesses.  Diwali celebrates this divine play, the triumph of good over evil, of wisdom over arrogance, and not some racial or ethnic cleansing. Anyone interested in learning about the story behind Diwali can watch the Ramayana in English at the link below.
WATCH RAMAYANA
STORY OF DIWALI
So in conclusion we can say that Thenmozhi Soundararajan and her fellows as the Association for Justice and Accountability are simply manufacturing false accusation against Modi and against Hinduism.  Thenmozhi Soundararajan is a “Dalit” because she wants to call herself that, even though genetically she is closely related to every other Indian Hindu on earth, and many Hindus would never categorize her or themselves as any caste whatsoever… just as Hindus, period. As for Soundararajan’s claim that Diwali celebrates south Indian genocide, well she will need to take that up with the south Indian poet who wrote the story, Valmiki.  In reality, the likes of Soundararajan and her ilk at AJA will have no logical explanation for their absurd theories, because they are not trying to show truth, they are simply anti-Hindu and will do anything to spread hatred of anything which does not fit their leftist narrative.
Source: http://hindusfortrump.blogspot.in/2016/10/anti-trumpanti-hindu-activists-defame.html