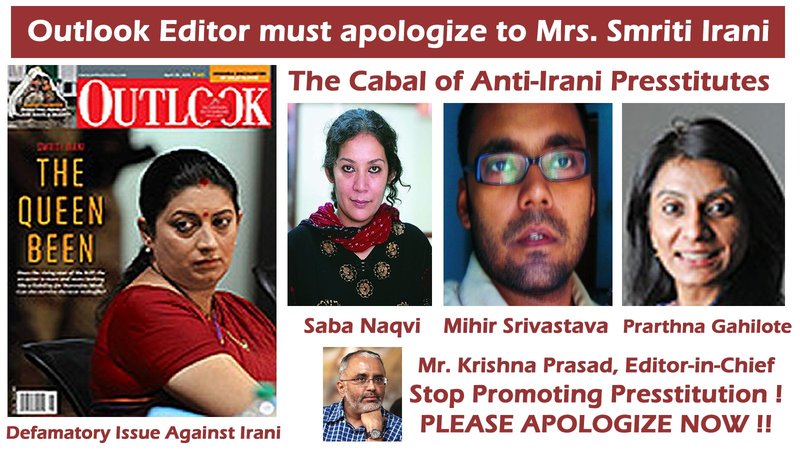 Please sign this petition, and forward to all your friends.https://www.change.org/p/editor-in-chief-outlook-apologize-to-mrs-smriti-irani-and-print-it-in-your-next-issue[ *NOTE: This is formal complaint against Outlook to be submitted to PressCouncil of India prepared by a legal professional. As per their rules, the Editor must be petitioned first, and there is a wait of 4 months after that. To be effective, the due process must be followed.* ]​Dear Editor,The below complaint is with reference to what seems like an angular approach on Union HRD minister and her performance.In your April 20, 2015 edition, Outlook ran three articles including a cover story on the current Union HRD minister. While Article 19(1)(a) implicitly guarantees the press freedom of expression and in the case of the press, it could even prescribed to a duty to critique and bring forth the shortcomings of be it the Govt. or politicians, all such reporting should be backed by irrefutable evidence. While the press is rightly protected against defamation in such a contexts, exploitation of such a protective measure is not in the right spirit.There seems to be a malafide intent and bias from the very beginning of the cover story, Smriti, A Fading Memory? In the very opening paragraph the article says, Smriti Irani, having been made a cabinet minister, acceptedcongratulations “as if it was her due”. Neither is the verbatim of her being “kicked out” is not in good taste. Very interestingly the story goes on to cite grave allegations on the basis of various “anonymous sources” making allegations against the minister.The article clearly voilates the Norms of Journalistic Conduct laid down by the Press Council of India.