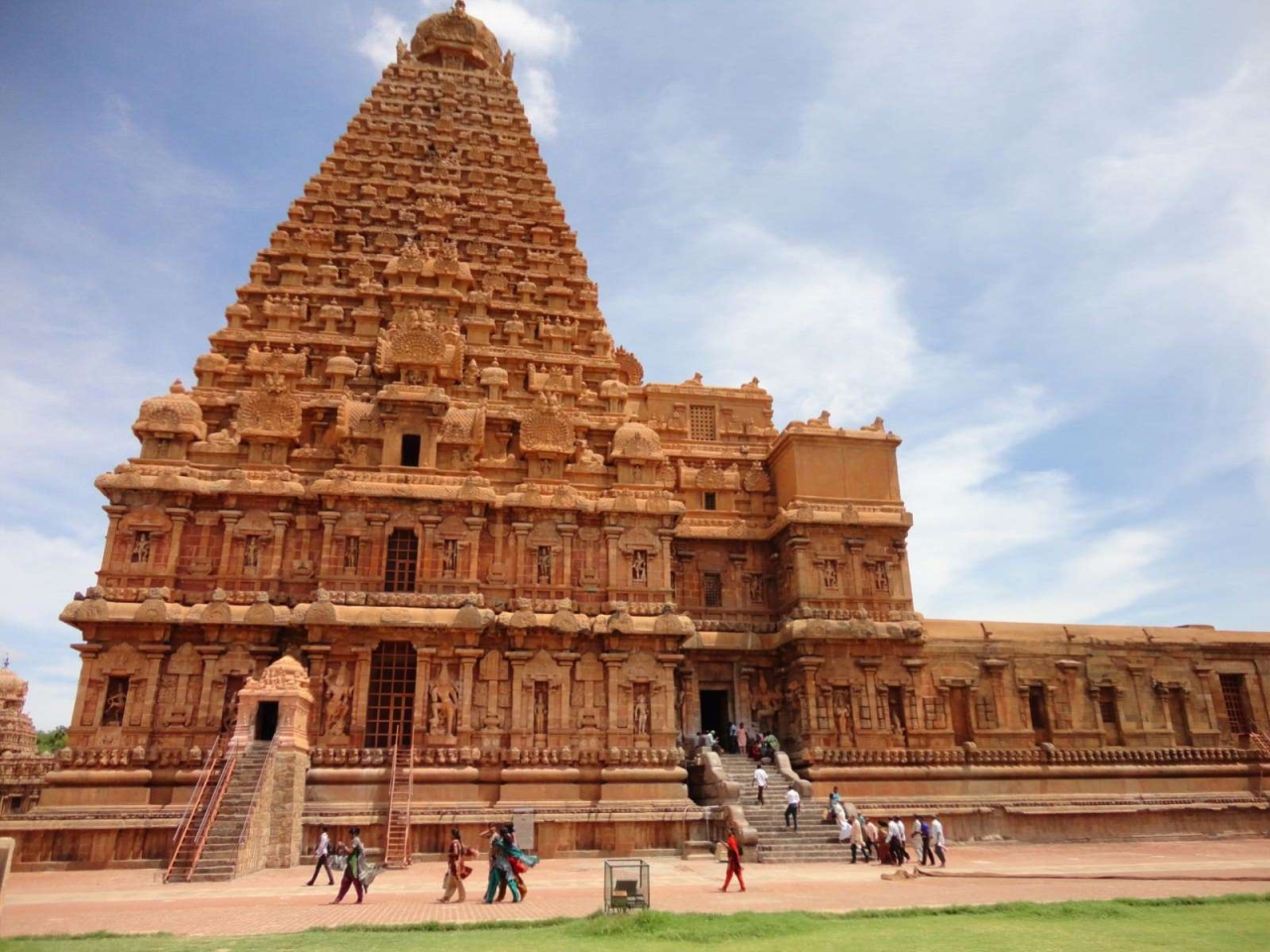 On 29 April 2018, the ceremonial procession that takes the ruling deity of Thanjavur’s Brahadeeshwarar Temple for a ritual bath in the adjoining Sivaganga temple tank, was stopped. The procession, complete with the playing of the nadaswaram (a classical wind instrument), was stopped by the authorities of Schwarz – an eighteenth century church built by Danish missionary, Friedrich Schwarz.

Schwarz was an interesting character, who often projected himself as gentle and suave. He was a part of the political missions of the East Indian Company, being often sent as an emissary. While most of his hagiographers praise him as a selfless missionary, it is easy to see him as a manipulator who prevailed over the ‘native rulers’, by influencing them positively towards the colonial forces and keeping them away from any rebel influence. In fact, the British East India Company made Schwarz a member of the council of administration for Thanjavur. He, on his part, tried his best to convert the king, who, while gently refusing his religious advances, used him more as a trustworthy intermediary in dealing with the British. (Of course, the usual Evangelist propaganda that the king was convinced of Christian superiority, but did not convert because he feared the Brahmins, has always been part of the mission hagiographies).

More relevant to this point is that this colonial missionary took pleasure in going to the places of “heathen feasts” where thousands of “Hindoos” would gather for worship and preach Christianity, condemning what he understood through his Christian hatred as “idolatry”. So, when Schwarz church authorities stopped the procession of 1,000-year-old Brahadeeswarar temple, it was colonial evangelism once again.

To understand this, one should realise that evangelical Christianity is always at war with Hinduism. To them, Hinduism is a religion to be destroyed when the opportunity comes and tolerated not even respectfully. but only tactfully till then. During the period of tolerance, preparations are made for the period of war – the war that can be declared when it is advantage Evangelists.

So the war against Hinduism waged by Evangelists in India can be divided into three periods. Between the late 17th to mid 19th century, when the colonial Evangelists attacked Hinduism, while simultaneously using colonial enterprise to politically, militarily and financially support the mission.

Then came the period between 1857 and 2004 when Evangelists moved from direct war to covert war. The covert war takes the form of many mini-wars in isolated areas throughout India where Evangelists have power through demographic change and political influences. For example, in Tripura, Christianity made Jamatiyas refugees in their own land for refusing to accept the Jesus cult. In Mizoram, Hindu Reangs were driven away as refugees and made to face ethnic extinction. In Odisha, the Maoist-Evangelical axis has been established to combat Hindu tribals.

The national movement between 1857 and 1947 definitely acted as a great emotional and intellectual barrier to the evangelical war. Gandhi and Veer Savarkar, otherwise poles apart, held very similar views on conversion – as political aggression on souls. Veer Savarkar considered this loss as more dangerous than territorial loss. Dr B R Ambedkar, despite being a strong critic of Hinduism, did not mince words when he said that conversion to Christianity denationalised the scheduled communities and compromised national security.

Evangelists waited for a time of their choice to declare war on Hinduism, and in the meanwhile, cultivated forces that would hasten the blowing of the war trumpets. In this process, different evangelical organisations wielded a thousand cuts on the Indic body through seemingly secular anti-Hindu pro-evangelical forces. Riots happened throughout India and any counter attack by Hindus alone got sensationalised as persecution.

For example, when Christian terrorists gunned down an entire family of 16, including seven-year-old girl in a cold-blooded massacre for celebrating harvest festival, it was seldom condemned. Nor did it create an outrage. One should contrast this with the outrage generated nationally and internationally over the accidental, but definitely inhuman and unjustifiable, killing of Australian Hindu-phobic missionary Graham Staines and his son, when angry tribals, whose families were torn by conversion torched his vehicle. Some of the canards spread by Evangelists against Hindus in this conflict are time-tested hate propaganda like, for instance, the charge of poisoning a well – originally a Christian anti-semitic tactic which was effectively employed in instigating violence against the Jews in pre-holocaust Christendom.

In Tamil Nadu, Evangelists been waging the war on different fronts, and all their efforts converge at one point or the other in the physical curtailment of Hindu human rights. As early as 1980s, the converted Indian Christians of the coastal region were used by Christianity to block all the ceremonial sea rights of Hindu goddesses. In 1982, Christian fanatics planned and molested Hindu women during a Hindu festival, and the Hindu retaliation was swift and equally violent. This mellowed down the Evangelist assault on Hindus, but it never ceased.

At another level, Evangelists were waging the war by proxy through Dravidian forces. Swami Chidbavananda, the great spirtual acharya, educationist, and social reformer pointed out how the Catholic church openly declared the Dravidian movement as a ‘time bomb’ set to destroy Hinduism in their book, titled Dravidian Movement and Catholic Church (Tamil). The war against Hinduism in Tamil Nadu took the form of a concerted strategy involving some well-placed academics, politicians, activists and Evangelists coming together. The aim is to reduce Hinduism to ancestral worship and project all its spiritual dimensions as Brahminical distortions to exploit people. Through this, even a fanatical Christian could claim that he or she can enter a Hindu temple as it is nothing more than a glorified mausoleum of ancestral worship.

This blatantly false theory is coupled with racist Tamil pride and peddled in a hysterical way by the political parties like ‘Naam Tamilar’. Further, hymns like Thiruvasagam are misinterpreted by the Christian clergy straitjacketing them into Christian monotheism. Hindu sacred spaces – in literature and liturgy, in ceremonial processions, and in physical area – are all encroached upon by Evangelists or proto-Christian Dravidianists. So when ultimately the physical violence descends, the local Hindus are left to defend themselves – often becoming homeless orphans in their own country.

After the Janata Party (BJP) lost power in the Centre in 2004, Kanyakumari district saw a spate of attacks on Hindu temples – mostly village temples.

Here is one such incident that took place in 2007 in Kanyakumari district and that would resonate in Thanjavur in 2018. However, unlike in Thanjavur, where the police forces were not yet inclined to stop the Hindus, in the Kanyakumari village, coincidentally or strategically placed police officials who happened to be Christians, violently stopped the Hindus. The procession of a goddess belonging to a centuries old temple was stopped by a handful of Christians claiming the road the procession was to pass through belonged to the church. Despite the village panchayat having constructed the road, despite Hindus being the majority in both the villages, especially in the area in question, and despite the panchayat well on that very road having been built by a local Hindu, the Hindus along with their deity were stopped by the police and in the ensuing violence, a woman was killed in police lathi charge. 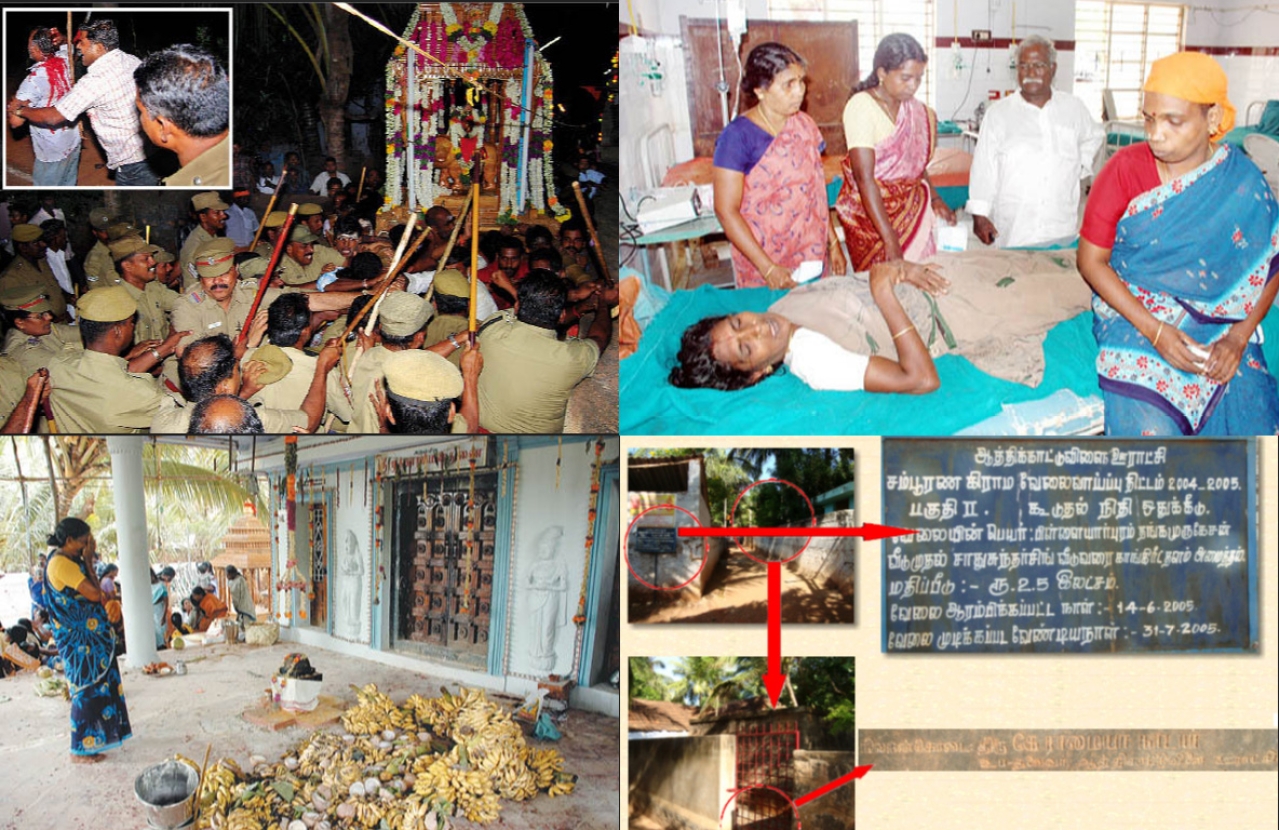 All political leaders except the Hindu organisations and BJP deserted the Hindus. The tragic irony is that Hindus have been stopped from using a road which they themselves built. It could be only said that such an incident is only waiting to happen in Thanjavur.

Even in places where Hindus are a majority, Evangelist warfare strategically first weakens them – even preventing the development of a sense of national unity that may loosen the hold the church exerts on the flock. A case in point is the very recent diatribe that the church has indulged in against the patriotic salutation Jai Hind, incidentally coined by a Tamilian – Dr Chenbagaraman Pillai. While many Hindus are aware of the anti-Vande Mataram mindset of Islamists, not many are aware of the anti-Indian mindset that is deeply integral to even mainstream churches including the Catholic church leave alone the innumerable ground-warrior Christian evaneglist cults.

For example, the Catholic Bishop Council of Madhya Pradesh has come out strongly against the raising of Jai Hind slogan in the government schools. Father Babu Joseph, former spokesperson of the national bishops’ conference now based in Madhya Pradesh, criticised the government for asking government schools to raise the slogan. Mumbai based ‘Catholic-Christian Secular Forum’ in its website claims the following about Jai Hind:

The commonly used slogan Jai Hind emerged during India’s independence struggle and continues to be raised at the end of national anthem. However, Hind is a shortened form of Hindustan (land of Hindus) that excludes India’s religious minorities such as Christians and Muslims.

So, while in Tamil Nadu, the deity is stopped physically, in North India, where Evangelist Christianity is yet to achieve the muscle power and political clout, it uses ideological aggression to stop nation-building through very simple methodologies.

That such aggression is starting to become visible and violent in Tami Nadu is not coincidental. Already, various Christian denominations including the mainstream churches have started preparing for the 2019 elections. Away from the willingly closed eyes of the media, Catholic Archbishop Anil Couto of Delhi sent a pastoral letter which was read out on 13 May in all the parishes of the national capital. The letter called on Catholics to start a campaign ahead of elections due in April 2019. This year-long vigil and campaign though couched in secular language is a call for an Evangelist war on Hinduism.

So, after 2019 in case of a BJP defeat, Hindus in Tamil Nadu can expect a concerted attack on all their temples – small or big, in all their sacred spaces – in villages or town, in all their ceremonies. Hence, in the context of 2019, Hindus need to realise two factors:

Aravindan is a contributing editor at Swarajya.