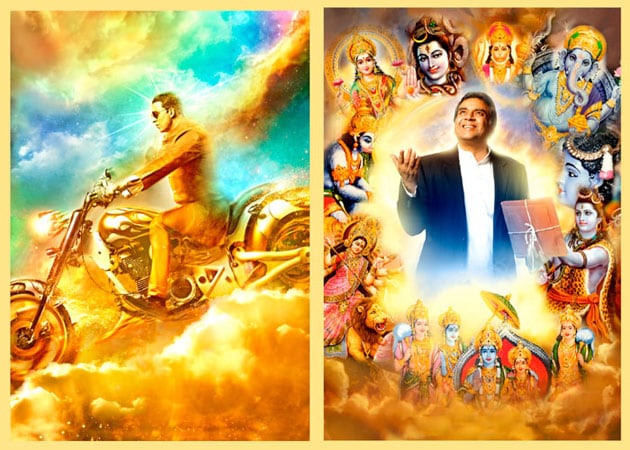 There is perversion of ‘Ramayana’, a Holy Scripture revered by billions of Hindus in the film titled ‘Ram-leela’ directed and produced by Sanjay Leela Bhansali. There are many scenes and songs in this film, which are vulgar and denigrating Hindu Deities. Billions of Hindus therefore, felt that such film should not be released for which Hindus staged agitations using different methods; by submitting representations to the concerned authorities, holding demonstrations etc. besides fighting legal battle. Still, the director found a loophole by making slight change in the name of the film and released the film on 15th November. It has now been proved on number of occasions that religious sentiments of Hindus have no value whether it be their films, plays, advertisements, books or anything else; but religious sentiments of only non-Hindus are taken care of. If we see the trend of films in past few years, it is observed that with the support of Congress rulers, international conspiracy is being hatched to destroy religious inclinations of Hindus !

Few months back, a film titled ‘Vishwarupam’ was released; but even before its release, the Chief Minister of Tamil Nadu, Jaylalita made hue and cry about the film having scenes which would hurt religious sentiments of Muslims and imposed ban on the film. She gave reason that if the film was released, it could create law and order problem. Petitions were filed in Courts in Karnataka and Andhra Pradesh and film’s screening was immediately stopped. Similar case had happened with an English film titled ‘Da Vinchi Code’ few years ago. The then ruling Government in Goa promptly imposed ban on this film giving reason that the film could hurt religious sentiments of Christians. On the contrary, when Hindus express their feelings about certain film or play that should not be released as that would hurt their religious sentiments, no Government either State or Central show any regard and stop its release. At such times, words like ‘one’s freedom of expression’ are used. Shiv Sena opposed Shahrukh Khan’s film ‘My name is Khan’ for supporting Pakistan, our enemy country and it was released under police protection. Why, because Khan is Muslim and has right to express his feelings. Hindus, however, have no such right. When one Court imposed ban on ‘Ram-leela’, another senior Court lifted such ban; whereas, Court granted 15 days stay in case of ‘Vishwarupam’. If these incidents make one feel that even judicial system is discriminating against Hindus, will that be wrong ?

In Bollywood, a person maintaining ‘shendi (tuft of hair on head)’ is deliberately shown as a bad person. Religious people are purposely shown in negative way. Few examples of these are films like ‘Oh my God’ or ‘Deul’ in Marathi owing to which especially Hindu youth is influenced to go against Dharma by destroying their religious sentiments towards Dharma. It is an international conspiracy to take Hindus away from their Dharma !

It is in the hands of Government to stop such things; but they have covered themselves with a veil of secularism; therefore, they purposely avoid taking any action. In Hindu Rashtra, however, Hindus’ religious sentiments will count !